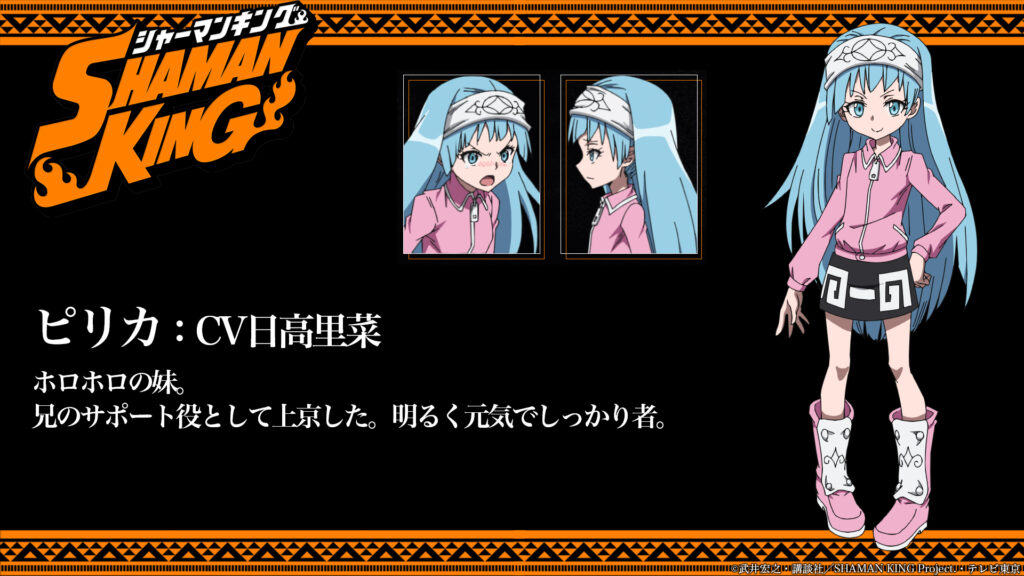 The new Shaman King anime series remake has been slowly rolling out cast information, with quite a few people returning from the original series. On Thursday (Japan Time), they introduced Pirika, who will be played by Rina Hidaka.

Pirika (also spelled Pirica or Pilica) is the younger sister of the shaman Usui ‘Horohoro’ Horokeu and a member of the Ainu from Hokkaido. When Horohoro moved to Tokyo for the Shaman Fights, she followed him. She serves as his trainer, and cares for him.

Rina Hidaka is not an original member of the 2001 Shaman King cast. Hidaka was Filo in The Rising of the Shield Hero, Milim in That Time I Got Reincarnated as a Slime, and Hardgore Alice in Magical Girl Raising Project, among other roles.

On the Shaman King website, Hidaka says: ‘I am surprised and honored to be involved in Shaman King, which has been loved for many years. It’s an opportunity to play surrounded by wonderful seniors, so I hope I can learn a lot. Pirika is a hard-working girl with a strong sense of justice. Thank you for your support!’

In the first series, Pirika was played by Tomoko Kawakami, who died in 2011.

It should be noted that the Ainu people are real, not fictional. They are sometimes compared to Native Americans, since they lived in Japan before the arrival of the Yamato (one of the earliest Japanese clans). They are not considered to be ‘Japanese’, but indigenous descendants of the prehistoric Jomon people. Many Ainu live up in Hokkaido, although many are also assimilated into Japanese culture.