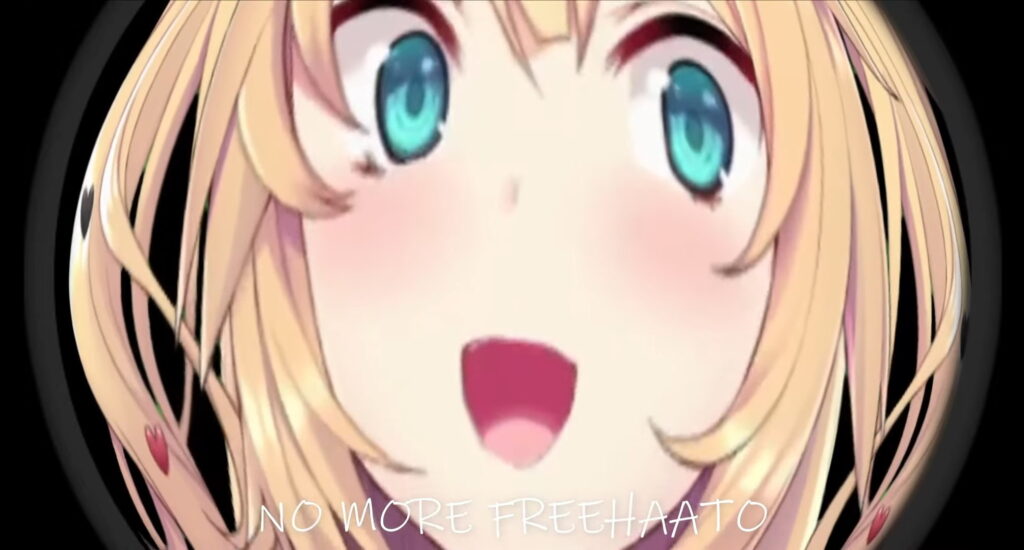 Just when you thought Hololive virtual YouTuber Haachama/Akai Haato couldn’t get any weirder than that time she ate a tarantula, she goes and streams something like #FREEHAACHAMA.

During this hour-long live broadcast, her idol personality ‘Akai Haato’ attempts to sing karaoke songs just like any other VTuber, but is interrupted several times by Haachama. This culminates in a genuinely disturbing segment towards the end where Haachama appears to break into Haato’s department, declares that there will be ‘no more FreeHaato,’ and cuts off her head. This segment has also been handily uploaded as a separate video, ensuring that everyone can keep up to date with the latest lore.

For the uninitiated, this can appear quite bewildering. To be fair, even to regular Hololive viewers, this is incredibly out of the ordinary; no other personality is doing anything quite like this right now, which is why Haachama’s content is so exciting.

To offer a bit of context, Haachama originally debuted under the name ‘Akai Haato’; ‘Haachama’ was just her nickname. Sometime last year, however, she changed most of her social media to the name ‘Haachama’ and began to act as if the two names actually referred to two different personalities: this was always a headcanon in the fan community, but became ‘canon’ when she put out such videos as #FREEHAATO. Much like the previously mentioned livestream, this appeared to suggest that Haachama was somehow holding Haato hostage. Now, it is more or less the main narrative of the entire channel.

Before the momentous #FREEHACHAMA livestream, ‘Akai Haato’ made a return and streamed the game Minecraft two times on the nights of 5 and 6 February. This was what Haachama was apparently mad about in the #FREEHAATO livestream. Furthermore, in the earlier video ‘COEXIST FOREVER,’ it was implied that Akai Haato comes out whenever Haachama sleeps, and vice versa.

Even as I write, more videos are coming out, such as ‘HELP ME,’ which implies once again that Haato is imprisoned by Haachama. This is also part of a longer livestream where Haachama reviews lewd art of herself.

It is quite clear that Haachama, Akai Haato, or whatever she calls herself, is doing something unique and is pushing the boundaries of what a VTuber can be. After all, what’s the point of sticking with one personality when it’s all made up, anyway? Plus, there’s no need to stay family friendly when your audience is full of adult otakus.

The response from fans has also been largely positive, although there are some who have been turned away by the much heavier focus on narrative. For those looking for a little something different from the regular VTuber content, her channel is a must watch.