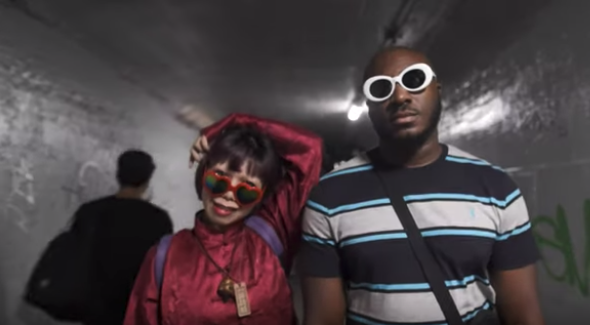 Tokyo label Trekkie Trax has been connecting with artists well beyond Japan since forming in 2012. Aside from all of the great music they’ve released in that span, the label has done a great job in connecting creators from outside their home country with those within the archipelago’s boundaries. The latest collaboration comes via London club maker Roska, who will release via Trekkie Trax this Friday. Ahead of that, he and the label have shared “Pree Me,” a number that finds the producer working with rapper Minami Nakamura. Watch the video — which finds Nakamura just going for it— below.

For the most part, Roska keeps the beat pretty sparse to allow plenty of room for Nakamura to spring around and do lyrical somersaults over. Though it can get skeletal, “Pree Me’s” music uses a good blend of dancehall and baile funk elements to create a lively (albeit slightly unnerving — all that space will do that) track that’s in constant motion.

Which is where Nakamura thrives. The TENG GANG STARR MC can turn odes to the Reiwa era into high-energy affairs, and she’s given a lot of room to stretch out on “Pree Me.” Though you don’t need it to get the full impact of the song, the video accompanying it actually does go a long way to underlining what she brings to a number like this. Despite playing out behind a series of vending machines and in a tunnel, Nakamura commands attention in the clip, jumping around and mugging for the camera in a way that demands eyes on her. Her verses themselves do that too, with little breaks in the flow to deliver lines about spinning kicks and a particularly gleeful “yatta!” The pair work great together, which is just another example of Trekkie Trax’s musical diplomacy in action.