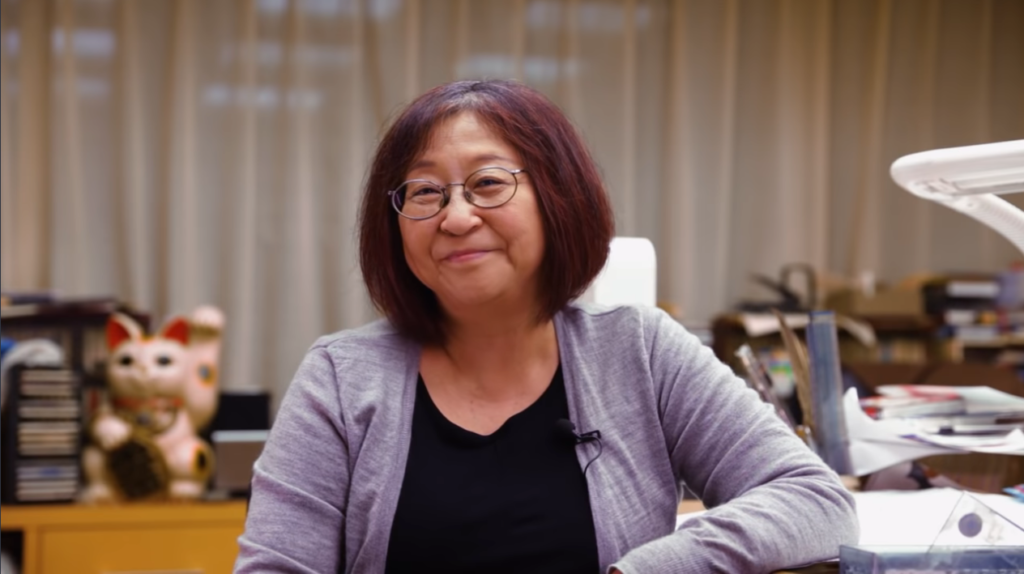 Shogakukan recently shared a long-form interview via the official Weekly Shonen Sunday YouTube channel with the legendary Rumiko Takahashi, creator of Urusei Yatsura, Ranma ½, Inuyasha, and other seminal works. The interview was originally only shown to attendees of last year’s Angoulême International Comics Festival – where Takahashi received the Grand Prix for lifetime achievement – so this comes as quite a surprise. Furthermore, given that the interview is presented in Japanese with French subtitles and is only available to the end of May, some of the key points are outlined here, if only for the sake of posterity.

This Rumiko Takahashi interview starts at the very beginning of her career, asking how she got into manga in the first place. Takahashi responded by saying that she often read the magazines and collected volumes that her two older brothers brought home – giving Akatsuka Fujio, Fujiko Fujio and Osamu Tezuka as examples – as well as recounting her fascination with the kappa illustrations that her father, a medical practitioner, would draw on patients’ prescriptions. All of this cultivated a love of drawing and manga that has never gone away since.

Even so, in the interview, Rumiko Takahashi says that the moment that she decided to become a mangaka was when she bought her first pen around the end of elementary school and the beginning of middle school. Using that, she would copy the illustrations of manga that she liked (especially Osamu Tezuka) and began to cultivate her own style. Then, when she entered university, she began to submit manuscripts to publishers, including Shogakukan. 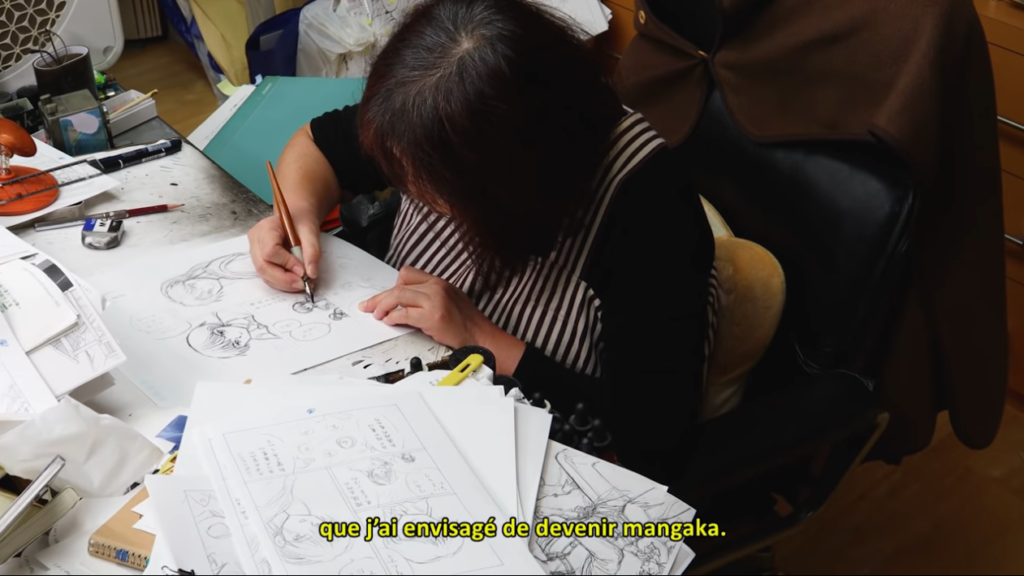 One of those manuscripts ended up making enough of an impression that it became her first series: Urusei Yatsura. She drew the first couple of chapters for the series while still in university, and then used her vacation and days off to contribute to the magazine when she was able. In this sense, the team over at Shogakukan was incredibly understanding, immediately offering her a full-time serialization once she graduated.

Yet, the idea for the series actually first came while Takahashi was under the tutelage of Kazuo Koike, who ran the legendary ‘Gekiga Sonjuku’ program from 1977 to teach up-and-coming artists the basics of manga. Apparently, one of the assignments for this program was to come up with a new idea for a story each week, from which Takahashi “assembled” the idea for Urusei Yatsura. That just goes to show that if you throw enough things at the wall, something is bound to stick. 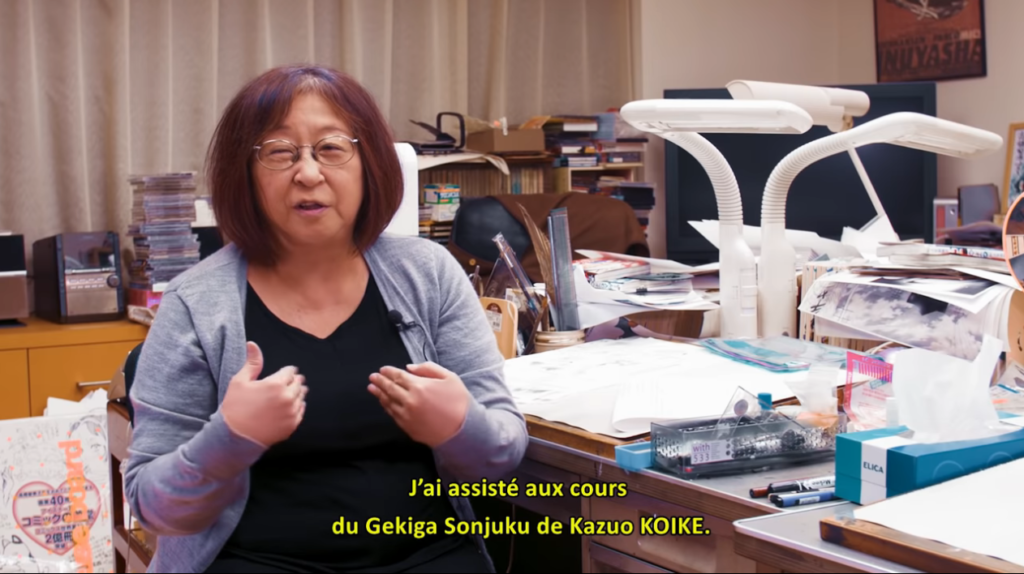 Angoulême then began to walk through the rest of Rumiko Takahashi’s career for the next part of the interview, starting with Maison Ikkoku. This series debuted in 1980 while Urusei Yatsura was still publishing, and this was because one of Takahashi’s old editors had been transferred to help launch the new Weekly Big Comic Spirits magazine. Returning the favor, Takahashi drew inspiration from a real-life building that was behind her lodgings during her student days, but the characters, Takahashi was keen to emphasize, came entirely from her own imagination. Furthermore, despite doing two series at the same time, Takahashi found working on Maison Ikkoku to be quite “relaxing” given that they were very different in tone.

Ranma ½ then began in 1987, a couple of months after the end of Urusei Yatsura. According to Takahashi, this was a series that she had “always wanted to draw,” combining a school setting with martial arts along the lines of a one-shot that Hikaru Yuzuki had drawn some years before. One of the most interesting points in this segment, however, was when the author admitted that she never thinks about her stories’ endings until at least “two, three, maybe six months” before their conclusion. This seems to sum up Takahashi’s early approach, which was to focus on character interaction much more than story.

In this sense, if Ranma ½ was business as usual for Takahashi, then Inuyasha was something completely different. When asked in the interview why she went in such a radically different direction, Rumiko Takahashi said that she had always admired more action-oriented shonen manga since her childhood and would usually point to Dororo as a source of inspiration, but had recently realized that she was probably more influenced by the Japanese epic novel Hakkenden, published in many parts during the Edo period. Drawing also on the standards set by Shigeru Mizuki and his GeGeGe no Kitaro, she set out to create a story more based around “adventure” than anything else she had created up until that point. 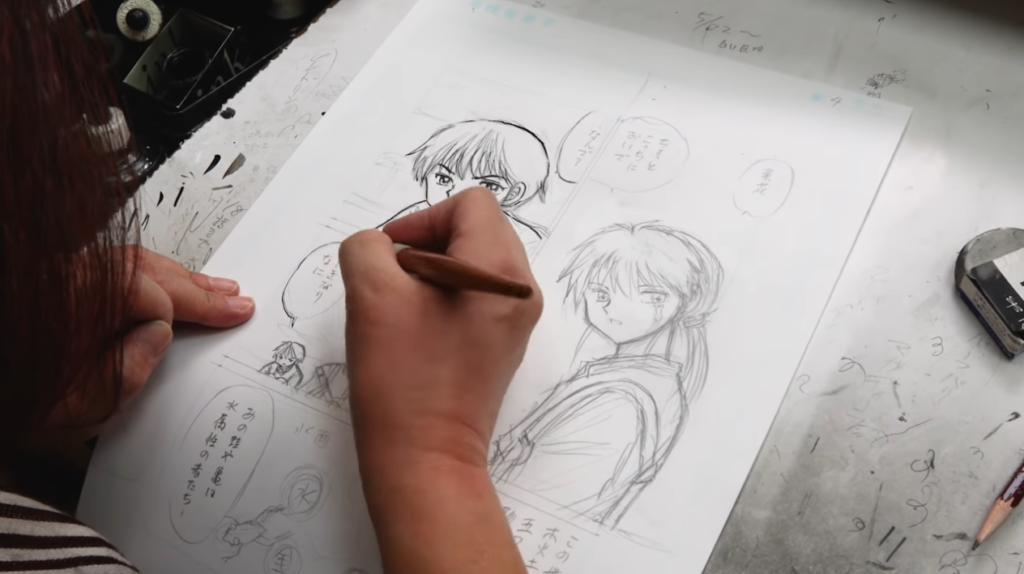 Takahashi admits that her next work, Kyoukai no Rinne, was a definite return to a lighter tone. But demons and yokai would make a return in MAO, Takahashi’s latest work. With regard to her latest series, Takahashi remarked that she is having a lot of fun with the different aesthetics that come with the different time periods that appear in the story, as well as focusing much more upon mystery. Much like her approach to endings, she says that she never knows what the answers to any of the mysteries that are posed in the narrative, meaning that she has just as much fun finding out what they are as the reader.

All in all, Angoulême’s Rumiko Takahashi interview provides a detailed recounting of nearly all aspects of Takahashi’s long career straight from the horse’s mouth. Although I have listed some of the most interesting points here, there is still so much more that I had to leave out. If you’re curious and can speak either French or Japanese, then you can check the interview out on Weekly Shonen Sunday’s official YouTube channel until May 27.