If you’re a fan of comic book, anime, or video game merch, then you probably love S.H. Figuarts. They may not be the cheapest models on the market, but their accuracy, posability, and collectability is absolutely unmatched.

They’ve released so many figurines that it’s impossible to go into detail about them all. But here we’re going to take a look at some of the most popular or impressive S.H. Figuarts lines and models to appreciate the breadth of what this company has done.

Specifically designed for anime and other geek-culture adult fans, S.H. Figuarts debuted in 2008 with show-accurate detailing on all of their figures, high-quality production, and the steeper price point to go with it.

Part of the umbrella group of Bandai figurine subsidiaries called Tamashii Nations, they have lines of toys from tons of anime series, along with Marvel comics, Star Wars and more. They also have a few spinoffs, including S.H. MonsterArts for figures of Kaiju such as Godzilla, D-Arts based on video games, and Figuarts ZERO for non-posable models.

With over 75 figurines, S.H. Figuarts has done a ton of work in the Dragon Ball fandom, including DragonBall Z (or DBZ) and Dragon Ball Super. The ten-year anniversary of the DBZ line just passed at the end of 2019, and they have shown no sign of stopping. There are another ten DBZ models alone scheduled to come out over the next year.

Due to the popularity of DBZ, not only does S.H. Figuarts create collectibles for each character, but they also create one for each look that each character has from the TV series through all the spinoff films. Outfit changes, hair changes, or any other alteration means a whole new toy for S.H. Figuarts to release.

In a similar vein, one of the most popular figurines S.H. Figuarts makes is Broly, one of the characters from DragonBall Z. The most recent version of him came out at San Diego Comic Con in 2018, but there have been several different models to represent his looks from across the TV series and movies.

Like many of the other S.H. Figuarts collectibles, Broly’s packaging comes with a few accessories; different faces you can swap out for different expressions, and different hand positions you can switch between.

The main event, though, is Broly himself and his insanely huge muscles. Although bits of his look change with each version of Broly that S.H. Figuarts releases, they stick with a similar body and level of detail in his muscles across the board, so you’re never confused about which character you’re dealing with. 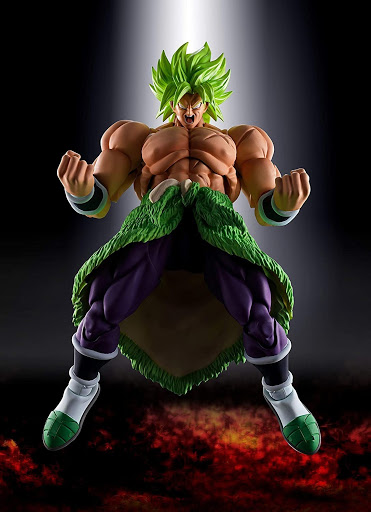 Another recent release from S.H. Figuarts in the DBZ line is Gogeta. Released just over a year ago, he has the accessories of varying facial expressions and hand positions like any other model. He also comes with two separate head looks – standard, and bright blue.

However, he was not released with a Super Saiyan look, nor did he have any energy ball effect accessories, which disappointed some toy reviewers. But overall, they still agreed that they were pleased with the release and told fans that it was worth the purchase.

From the movie made to commemorate twenty years of Kamen Rider, S.H. Figuarts released a model of the titular main character, Kamen Rider ZO.

The particularly interesting thing about this figurine is its attention to detail in texture. Of course, it comes with swappable heads and hands, but it also has a little S.H. Figuarts grasshopper to tie into the fact that the character has grasshopper DNA.

Additionally, S.H. Figuarts put a layer of clear material on the model to keep the look the same but give the Kamen Rider ZO figurine the same texture the real character is supposed to have in the film.

Although S.H. Figuarts is most famous for its anime collectables, there are some Western franchises, like Marvel, that have a global impact. This has led S.H. Figuarts to release two figurines of Thanos – one in his outfit in Avengers: Endgame, and, more recently, one showing how he looks in Avengers: Infinity War.

Both Thanos models also stand out, so to speak, because, by S.H. Figuarts standards, they’re massive! Standing at about 195mm, they showcase Thanos’s power by towering over any other character. For reference, the Captain America figurine is about 150mm tall.

S.H. Figuarts is a name that is basically synonymous with quality. Their attention to detail is unparalleled. And while it does cost more than the average model, adult fans everywhere have made it clear that what you get for the cost is very much worth it.