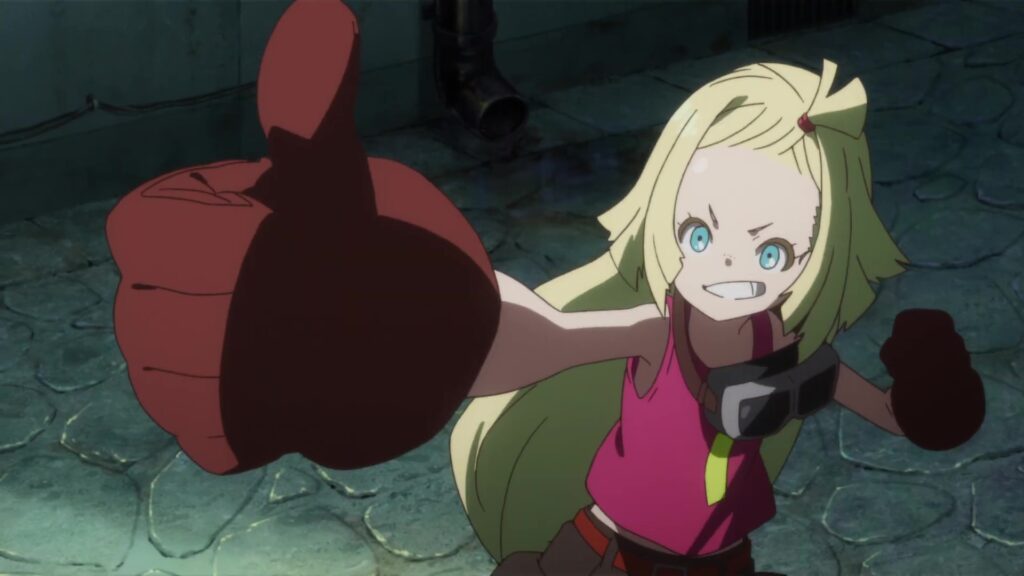 The PV for Project ANIMA’s Sacks&Guns!! (Sakugan!!) premiered earlier this week, and it truly was something special. Despite being only a short minute long, it packed quite the wallop, showcasing tense mecha action, fierce kaiju, and an adorable father-daughter dynamic between its two main characters, Gagumber and Memempu.

Despite its dark colors, there was something robust and upbeat within its presentation, and at times seemed like something Trigger would do. Reading the light novel’s plot synopsis about humanity being pushed into the underground world of the Labyrinth immediately brings Gurren Lagann’s underground villages to mind. As a diehard fan of Gurren Lagann and everything Imaishi, this puts a big grin on my face.

Now, the trailer’s visuals alone are enough to convince me that Sacks&Guns!! will make quite a splash in the mecha anime scene. But of course, there’s more to the story. Sacks&Guns!! will be the first series commissioned by Project ANIMA, an ambitious collaboration project formed in 2017 between DeNa, Nippon Cultural Broadcasting, and Sotsu Co. Ltd. We’ve also got Studio Satelight producing it with some of their most well-known names at the forefront, all of them presented in the trailer with huge fonts in the most ‘look at me, look at me’ way possible.

Serving as the main director is Junichi Wada, who previously directed episodes of Log Horizon and Fairy Tail. We’ve also got Dimension W mangaka Yuji Iwahara doing character designs, Stanislas Brunet of Macross Delta and Carole & Tuesday fame doing the mech designs, Kazumi Koda from NieR: Automata doing concept design, Beriko Kimura from Tiger and Bunny doing sound direction, and the famous Masaaki Endoh doing the OP, which he claims to have written as if it were his own theme song. Not enough for you? Okay. How about the Macross OG himself Shoji Kawamori doing the kaiju designs? Truly, this is a show that demands your attention. But it’s not just big stars that make up the cast of Sacks&Guns!!. The newcomer Kanon Amane will voice the adorable Memempu, making it her first major role after making tiny appearances in Digimon Adventure and Gundam Build Divers Re:RISE. Fun fact: she won the role back in December 2019, when she beat over 1,400 applicants, 300 of which were already seasoned professionals. This is made even more impressive when you consider that the criteria was based on who gave the most natural performance. And who am I to disagree when you got veteran seiyuu like Hiroki Touchi and Toshiyuki Toyonaga at her side? You’ve probably already noticed this, but I’m very enthusiastic about Sacks&Guns!!, and the most excited I’ve been for a mecha anime since 2018’s Planet With. I also really like how Project ANIMA is putting so much time and effort into an anime whose original light novel was the first (and so far only) work of an amateur writer by the name of Nekotaro Inui. The light novel itself, Sakugan Labyrinth Marker, won Project ANIMA’s 2018 contest in the Science Fiction/Robot Anime category, indicating the strong impression it left on its judges. Project ANIMA also wants to make decade-defining anime that showcases a whole new generation of writers and artists, and it shows with their decision to adapt Sakugan Labyrinth Marker. The people at Project ANIMA clearly have lofty ambitions, and they seem determined to see them met.

So what else can I say other than… Sacks&Guns!!? More like, SACKS OF FUN! (Okay, I’ll stop here.)