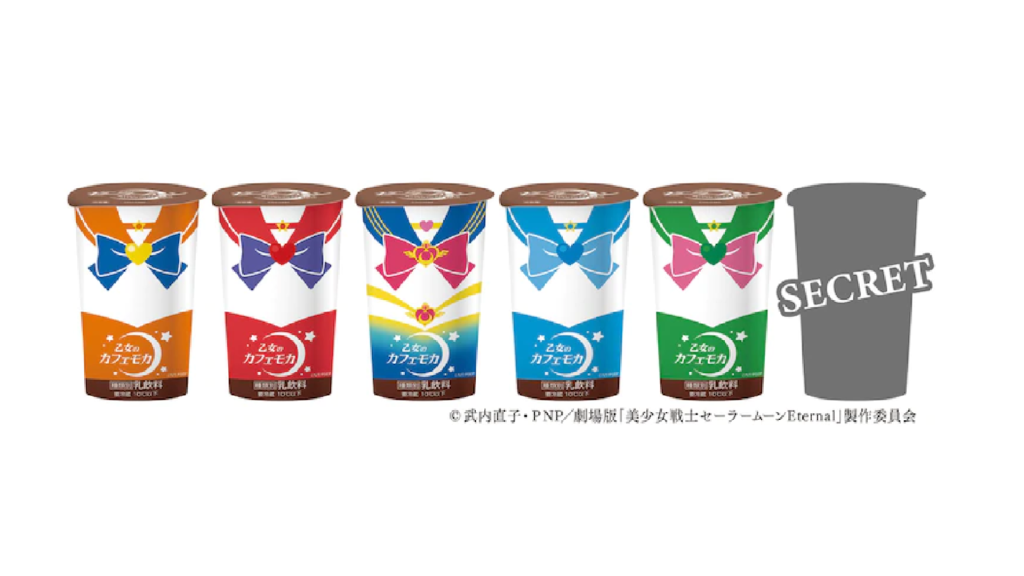 After an understandable Covid-19 based delay, the first of the two Sailor Moon Eternal films is finally beginning to creep up on us. With a January 8, 2021, opening date, the same as the upcoming Gintama The Final film which might be some competition, we’re going to being to see more advertising, merch, and cross-over promotion hit Japan. The first of this wave of products come in the form of themed Sailor Moon cafe mochas from the Lawson convenience store chain coming in a different variety for each of the lead scouts.

These Sailor Moon cafe mocha varieties are now available at Lawsons across Japan and will be until August 24. As you can see you have 5 reveals cups based on Sailor Moon herself, Mars, Venus, Mercury, and Jupiter as well as one secret variant! Perhaps its a Chibi-Usa cup as she’s prominently featured in the Sailor Moon: Eternal saga. We’re not sure if these cafe mochas actually differ in flavor at all or just have different collectible cups. In addition to the coffees, a variety of knick-knacks and lottery goods will be available at Lawsons and these will last until the fall or when supplies run out.

You know what Sailor Moon is and why its popularity has lasted for nearly three decades. You know why even now people find Usagi and her time of galactic warriors inspiring and charming, and why we’re excited about the Sailor Moon Eternal Films. In fact, it’s not too unreasonable we think to go out and by a Sailor Moon Cafe Mocha and drink it like it’s a normal unbranded cafe mocha. Everyone who sees the cup will think ‘Ah Sailor Moon, how Nostalgic. We totally get it!’ Convenience store coffee tends to be much cheaper than your Starbucks alternative so its a win-win all around.

These Sailor Moon Cafe Mochas will be coming to Lawson from now until August 24.