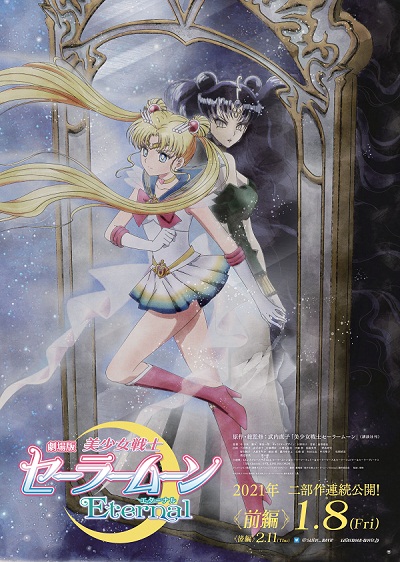 Nehelenia appears to be glaring at Sailor Moon from within her mirror.  As always, Sailor Moon looks determined to defeat evil for great justice. Appropriately, Sailor Moon’s side of the picture is also noticeably lighter and brighter than Nehelenia’s literal dark side. Even if you knew nothing about Sailor Moon, there’s no question that these two are archenemies.

But perhaps even more interesting than the new visual itself is the message on Toei’s PR website. Toei wants us to know that ‘the darkness of the new moon’ overflows at night. Apparently, the Sailor Moon Eternal movie website will change at 10 p.m. (Japan Time) each evening.

‘Please see for yourself what will happen,’ the message adds, which, put together with the overflowing darkness, sounds pretty ominous for just a movie press release.

Fans of Sailor Moon should recognize a lot of the symbolism involved here: Nehelenia is queen of the Dark Moon, sometimes translated as the Dead Moon, or simply the new moon. Mirrors play an important role in Nehelenia’s back story: Queen Serenity sealed her in a mirror long before Sailor Moon came around. Despite being imprisoned inside the mirror, Nehelenia is still able to control things on the outside.

The new film will come out in two parts. The first part will be released on 8 January 2021. Part 2 will arrive on 11 February.