Sailor Moon Prism On Ice: Everything You Need to Know About the New Sailor Moon Ice Show 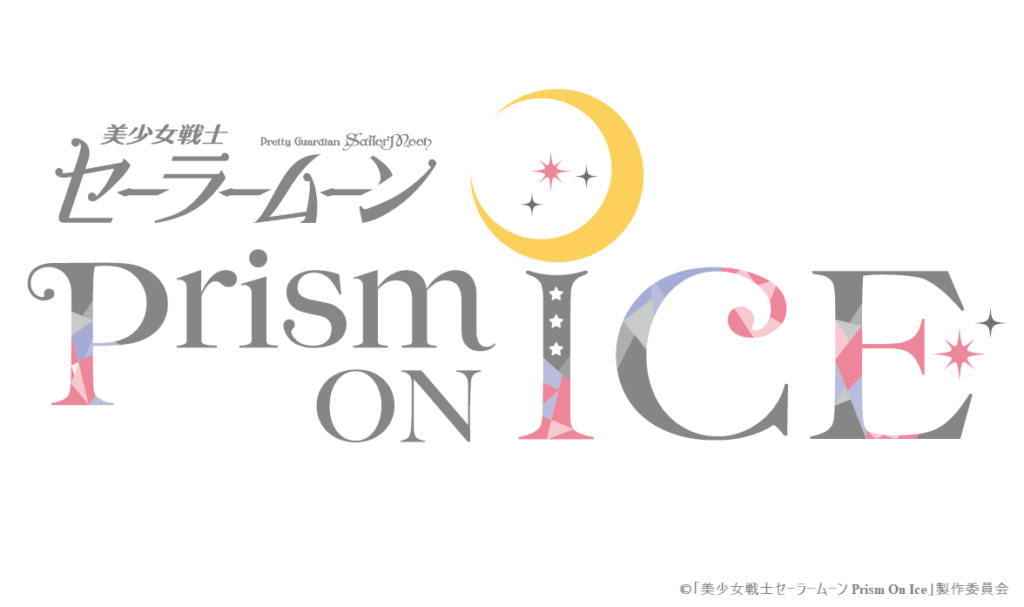 This is NOT a drill. The world is getting an official Sailor Moon themed ice show complete with world record-breaking Olympic figure skaters, the return of the voice actors from Sailor Moon Crystal and some of the best stage costumes and wigs I have ever seen. After being given everything a Sailor Moon/Figure Skating/Anime/Rhinestone fan could possibly ask for, how could anyone know where to begin? Well, that’s why I’m here. Here’s a breakdown of everything you need to know about  Sailor Moon Prism On Ice.

Of course, any show about Sailor Moon has to feature the 5 core characters that make up the Sailor Senshi (or Sailor Scouts). The team putting this show together definitely made sure to gather the most perfect talent & personalities to fill the roles of these iconic characters.

Medvedeva is a two-time world champion, two-time Olympic silver medalist and self-described otaku. Any self-respecting anime fan should be overjoyed just to watch her skate around in the first place, as she frequently incorporates traits of her dedicated fangirling over her favorite titles into her routines and off-ice rituals. But now, we get the honor of watching her star in the show as the title character, Sailor Moon (Usagi Tsukino). Evgenia revealed this in an Instagram post, complete with a perfect wig!

Evgenia has definitely made her case and made her mark on the figure skating world as the most avid Sailor Moon fan there is. In a skating exhibition, she donned a Sailor Moon costume, complete with props and on ice transformation sequence. She’s also been known to carry a Luna toy with her whenever she finishes a skating routine and waits for her score in the “Kiss and Cry”.

Evgenia’s passion for Japanese animation hasn’t been limited to just Sailor Moon though. She made her online debut as an anime lover by live-tweeting several episodes of the (airing at the time) series Yuri!!! On Ice. She even went as far as to cosplay one of the main characters during her Twitter storm.

This isn’t the first time she’s been recruited by a Japanese company to star in an anime related campaign either. She also wore a Homura Akemi inspired figure skating outfit for an ad campaign. The commercial was for the mobile game Magia Record: Puella Magi Madoka Magica Gaiden and she starred along-side her training partner Alina Zagitova.

Mirai Nagasu will be portraying Sailor Mars (Rei Hino). Mirai is an amazing choice for this role, if not for her career history-making story alone.

After a rocky four years, Mirai showed up to the 2014 U.S. Figure Skating Championship as an underdog. She pulled through and got third place overall, (a bronze medal) but an extremely controversial decision was made. The selection committee (against their usual protocol) left Nagasu off the Olympic team and sent fourth-place finisher Ashley Wagner to the 2014 Sochi Olympics instead. Crushed, Mirai publicly swore not to give up hopes of being accepted on the 2018 team.

During the 2014-2018 season, Mirai relocated to Colorado and trained hard. In 2017, she perfected the triple axel jump. This jump has only been completed in a competition by less than ten women in history as of 2018 and had never been done successfully at the Olympics by a U.S. woman (so far). She got second at the 2018 U.S. National Figure Skating Championship and was chosen for the Olympic team. She then made history with a completed triple axel jump as well as a bronze team medal.

Not only does Mirai have impressive skating qualifications, but she also has a track record of being an anime fan as well. She’s shown off on her social media that she built a Gundam kit in her spare time, and she made her love of anime official in 2018 when she tweeted “I’m into anime now.” She also asked her followers for anime recommendations and frequently posts about her love for Fullmetal Alchemist.

Satoko Miyahara will be skating in the role of Sailor Mercury (Ami Mizuno). This is a superb casting choice, and I can’t think of another skater who personifies Sailor Mercury as well as she does.

Miyahara is a Japanese figure skater. She is a two-time world medalist, two-time Grand Prix Final medalist, the 2016 Four Continents champion and a four-time national champion. She got fourth place overall at the 2018 Pyeongchang Winter Olympics.

Miyahara has many similarities to Sailor Mercury. She’s been described by competitors and competitors as “always the most prepared”, “poised”, “elegant” and “skates like she’s hiding a secret.”

Sailor Mercury and Satoko both have parents who are doctors. Ami’s mother in the series was a doctor, whereas both of Satoko’s parents are doctors. Satoko learned English in the United States because her parents lived there briefly for work.

Both share the trait of being studious as well. Ami Mizuno is book-smart and a top student with excellent grades. She is portrayed as putting studying as a priority in her life. Satoko Miyahara also has an incredible track record with academics. Even though Satoko is a dedicated skater, she graduated from Kansai University High School in 2016. In addition to her skating dreams, she has declared that she will be attending Kansai University with a major in literature.

The two are also similar in height as well. Miyahara has earned the fan nickname “Tiny Queen” overseas because of her short stature of 5’0″. Sailor Mercury is one of the shortest Sailor Soldiers, barely taller than Satoko at 5’2″.

Alissa Czisny will be playing the role of Sailor Jupiter (Makoto Kino). Alissa is an American figure skater and has held the titles of 2010 Grand Prix Final champion, and the U.S. Figure Skating champion in 2009 and 2011.

Czisny is the tallest of the group, standing at 5’4. This is perfect for Sailor Jupiter, as dealing with her height of 5’6 has been a major character trait for her development in the series. Czisny is a powerful athletic jumper with beautiful elegant spins, which is also a great parallel to Sailor Jupiter. Sailor Jupiter’s personality is a juxtaposition of her boyish brute strength combined with her feminine interests and gentleness.

Since 2014, Bereswill has been playing the character of Elsa in Disney On Ice’s rendition of Frozen.

Becky’s on and off ice experiences make her the ideal Sailor Venus. Sailor Venus has a flare for the dramatics and performing, so Bereswill’s years of being an ice stage performer definitely come in handy. Sailor Venus is also the (sometimes self-proclaimed) Soldier of Love and Justice. Becky got married not too long ago, which is a great way to show you’re devoted to living a life dedicated to love!

In addition to the esteemed professional skaters listed above, a supporting cast of international talents will also be appearing in the show.

Andrew Poje will appear in the show as Tuxedo Mask (Mamoru Chiba). He is a Canadian figure skater who has amassed quite the track record throughout his career winning the Four Continents Figure Skating Championships twice, as well as a number of medals in both the world and Canadian national championships.

Takahito Mura will be playing the villainous Jaedite. He is a Japanese national born in Chiba. In his figure skating career, he has won the Four Continents Figure Skating Championships and Canada Skate International in 2014, on top of being a 5 time Japan Championships bronze medalist.

Seiya Hashimoto will appear in the show playing Zoisite alongside his fellow Japanese national Takahito Mura.

Dylan Moscovitch will be skating as another of the Four Heavenly Kings (Shitennou; 四天王), Nephrite. He is a retired Canadian competitive pairs skater who has placed multiple times at the Four Continents Figure Skating Championships, as well as a 2014 Olympic Team Silver Medalist. While it’s not specifically anime, his 2004-2005 singles skating program featured a short routine for famed Japanese guitarist Tomoyasu Hotei’s internationally recognized song “Battle Without Honor or Humanity”.

Jason Brown is rounding out the cast of villains appearing as Kunzite. Jason is an American skater who has also achieved many accolades in his career including becoming one of the youngest male figure skating medalists taking home a Bronze Medal in the team event at the 2014 Sochi Winter Olympics.

ANZA (Anza Ohyama) will be portraying Queen Serenity in a non-skating role. She is a Japanese singer and actress who has had works featured in a variety of anime & games over the years including Cardcaptor Sakura. Fans of Sera Myu will recognize her from her role as Sailor Moon in 13 separate productions of the stage show starting in 1993. In 1994 she participated as a member of Moon Lips, who performed the iconic song “Moonlight Densetsu” to be used as the theme in the Sailor Moon S and Sailor Moon Super S anime. Her stage acting career spans many years and includes roles in the Japanese productions of iconic musicals such as Les Miserables and Miss Saigon. 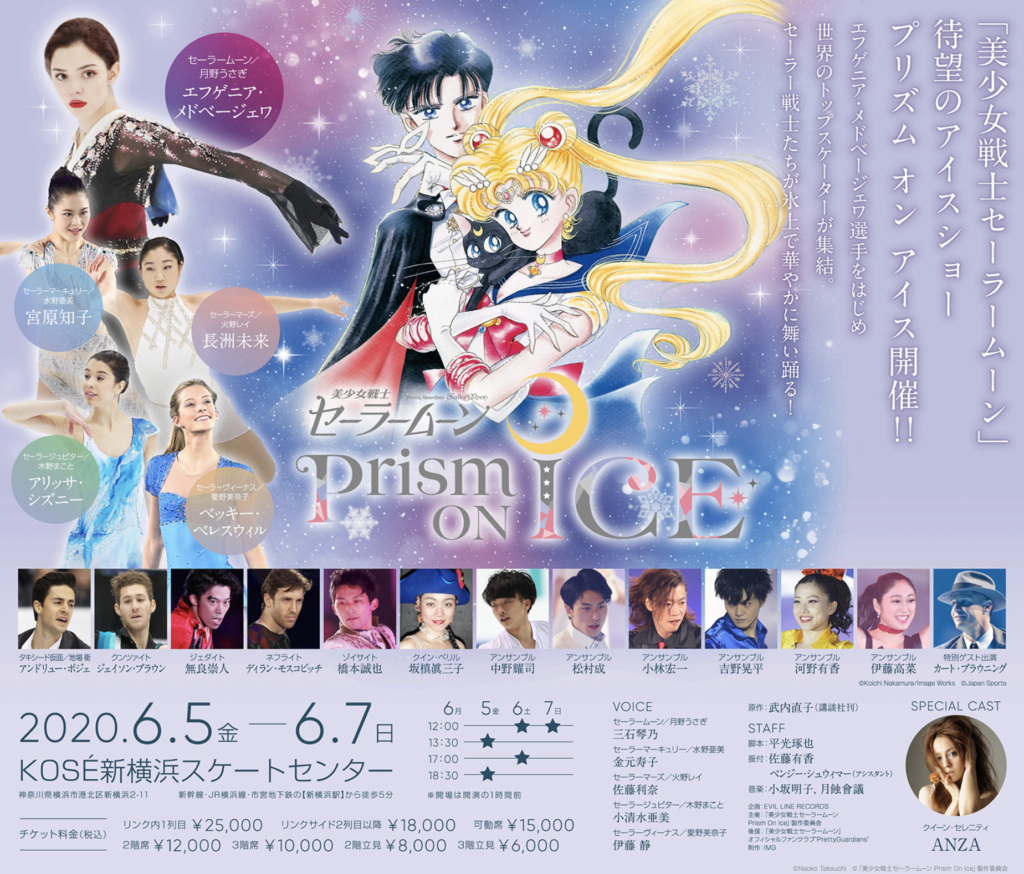 The show itself is already shaping up to be a masterpiece. The script for the performance will be written by Takuya Hiramitsu. Hiramitsu has worked on the Sailor Moon franchise before, working on more than a dozen of the Sera Myu (Sailor Moon Stage Musical) scripts since 1994. We don’t have any details on the plot yet, but given the cast it’s pretty clear to see that the story will be based on the very first arc of the series, although there is no mention of Queen Beryl anywhere as of yet.

The ice show extravaganza will be held a total of five times. These performances will take place between June 5th and June 7th at the Kose Shin Yokohama Skate Center, located about 1 hour south of Shinjuku Station by train. If you want to buy tickets, they go on sale to the general public on March 16th through Japanese convenience store chain Lawson’s ticketing service!