Should ‘Sailor Moon’ Really Be Used to Promote Slimming Products? 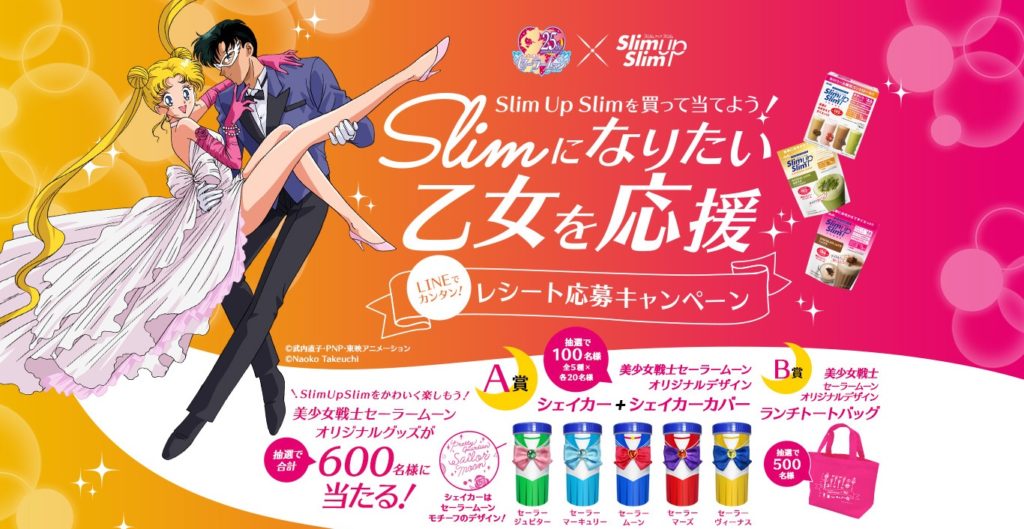 Sailor Moon has been inspiring women around the world for over 25 years now. Originally launched as a manga in 1992 by Naoko Takeuchi, the series has gone on to inspire multiple anime series that have seen a particularly large impact in the west. There is an uncountable number of young women that have watched the show and been inspired by the Sailor Senshi’s courage and tenacity as female role models. Given this, should Sailor Moon really be used to promote slimming products?

A new collaboration featuring characters from Sailor Moon in tandem with the Asahi company’s ‘Slim Up Slim’ line of slimming products launched on April 11. Buying participating meal replacement drink products, and then sending a photo of your proof of purchase to the collaboration’s official LINE account will net you the chance to win one of 500 lunchbox-sized tote bags, or one of 600 shakers based on five of the Sailor Senshi’s costume designs. These designs include ones based on Sailor Moon, Mercury, Mars, Jupiter, and Venus, and can be seen at the bottom of the image below:

Those looking to get one of the prizes on offer can enter as many times as they want, encouraging particularly passionate fans (who will most likely be women, but perhaps some men will participate as well) to buy a whole load of these Slim Up Slim meal replacement drinks to raise their chances of victory.

While the campaign predicates itself on “supporting” those who want to lose weight by utilizing the iconic and inspirational characters of Sailor Moon, something about this whole collaboration doesn’t sit quite right with me. Of course, aiming to lose weight to improve your overall health is a great thing. But simply replacing meals often isn’t the best way to do it – in fact, skipping meals or dramatically lowering calorie intake can be bad for your overall health in the long run.

In speaking to female western fans of Sailor Moon, I have often found that the appeal of the Sailor Senshi as role models is in how they promote independence and individual happiness above all else. Yet the prominent inclusion of Sailor Moon’s stick-thin figure as the key visual of the entire project seems to be positioning her as the ideal body image – something which seems to go against the entire idea of Sailor Moon in the first place, as well as being an unhealthy ideal to aspire to.

I’ll admit that, as a man, I might only be able to offer a limited analysis of this whole issue. So I’d love to hear what female fans think of this new collaboration in particular, either via social media or our Discord server below.