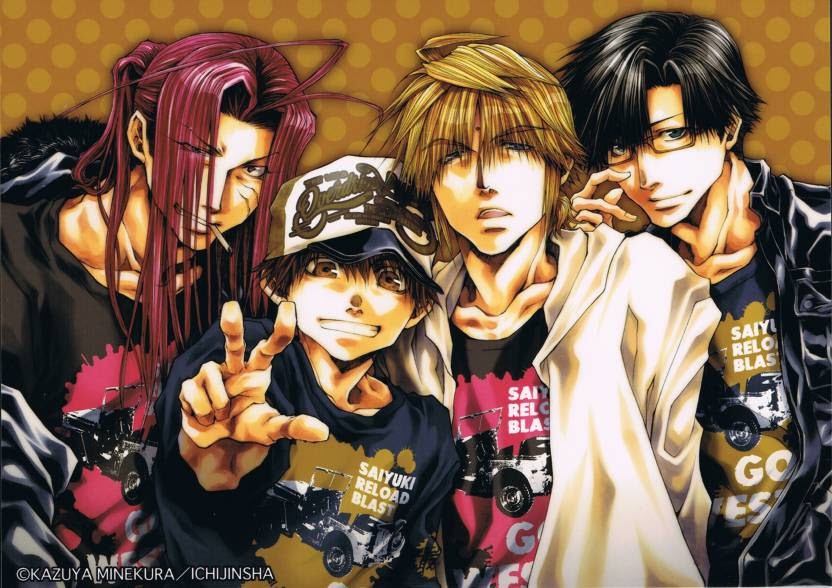 Saiyuki completely changed my relationship with anime. That’s a hefty claim, I’m sure, considering the number of people I’ve met who have written the series off, or seen it as pure fanservice (have you seen the handsome main characters?)

Back in 2002, the year I started middle school and also the year I traveled to Japan for the first time, I discovered this series by pure luck, wandering down the manga aisle in Waldenbooks. Again, I point you to the character design. Perfection.

Prior to this, the majority of anime I had seen was shallow. I was young, so series like Pokemon, Digimon, all those -mons that were big in the early 2000s, those were where my obsession with anime began and ended.

Saiyuki showed up and blew the top off of what was possible with these animated stories, with a level of character depth and backstory that 11-year old me didn’t know how to handle. It offered so much more in terms of storytelling and character development and threw me into anime fandom full-time.

The story of Saiyuki dates back to 16th century China, to a novel titled “Journey to the West,” named one of the four great classical Chinese stories ever written. While the anime and manga adaptation of this tale makes plenty of updates and changes to the original (including the white horse from the text now being a shapeshifting jeep-dragon), the foundation is kept intact.

In it’s simplest terms, Saiyuki is the story of four characters traveling from China to India and fighting demons, both of the literal and figurative sort. It’s that perfect blend of fantasy, action, drama, and comedy that has kept me coming back for the past eighteen years, and directly after writing this piece, I will be watching it again. No shame.

Who are the Main Characters of the Saiyuki Universe?

Saiyuki has a full cast of characters, and none of them ever feel like filler or fodder, even the supporting cast. Meeting each and every one of them is a treat, but getting to know the four main men is the key to falling head over heels in love with the series. Their pasts are painful and their stories are deep, and much of the series falls to overcoming that pain in times of war and hardship.

As you’ll find, they are much more than pretty faces–and while they keep some key features of their Chinese counterparts, they bring a little more…pizazz. (See the image when you clicked on the article? Don’t think you’d see any of that fashion in 1592.)

Genjo Sanzo – A chain-smoking and clinically depressed Buddhist priest, Sanzo is told to travel to India in order to stop the resurrection of a demon lord. He has some history with the other three members of the party, and brings them along for the ride–very much against his will. Packing a Smith & Wesson and a powerful sutra, his favorite things are silence and beer. In the original “Journey to the West,” Sanzo was much more devout, and likely less prone to swearing.

Son Goku – No, not the one you’re thinking. Based on the monkey character from the legend, Goku is fun-loving and constantly hungry, with a fondness for Sanzo. He fights well with a staff and is a bit of an amnesiac. (Being imprisoned on a mountain for 500 years will make anyone forget the days.)

Beneath that happy exterior is an unspeakably powerful demon, stifled by the limiting diadem he wears on his head, taken directly from the original story. He loves eating two dozen meat buns in one sitting.

Sha Gojyo – The token ladykiller of the gang, Gojyo is half-demon and half-human. The polar opposite of the character on which he’s based, he’s lewd, crude and unapologetically flirty. Fighting with a sickle-flail and making plenty of quips while doing it, he’s constantly at odds with Sanzo when he’s not picking on Goku for fun. He loves ladies, gambling and dirty jokes.

Cho Hakkai – The most responsible and level-headed of the four, Hakkai represents the pig character, though you’d never know by looking at him. Often taking care of the others by buying supplies, cooking meals and cleaning up, he also looks after their wellbeing by acting as a healer. He can use energy manipulation to fight when needed and is closest to Gojyo, who knows much of his dark past. He enjoys driving and hot tea in place of alcohol.

Twenty-Three years of Saiyuki: Where to Start

When looking to begin the Saiyuki series, figuring out where to begin is a serious pain. The manga began serialization back in 1997 in the popular manga magazine Monthly GFantasy, and would continue until early 2002. These were released later in nine volumes and were released in North America by Tokyopop. It was during this period that a two-episode Saiyuki OVA was released, though this was overshadowed by the first full-length anime series.

Gensomaden Saiyuki, which ran for 50 episodes from 2000 to 2001, found incredible popularity upon release and is the starting point for many fans of the series. Created by Studio Pierrot of YuYu Hakusho fame, it amassed swarms of fans, and priest Genjo Sanzo–to no one’s surprise–won best Male Character for an anime at the Animage Grand Prix in 2000. The show itself also won the best anime of the year at the same show.

As if this wasn’t enough, the Saiyuki Reload Gunlock anime premiered in 2004 and ran for another 26 episodes total. It also left fans simultaneously excited and confused, as it continuously deviated from the Saiyuki Reload manga, only to return to the story back and forth throughout its run.

After a lengthy 13-year hiatus, the next installment of the main Saiyuki anime series returned in 2017, titled Saiyuki Reload Blast. It ran for a comparatively brief 12 episodes, and the manga of the same name is ongoing. It resumed from an 18-month hiatus in 2019 as the creator, Kazuya Minekura, recovered from health issues. For now, chapters are on and off, but there is hope that we will eventually see how the story ends.

Is that all? Hardly. Saiyuki Gaiden, a 4-volume manga series and brief 3-episode OVA, tells the story of our heroes 500 years before the start of the original Gensomaden Saiyuki. A film, Saiyuki: Requiem hit Japanese theaters in 2001, and was released by ADV Films stateside in 2005.

There have also been a handful of stage musicals, and two video game releases as well, based on Saiyuki Reload and Saiyuki Reload Gunlock, both released for the PS2. Sadly, these didn’t make the journey west.

Saiyuki is a commitment, but certainly not as daunting as some other long-running anime series out there. While I’d happily dust off my old DVD box-sets and loan them out as needed, a few streaming services are currently offering access to this diamond in the rough.

For the original Gensomaden Saiyuki series, Hulu is streaming the dubbed version. Even for purists who prefer to hear the original audio, the dub is something special, with the localization team working plenty of surprising jokes and quips into the final product. Even watching it now, nearly twenty years after the western release, I’m surprised by how hilarious it can be.

Sadly, Saiyuki Reload and Saiyuki Reload Gunlock aren’t as easy to find online, unless you’re out to purchase physical media. For those interested to see how the art and story progress from the original anime, however, Crunchyroll is streaming Saiyuki Reload Blast, which crams so much excitement into twelve episodes you’ll be gasping for breath.

The original manga can fill in plenty of blanks, and if the Reload and Reload Gunlock anime prove too elusive to find, it’s an easy way to catch up on what you miss on screen.
So what can be said? The characters bring enough sass and angst to make anyone want to root for them, the music can be downright ridiculous western-fare at times and upbeat Japanese punk at others, and there is plenty of content to last for months. While the journey to the west remains ongoing, my feet aren’t tired after nearly twenty years of wandering.