Samurai 8: The Tale of Hachimaru Debuts! Here’s Our First Impressions of The New Manga By The Creator of Naruto

It’s out! It’s finally out! The first manga Naruto creator Masashi Kishimoto is making after finishing Naruto is out. Not counting The Seventh Hokage and the Scarlet Spring side story volume of Naruto, Samurai 8: The Tale of Hachimaru is the first all-new manga Kishimoto has penned since finishing his ninja story. A couple of us have been pretty excited about this release. Debuting in Japan with the May 13 issue of Weekly Shonen Jump and in English on the Shonen Jump app courtesy of Viz Media the same day, there’s only chapter out so far. However, the first chapter of this highly anticipated comes in at a whopping 72 pages which is enough to share a thought or two about. 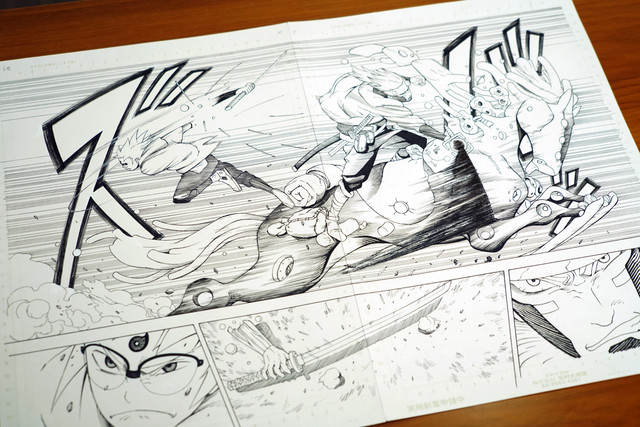 One must keep in mind Masashi Kishimoto is only writing Samurai 8: The Tale of Hachimaru. His longtime assistant Akira Okubo is actually the one laying ink to paper. On that end, the comic does look pretty good. The character designs are clearly Naruto influenced but you can tell they were drawn by a different artists, which isn’t a slight against Okubo in the least. His slightly more cartoonish character designs have their own charm. What looks more like Naruto’s signature art are the setting and backgrounds; Okubo probably did a lot of background filling previously (things like buildings, cliffs, and so on) and so the world of Samurai 8 is reminiscent of Konoha.

Samurai 8: The Tale of Hachimaru is actually a sci-fi story, not that you would know it from the name. Like Naruto, the comic is a celebration of traditional Japanese culture but with a heavy mechanical twist. While Akira Okubo depicts this new world and its inhabitants, they do spawn from Masashi Kishimoto’s creative process. Characters with complex cyborg bodies and a young boy who could only live hooked up to a giant machine, Kishimoto is eager to incorporate elements he couldn’t in his last manga. The world building begins with issue one too and thankfully there’s no ridiculous Shonen Manga jargon so far. That said, it is hard to critique writing or plot solely from an introductory chapter, so we’ll leave that to your personal taste.

Samurai 8: The Tale of Hachimaru will release week to week on the Shonen Jump app in English.

Boruto: What Is It And Where Should You Start?

Is Samurai 8 A Worthy Follow Up Manga To Naruto?

Undead Unluck Chapter 1: Not Dead on Arrival – Your Manga Week #14