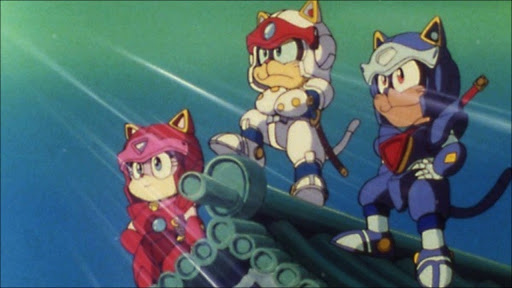 Samurai Pizza Cats is an American adaptation of a Japanese animated series. Much like pizza itself, the anime was adjusted and changed to meet American tastes when it was delivered.

The result is a funny, goofy, and pun-filled show about cat samurai who deliver pizza and fight against evil.

Samurai Pizza Cats started out as an anime, Kyatto Ninden Teyandee (1990-1991). In the original Japanese, the cats are ninja, not samurai.

Surprisingly, there is no manga version of Samurai Pizza Cats.

Generally speaking, anime shows often tend to originate with manga, a light novel or some other format. Samurai Pizza Cats is a rare exception where the TV version is the original version.

Even in cases where the anime comes first, there is often a manga which came afterward.  For example, Tenchi Muyo! got its start with an Original Video Animation. A manga based on the OVA came out two years later.

With Samurai Pizza Cats, you might find a fan-made doujinshi online, but there is no official manga in Japan, the United States or elsewhere.

In general, the basic outline of Kyatto Ninden Teyandee isn’t really all that different from the Samurai Pizza Cats version.  But, the story is presented differently. The American version has a lighter and sillier tone to it.

In both cases, there is a feudal lord in charge, but he’s useless.  The real power is in the hands of the prime minister, named Kitsunezuka Ko’on-no-Kami in the original and Seymour Cheese or “the Big Cheese” in the American version.

The prime minister is also the main bad guy of the series.  He follows a long tradition of corrupt officials, treacherous advisors and evil magistrates, often in the service of some unsuspecting or foolish leader.

In Japan, these characters can be found in Edo-era period dramas or samurai films. Kyatto Ninden Teyandee plays with the style of historic period dramas — with large doses of modern tokusatsu hero shows mixed in as well.

Throughout the series, the prime minister/ the Big Cheese has many plots to overthrow the feudal lord and take over the city. Luckily, the Samurai Pizza Cats are around to thwart those plans.

In general, the American version is more cartoonish, with more jokes and silly gags.  The Japanese version is a comedy, but it doesn’t have the same cartoon feel. The characters are more serious, even if the situation they find themselves in is outlandish.

In either case, the show parodies the conventions of traditional historical drama, giant robot shows and magical heroes. The bad guys’ plots often involve giant robots or robotic monsters of some sort.

Even if an episode’s main story is about romance or singing idols, the episode will often include a monster or “villain of the week” to fight. The heroes have transformation sequences and pre-fight catchphrases reminiscent of Sailor Moon or Pretty Cure.

The bad guys’ plots are often more obvious and out in the open in the American version, and more subtle and sneaky in the Japanese version. The series is very episodic, with not much of a story arc.

The series is anthropomorphic — the main characters are cats, the head bad guy is either a fox (in Japan) or a rat (in the United States), and everyone else is a cat, rabbit, dog, bird or some other animal.

The setting is a mixture of old and new Japan. There are robotic animals wearing kimonos. Modern technology intermingles with old-fashioned architecture (such as satellite dishes on top of traditional Japanese roofs). The culture is a mixture of classic Japanese style and modern conveniences.

In retrospect, anime fans might notice that the overall mix-and-match style of the show is very similar to Gintama. (Samurai Pizza Cats came out first, so it would be more accurate to say that Gin Tama is similar to Samurai Pizza Cats.) Gin Tama justifies its modern/ Meiji Restoration-era mixture with alien invasions; the world of Samurai Pizza Cats is what it is for no apparent reason. It just is.

The show Steel Samurai from the video game Ace Attorney: Phoenix Wright also has this same futuristic/ medieval feel to it.

In the original Japanese version, the city where our heroes live is called Edoropolis — a name which borrows Edo, the old Japanese name for feudal-era Tokyo. The Samurai Pizza Cats version is called Little Tokyo; it is not related to the Japanese American neighborhood in Los Angeles.

The three main good guys in Samurai Pizza Cats are Speedy Cerviche, Guido Anchovy and Polly Esther.  Speedy is the leader and Guido is Speedy’s rival.

With Polly in the third spot, it fits the typical “main character/ rival/ girl” three-person team pattern found in Naruto and elsewhere in anime.

Polly can sometimes feel like something of a token female. She uses “the power of love” in battle. She has a heart-shaped shuriken and her personality has been described as bossy and sometimes hot-tempered, which is not uncommon for heroines in comedy-adventure/ shonen shows such as this.

Polly is not the only female member of the team, of course.  There is also Francine, the owner of the Pizza Cat Restaurant where the Samurai Pizza Cats are headquartered.  She is often busy behind-the-scenes; for example, she operates the gun-shaped cannon which shoots the main heroes to where they are needed.

Lucille the sheep is a love interest for both Speedy and Guido. (Later on in the series, this changes. By the end of the series, Speedy and Polly are starting to look like a possible couple.)

Princess Vi, or Princess Violet, is the daughter of the emperor.  She has been described as a spoiled brat.

The main villain is the Big Cheese, but he has plenty of help. He is also the commander of the Ninja Crows.

While the bad guys have henchmen (or hench-birds), the Samurai Pizza Cats also have helpers of their own — the Rescue Team.  The Rescue Team includes General Catton, Bat Cat, Meowzma O’ Tool and Spritz T. Cat.

Generally, the Rescue Team only shows up when the main three hero cats are in trouble and call for help. Bat Cat specializes in flying, Meowzma O’ Tool is a digger and Spritz T. Cat is a water cat.

There is also a New York branch of the Samurai Pizza Cats — the New York Pizza Cats. The New York cats are the Sundance Kid, Dee-Dee and Cosmo (Michael, Madonna and Prince in Japanese).

Samurai Pizza Cats is one of those shows where the Narrator might be considered a character of sorts.  He can interact with the other characters, as the show destroys the Fourth Wall on a regular basis.  The Narrator is sarcastic and will comment on plot holes.

In 1991, Tecmo made a video game based on Kyatto Ninden Teyandee, the Japanese version of the series. The Japanese-only game was designed for Nintendo’s Family Computer (“Famicom”) and Tecmo never made an official U.S. version of the game.

Samurai Pizza Cats uses what is sometimes called a Gag Dub. It’s not a straight translation of the original series, but an adaptation.

Americans have been adapting anime and other Japanese pop culture since at least the 1950s – and Western borrowing of Japanese culture goes back before that.

For example, Monet and other Impressionists admired, studied and imitated Japanese art.  You can see Japanese art in the background of a Vincent Van Gogh self-portrait. Gilbert and Sullivan’s The Mikado also dates back to this same period.

When Godzilla, King of the Monsters! Was brought to the United States in 1956, Raymond Burr was added as reporter Steve Martin (no, not that Steve Martin).

Mach GoGoGo became Speed Racer (1967), with some name changes and awkward dialogue where they tried to make the animation match the voices.

Science Ninja Team Gatchaman became Battle of the Planets, with scenes added and old scenes taken out.  Robotech started out as a combination of three anime series.

Samurai Pizza Cats is a silly and funny addition to this history.