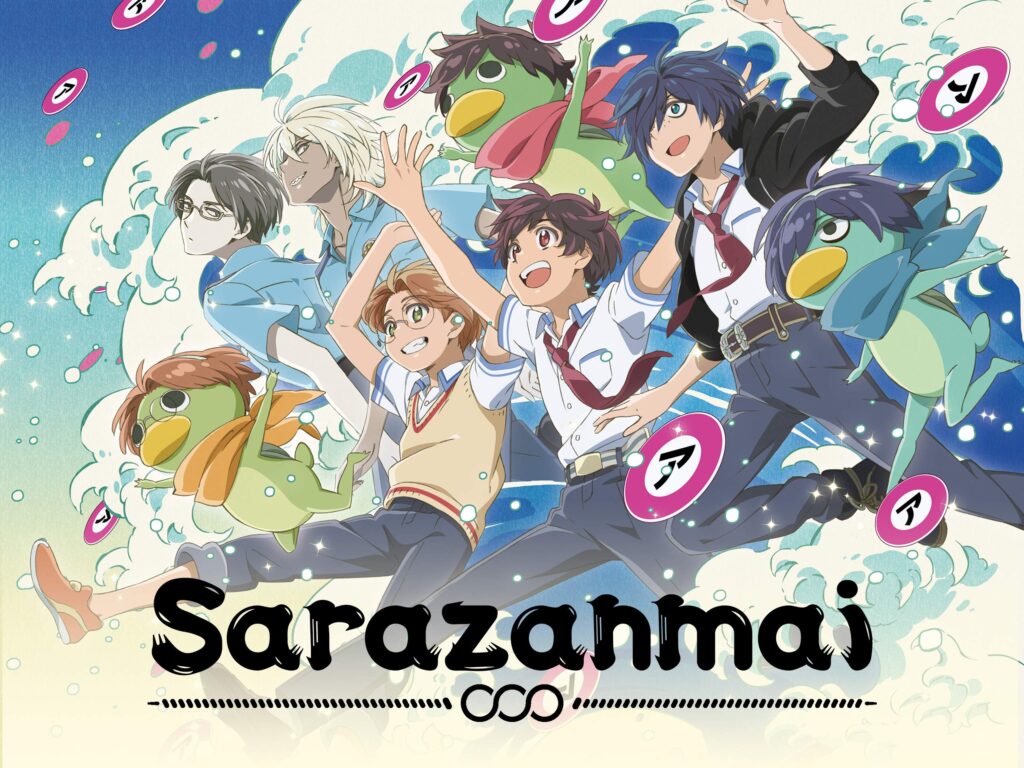 Sarazanmai belongs to a rare category of unique and whimsical anime shows.

These are not your typical long-runner shounen action-adventure anime (where the main guy wants to be the best ninja, best pirate, great wizard, etc.). These shows aren’t magical girl anime or isekai stories, either.

They aren’t always that easy to find, but they may borrow elements from or parody more common anime series. Maybe there are incredible fight scenes, but the basic plot is all about clothes.

These shows are often artistically beautiful to look at, with imaginative and creative animation or interesting locations. They may be philosophical, coming-of-age stories where the main character spends a lot of time talking or thinking about growing up and stuff. There is typically an element of fantasy or magical realism to them.

They are often also short; perhaps only a dozen episodes long.

When you watch one of these, you’re probably thinking, ‘there’s something… special… about this anime.’ And perhaps even, ‘what is going on here?’

The anime studio Gainax was good at producing that sort of thing, and some of the Gainax people brought that to Studio Trigger.

Good examples of this particular anime style would include FLCL and Kill la Kill, or even the more recent Keep Your Hands Off Eizouken.

Sarazanmai is the story of three boys in middle school. They are friends, or at least they seem to be. Throughout the course of the anime, they have a few arguments which threaten to derail their relationship, and that’s the philosophical, ‘coming-of-age’ part of the anime.

The three boys also turn into kappa, an amphibious yokai demon or imp found in traditional Japanese folklore. More about that later. While in kappa form, they have to defeat ‘zombies’ in order to collect magical wishing plates. Collect enough plates, and one wish can be granted.

The kappa boys defeat the zombies by exposing their hidden secrets, and that’s the weird, whimsical and fantasy part of the anime. 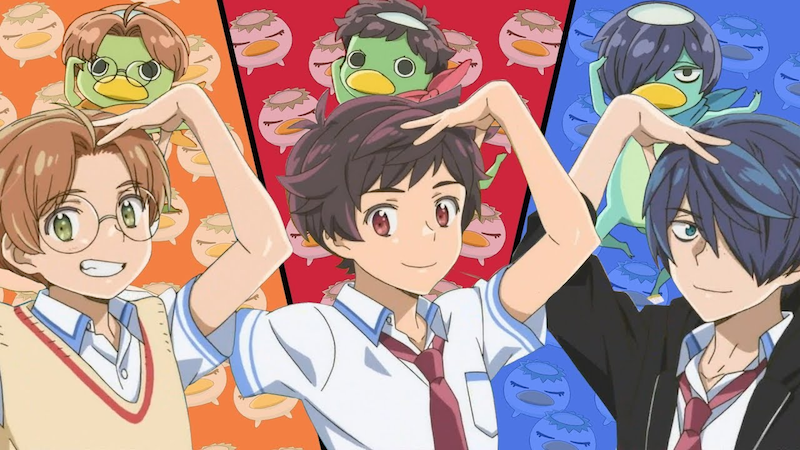 Sara and the Kappas

Before we continue, we need a minor footnote to explain some stuff: Kappa are traditional Japanese yokai.

In art, they are often depicted as turtles, or maybe frogs. (In Sarazanmai, we learn that comparing a kappa to a frog is considered an insult; or at least, it is an insult to the prince of kappa.) They live in or near water. Kappamaki (cucumber roll) is named after kappa, because they like cucumbers.

They are also traditionally shown with dishes or plates on their heads, or ‘sara,’ which is the Sara in Sarazanmai. The show title can translate as ‘three plates‘: three boy kappas, three plates.

The story takes place in Asakusa, which is one of the older, more traditional neighborhoods in Tokyo. (People have identified specific locations in the show as being the same, or at least similar to how they appear in real life.)

The Asakusa area borders the Sumida River, one of the main waterways in Tokyo. There is also an area near Asakusa called Kappabashi, which technically isn’t actually named after the kappa yokai.

Kappabashi can translate as ‘kitchen town,’ but that hasn’t stopped people from making the wordplay association. Kappa are now the mascots of Kappabashi.

Kappabashi is also home to Kappa-dera, a temple with a strong association with kappa. The temple is actually Buddhist, and traditional Japanese yokai are not part of Buddhism. But Japanese people often intermingle Shinto and Buddhist concepts. In this case, the temple has kappa statues, kappa art, and people can give cucumber offerings.

Add it all up, and you have an obvious, wonderful location for a story about kappa. The artwork for the location used in the anime is also quite good. Overall, Sarazanmai is quite nice to look at. 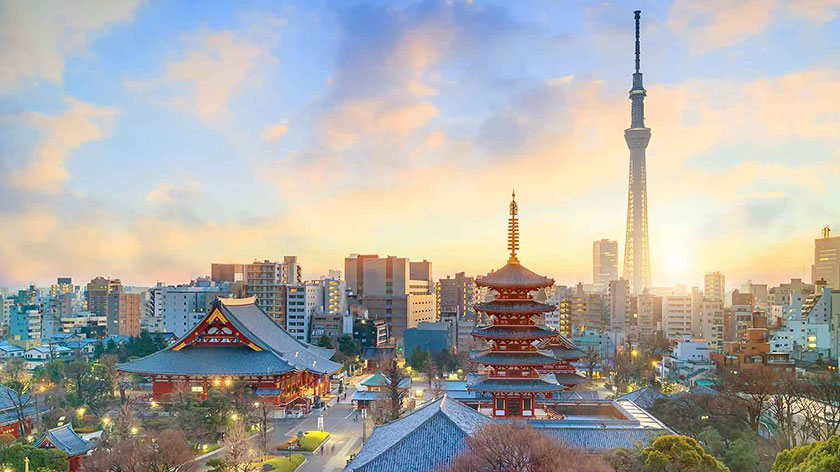 Kazuki and Enta are childhood friends who played soccer together. At some point before the start of the series, Kazuki quit playing soccer. This becomes one of the primary sources of friction in the show.

Tooi doesn’t seem to fit in with the other two; he’s a delinquent. Exactly how he fits in with Kazuki and Enta is not clear at first. Even as the series progresses, his connection to the other two seems a bit limited, but that seems to be part of his loner, tough-guy image. (From a behind-the-scenes perspective, Tooi needs to be a tough guy to contrast with the other members of the three-man team.)

In the first episode, these three boys insult and anger Keppi, the prince of the Kappa Kingdom. Keppi is drawn as a round ball of a kappa; not at all like our expectations. (The anime will later reveal that this is just a temporary condition.) The boys look more like traditional kappa when they transform.

However, this ruler of the kappas is a powerful, magical creature. He easily transforms the boys into kappas, and gives them a mission. It seems that the Otter Kingdom, enemy of the Kappa Kingdom, has been causing trouble for the kappas. Of course, the otters must be stopped.

The otters are represented by Reo Niiboshi and Mabu Akutsu, two ‘policemen.’ These two have been working for the otters, taking human desires. They are the ones who cause the zombie monsters that the kappa trio must defeat. (Since human beings with human desires and secrets are involved, defeat does not mean ‘destroy.’) 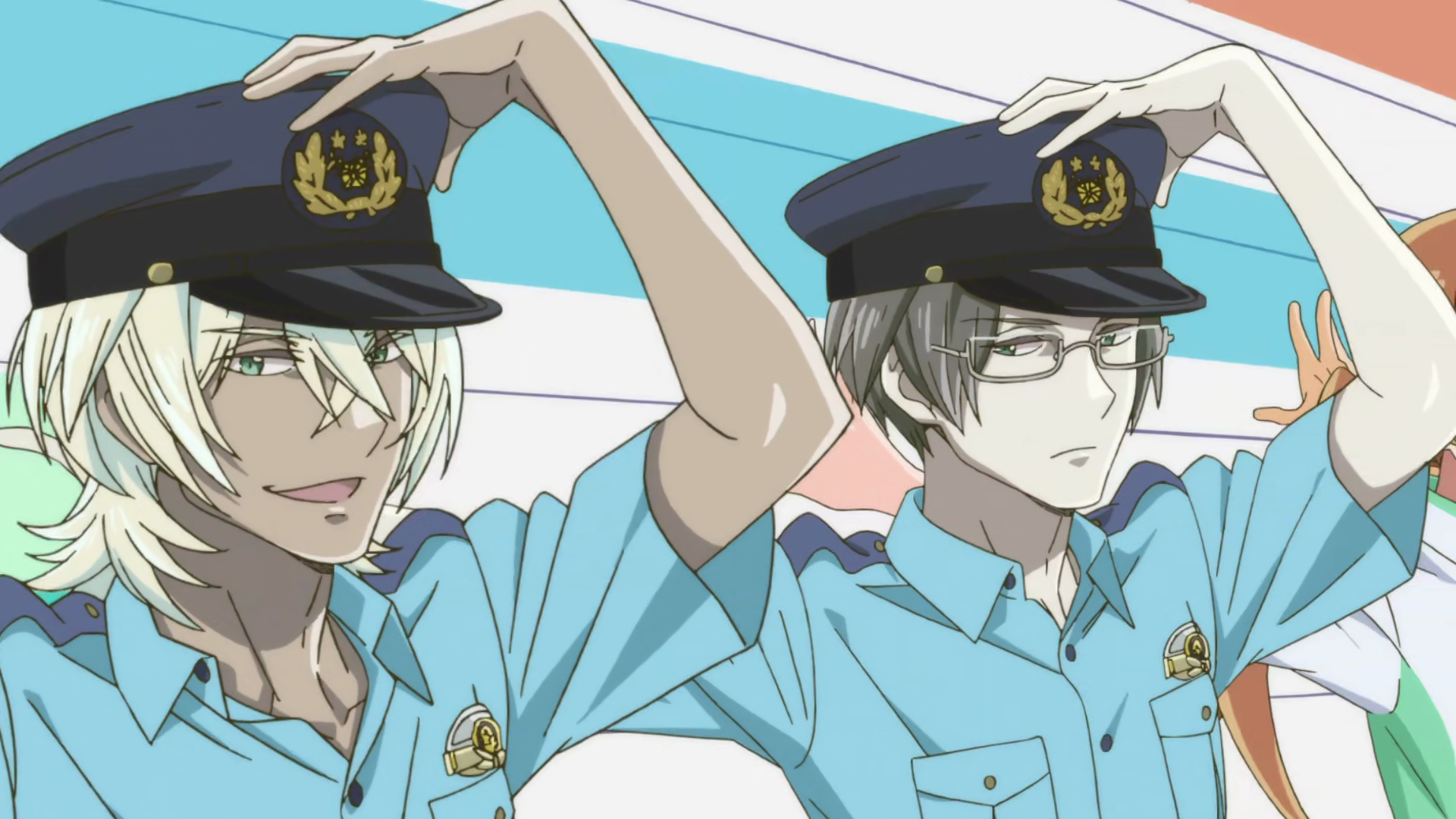 Reo and Mabu have ulterior motives for their actions. But for the time being, they are the villains.

There is also Sara Azuma, Asakusa’s idol and TV host. The theme of her daily show is often related somehow to the theme of the episode. She can comment on the events, either directly or indirectly. 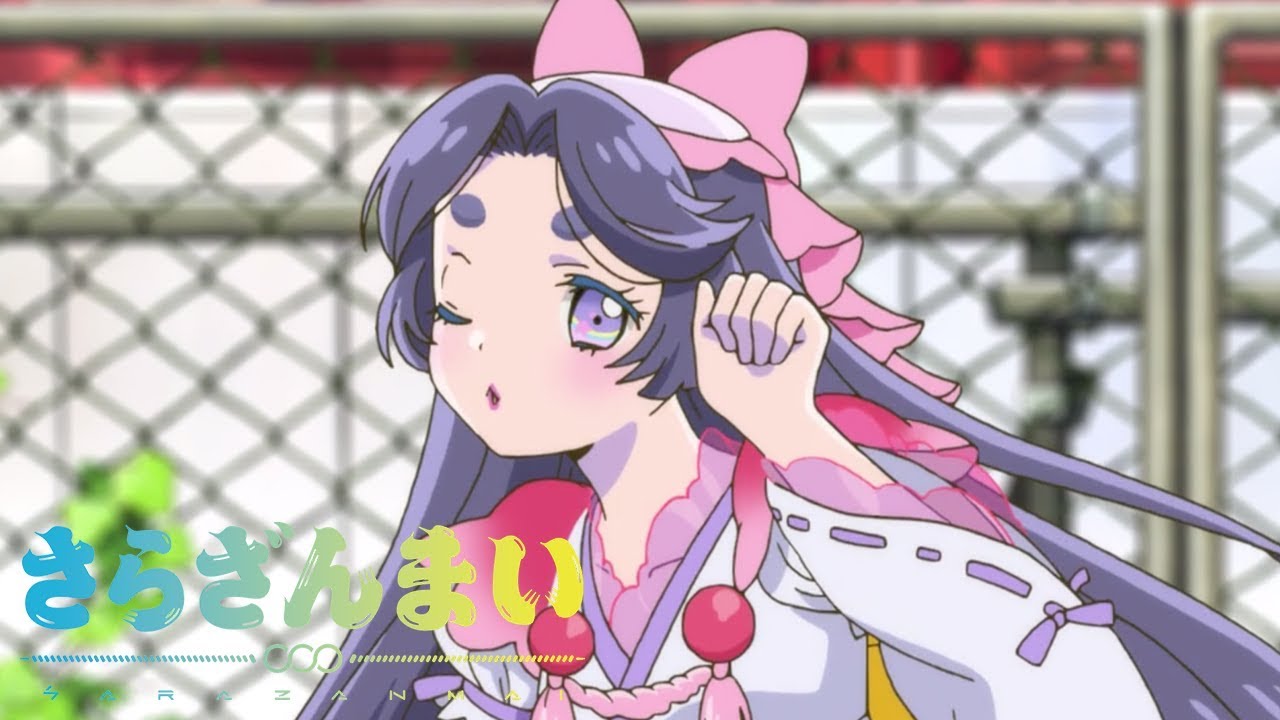 Most episodes have a different monster to defeat. Victory or defeat in Sarazanmai can involve a lot of metaphysical concepts, such as human desires, lies and secrets. What do people want? What are they keeping hidden?

Unfortunately for the boys, revealing the secrets of their enemies requires revealing their own uncomfortable secrets. For example, in the first episode it is revealed that Kazuki crossplays as Sara. (He’s good enough at crossdressing to bear an uncanny resemblance to the idol.) As the series continues, we learn he has a good reason for this.

Speaking of secrets, this show is full of spoilers, so it can be hard to talk about it without revealing some of them. But, there are also spoilers underneath the spoilers. Perhaps that’s appropriate for a show about secrets.

Of course, some secret desires are sexual in nature. One of the kappa boys has a crush on another one of the boys. Meanwhile, Reo and Mabu are heavily implied to be more of a romantic couple, rather than just work partners.

Sarazanmai has some catchy musical themes, especially when the boys are preparing to battle the zombies. There’s a little song and dance in each episode. And Reo and Mabu dance around quite a bit when they are stealing desires.

Visually, the whole anime is a lot of fun to watch. But these scenes really steal the show (no pun intended).

The show also features a lot of people/ kappas pulling various things out of humans (usually from behind, and sometimes painful-looking). This is an essential part of the process of transforming the boys into kappas or taking people’s desires; but it’s also one of the weirder things about the show.

The Sarazanmai anime first aired between April and June 2019, on Fuji TV in Japan. There are only 11 episodes.

A manga was published between May 2018 and March 2019. It is titled Sarazanmai: Reo and Mabu and it features the two ‘policeman’ villains. It is considered a spin-off, as it does not feature the three boys. It is apparently a prequel, with Sara as a baby, and Reo and Mabu caring for her. 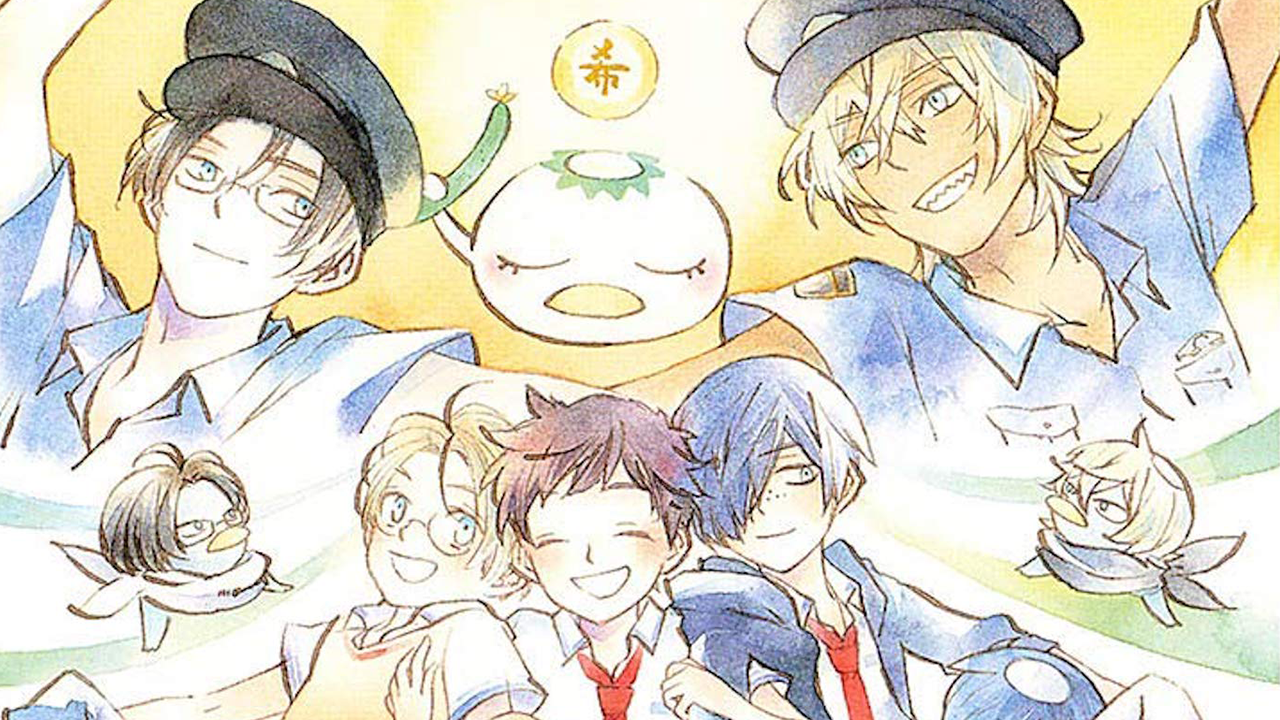 A two-volume light novel of Sarazanmai was published in April and August 2019. The light novel is based on the anime series.

The anime is available at Crunchyroll. English-language translations of the manga and the light novel are expected to come out in 2020.

There was also a Sarazanmai play in November-December 2019. The play was called Sara ni Sarazanmai: Ai to Yokubo no Stage. The show followed the plot of the anime. While most of the cast is different from the anime, Sara Azuma’s voice actress, Teiko Kagohara, plays the same role in the play. (‘Sara ni’ translates as ‘once more,’ and the full English title is given as Sarazanmai Once More – A Stage of Love and Desire.)