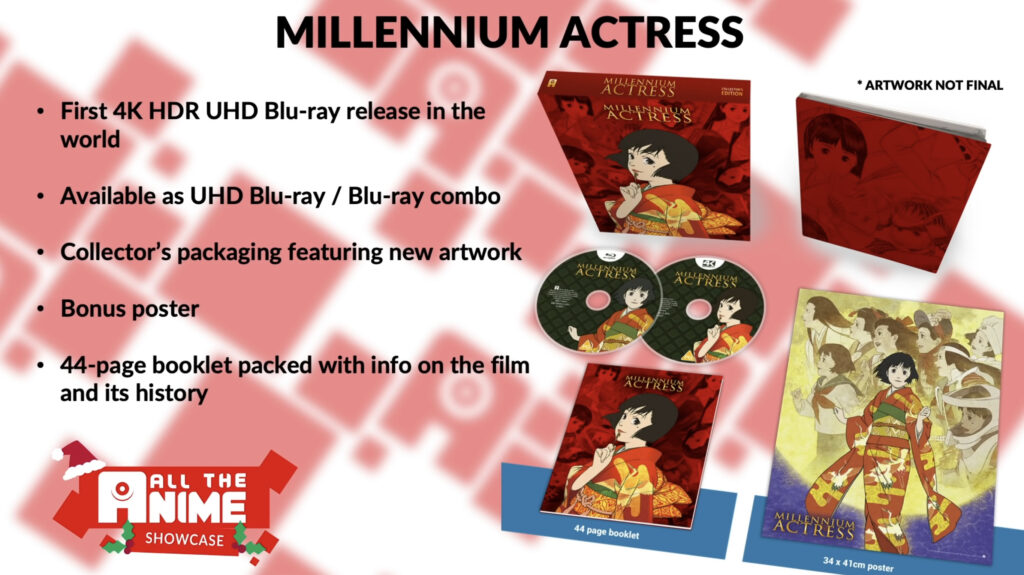 Satoshi Kon’s Millennium Actress may often be overlooked when placed alongside films like Tokyo Godfathers, Perfect Blue and Paprika, but the film is yet another beloved classic from the late director. In fact, it’s hard to believe that the film will be 20 years old next year, having originally released in Japanese theaters all the way back in 2001. UK anime distributor All the Anime announced a new slate of UK anime releases that will be made available for pre-order in the run up to Christmas, and one surprising announcement was that Satoshi Kon’s Millennium Actress would be made available on 4K UHD Blu-ray for the first time worldwide.

The announcement of the first ever release of Satoshi Kon’s Millennium Actress on 4K UHD Blu-ray came as part of a showcase of new announcements to tie into the company’s yearly Christmas promotional sale. This new set, other than being the first ever release of the film in 4K, will also come bundled with a standard Blu-ray and housed within collector’s packaging featuring new artwork. The release will also come bundled with a bonus poster and a 44-page booklet featuring information on the production of the film and the movie’s various influences.

It’s rare, but not unheard of, that a brand-new remaster of a beloved classic anime makes its debut outside of Japan. Discotek Media, known for their dedication to classic anime releases, have remastered titles in the past and are currently working on a new Blu-ray release of Project A-ko that the company are also producing themselves. Still, though the 4K remaster of Satoshi Kon’s Millennium Actress isn’t new and has featured on other releases in other regions in the past, these have been downscaled for release on a standard Blu-ray, making this new UK release the first time it’s been made available in full 4K quality.

No release date for the UK 4K release of Millennium Actress has been announced at this time, though information will follow on this release at a later date through the All the Anime UK website.