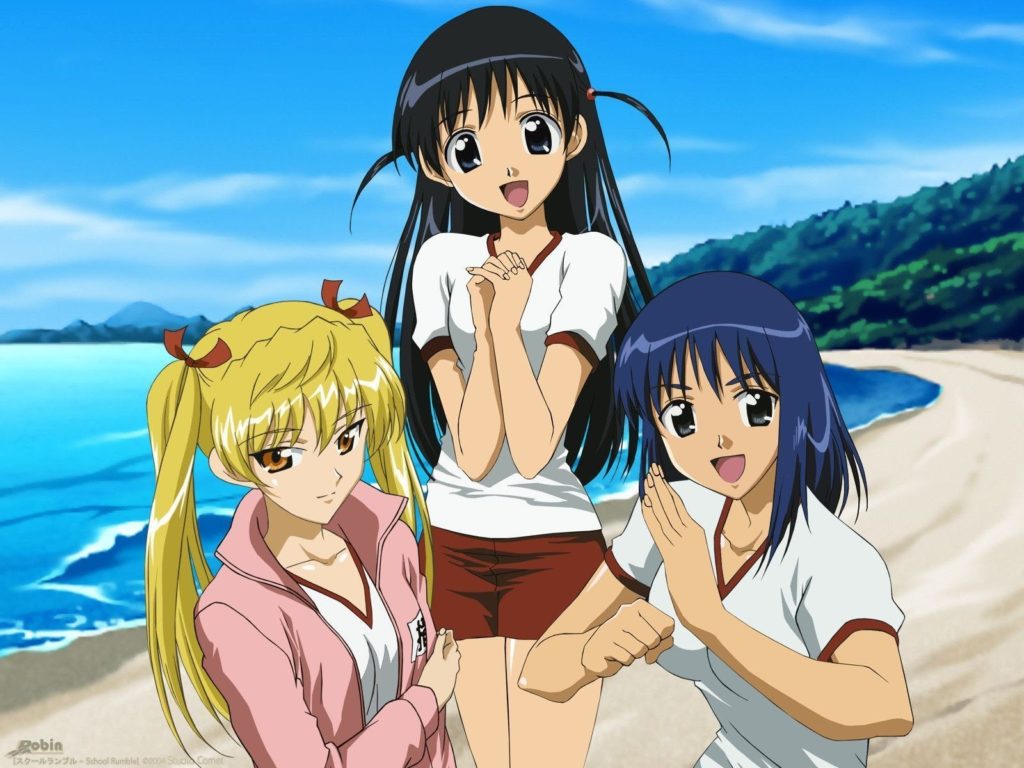 Romantic comedies are a dime a dozen in the anime world, but finding one with staying power isn’t always as easy. How many series have you seen with a harem, a cute new transfer student or a relationship born out of competition? What about a shy girl falling for the jock, a magical girl falling for your average Joe or childhood friends reconnecting? Countless times, I’m willing to bet.

School Rumble is the exception in the often forgettable young-love genre.

The somewhat extreme level of success that School Rumble has managed to reach is noteworthy, but sales and merchandise aren’t the only reason the name carries some notoriety.

The series has, surprisingly, had its share of controversy over the years. The reception isn’t always favorable, yet it continues to garner plenty of complements and praise. What’s the real story? How has one simple high school romance kept burning for almost two decades?

A Hilarious Teenage Love Triangle for the Ages

At Yagami High School, class 2-C is filled with plenty of unrequited love and unspoken confessions. Tenma Tsukamoto, a natural airhead, just happens to be obsessed with Oji Karasuma, the classroom brainiac and token weirdo. He, of course, doesn’t even notice her affections, and she, of course, can’t find the courage to confess.

The school delinquent Kenji Harima is in love with Tenma, only showing up to class for a chance to be near her. He also can’t confess his feelings because teens are usually like that, right?

This love triangle is the main focus of School Rumble, often complicated by outsiders and plenty of commonplace misunderstandings. Yakumo, Tenma’s younger sister, even gets mixed up in things, later becoming Harima’s manga assistant. The question is, will anyone ever really admit their feelings? And is it possible that those feelings could actually be accepted and reciprocated?

The Main Characters of School Rumble

The Original Manga Series was a Bestseller

School Rumble was originally illustrated and written by Jin Kobayashi, and it has since become his namesake. Kobayashi began taking his manga career more seriously during his time away at college, and was recognized by Weekly Shonen Magazine in 2000 as a promising rookie creator.

The magazine, which began serialization in 1959, is continuously a best-seller, and has featured Hajime no Ippo, Devilman, Violence Jack and other legendary series. Currently, Fire Force and Smile Down the Runway call it home.

The School Rumble manga began in Weekly Shonen Magazine in 2002 and continued until 2008, eventually being compiled in 23 volumes. These were released in the US by Del Rey Manga in 2006, and the translation and localization have been applauded for retaining much of the original humor. Currently, the manga is available digitally by Kodansha.

Kobayashi has stated that Kenji is his favorite character in the series, and that the delinquent shares some of his own mannerisms and beliefs.

Though School Rumble has ended, Kobayashi has stated that he’d love to create a new series showing the characters as adults.

In 2004, TV Tokyo brought the manga to life with a 26-episode anime series. Two short OVA series followed, each 2 episodes, before a second 26-episode season aired in 2006.

A third season, slated for 24-episodes, was planned but never animated.

The anime series is designed to stick as closely to the manga as possible, meaning that each episode feels like a disconnected collection of funny skits as opposed to something more linear. More pop culture references are found in the anime, and it’s often compared to Azumanga Daioh or Full Metal Panic? Fumoffu.

Funimation has licensed the series in the US, and fun fact: the second season is rated TV-MA. Lewd jokes aplenty!

Music and Novels and Games, Oh My!

Japan loves releasing different versions of CDs, and the School Rumble soundtracks are no different, with almost every opening and ending theme being released in regular and limited editions. As if that weren’t enough CDs to buy, the eight image albums for each main character were also released in dual editions.

A concert was held in Yokohama in 2004 titled School Rumble PRESENTS Come! Come! well-come? party–yes, that’s a mouthful–featuring the voice actors. A stage play was also performed in 2005 which covered the first season.

The creator, Jin Kobayashi, illustrated two light novels in 2004 and 2007, with each being written by Hiroko Tokita who had written much of the anime script. He is also famous for directing the baseball series Touch and writing for Descendants of Darkness and X.

The Great Fansub Controversy of 2004

Media Factory, the license holder of School Rumble in Japan, announced in 2004 that fans were prohibited from fansubbing episodes of the series.

Cease-and-desist letters were sent to those in breach of this declaration, though certain fansubbing groups continued the practice.

This controversy had led to discussion over the years about the pros and cons of fansubbing. Is it a damaging practice that hurts the creator? Or does it stir up and promote more viewer interest, leading to more series being licensed in the west overall?

Where to Watch and Read School Rumble

The School Rumble anime series is currently streaming on Hulu and Funimation.

The complete manga series is available on Amazon, in either paperback or digital form.