Sci-Fi at the Turn of the Century: Macross Plus 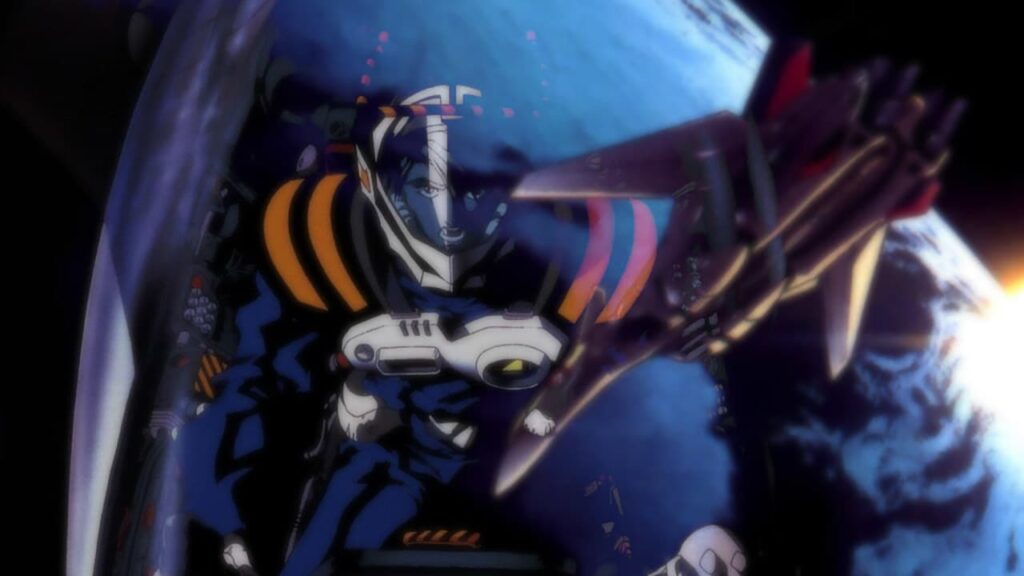 If nothing else, the 90s was a time of vast change. With the advent of the internet, the impending end of the 20th century, a new millennium fast approaching, and new technology emerging at a rapid rate, the decade ended up providing some fascinating examples of the science fiction genre. Among them is Macross Plus.

As a fresh installment in the pre-existing Macross series from the 80s, 1994’s Macross Plus proved to be a perfect example of the change the world was undergoing at the turn of the century.

Utilizing brand new technology to combine computer generated animation with traditional cel animation, Macross Plus proved a groundbreaking and timely embodiment of the rapid technological development of the 90s. Yet, that’s only part of why Macross Plus is the perfect example of sci-fi at the turn of the century.

From Macross to Macross Plus

Another reason Macross Plus is the embodiment of centennial sci-fi is that, just like the decade of the 90s itself, Macross Plus serves as a bridge.

The Macross series started in 1982 with the Japanese anime series Super Dimension Force Macross. Set in the years 2009-2012, the series imagines a world in which an alien spaceship had crashed on Earth.

Mankind was then able to reverse engineer advanced technology, allowing for the development of mechs(giant robot fighters), spaceships that can travel faster than the speed of light, super fighter jets and more.

The series title comes from the name of the spaceship travelling the vast distance of space to Earth, carrying a city’s worth of people: the Super Dimension Fortress Macross. Within the context of the story, the ship would typically be referred to as SDF-1 Macross.

Interestingly, however, a working name for the project was “Battle City Megarodo.” In transitioning from Japanese to English, the ‘R’ in “Megarodo” could either be interpreted as an ‘L’ making the word read as “Megaload,” signifying the amount of people on the spaceship. It could alternatively stay an ‘R’ making the word read as “Megaroad” in relation to the long distance the ship was travelling to get back to Earth.

It would subsequently turn out that one of the series producers was a Shakespeare fan who wanted the titular spaceship to be named “Macbeth.” As a compromise, “Macross” was agreed upon. Bearing a passing similarity to the Shakespeare character, “Macross” was also able to represent the large—or ‘macro’—nature of the spaceship’s cargo and importance, while also addressing the distance the ship needed to ‘cross’.

While the plot of the initial series would tell of the first war between humans and aliens(the Zentradi), while also looking at a number of romantic subplots, from a human-Zentradi relationship to love triangles and beyond.

This first series aired from 1982 to 1983 and consisted of 36 episodes. It would eventually be released in the West as the first season of Robotech, along with seasons of two entirely different anime serving as Robotech’s second and third respective seasons.

In 1984 the movie Macross: Do You Remember Love was released. It served as a redux of most of the story arc from the show’s first season(episodes 2-27 specifically). As such, the majority of the movie’s chronology took place from the years 2009-2012. However, a story within the story also jumps ahead to 2031.

Later, in 1987, an OVA called The Super Dimension Fortress Macross: Flash Back 2012 was released, serving as an epilogue to the 1984 movie.

Another OVA, this time a series, would follow in 1982. Consisting of 6 episodes, Super Dimensional Fortress Macross II: Lovers Again was released to mark the 10th anniversary of the original series. This OVA would serve as a sequel, set in 2092.

Soon enough, the events of Super Dimensional Fortress Macross II: Lovers Again would be retconned to have occurred in an alternate, parallel world. Removing this storyline from continuity would set the stage for none other than Macross Plus.

Serving as the first official sequel to the original Macross series, 1994’s Macross Plus is set in the year 2040, three decades after the original. Released as a four episode OVA, it would also be released as Macross Plus: The Movie a year later.

The 1995 movie version would go on to feature different editing and some additional scenes, but otherwise is the same storyline as the 94’ episodic OVA.

In terms of production, Macross Plus is known for its fight scenes. The story centers around fighter aircraft and as such, director and team member of the original series, Shōji Kawamori took his team to Edwards Air Force Base in Edwards, California.

There Kawamori and Macross Plus action choreographer, Ichiro Itano, would study mid-air dogfights and other training exercises as executed by the folks at the Air Combat USA school based there.

The real world program concluded in 1991, announcing the Lockheed YF-22 fighter jet as the winner of the Northrop YF-23 fighter jet. The production designers for Macross Plus used the Northrop YF-23 as inspiration for the fictional General Galaxy’s YF-21 aircraft being tested in “Project Supernova.”

In terms of the OVA/movie’s soundtrack, the score was composed by Yoko Kanno. Kanno is an iconic composer. Among her various musical works, she’s composed scores for a number of legendary anime such as: Porco Rosso, Cardcaptor Sakura, Cowboy Bebop, Wolf’s Rain, among many others.

Beyond the score, the soundtrack includes a number of songs sung bySharon Apple, a holographic A.I. entertainer central to the plot of Macross Plus. These songs were composed and performed by different musicians with four of the songs performed in the fictional alien language of Zentran. Three of these songs were sung in English, one was in French, with the only song originally in Japanese a track called “Voices.” For the English language release, this song was also translated.

Plot and Characters of Macross Plus

Intended to further develop their fighter aircraft, “Project Supernova” employs two pilots to test the new models of aircraft: Isamu Alva Dyson and Guld Goa Bowman. While Isamu is a bit of a wild child and Guld is half human and half Zentradi—the alien race who mankind defeated in the original Macross series—the two were actually childhood friends.

This childhood friendship has long since devolved due to rivalries and grudges, all of which are only furthered by the arrival of Myung Fang Lone. Myung was also a childhood friend of theirs. The three of them had a massive falling out, which is later revealed to have been due to Guld’s jealousy.

As it turns out, Myung is now the producer for Sharon Apple. As noted previously, Sharon Apple is a holographic AI as well as the most popular entertainer in the galaxy. However, Sharon is incomplete, requiring Myung to secretly provide her emotions during performances.

With their rivalry and grudges freshly brought to the surface, Guld and Isamu continue to butt heads until an accident ends up hospitalizing him. The repercussions of their fight are left to their project’s Admiral, but when they return to the New Edwards Test Flight Facility the station commander, Captain Millard tells them that “Project Supernova” has been shut down.

Unbeknownst to them, back on Earth the Ghost X-9, an advanced stealth Unmanned Combat Aerial Vehicle(UCAV) has just been completed.

At the same time, also on Earth, Myung and Sharon were to have a concert at the Atlantis Dome in Macross City. It turns out, the lead scientist behind Sharon Apple had installed an illegal bio-chip into the A.I. in an attempt to complete her programming. As a result, Sharon has developed an evil consciousness, hypnotizing her audience and the crew of the Macross, trapping Myung with her.

Back on Eden, Guld and Isamu had decided to head back to Earth, intent on proving their superiority to the Ghost X-9. With their crafts’ space-folding capabilities, they are able to make it back just as Sharon hacks into Earth’s outer space defences.

Realizing that Myung is in danger, Guld and Isamu rush off to save her, with Guld facing down Ghost X-9 and Isamu taking on Sharon.

As you can tell, the plot of Macross Plus has to deal with humanity’s grappling with new technology and fears around A.I. In so many ways, these themes tie directly into global, societal concerns at the turn of the century.

The Rest of the Macross Franchise

Following Macross Plus there would be three different full series of anime in the Macross storyline. There would also be five different movies, three OVAs, three manga series, a novel series, a musical, and a video game.

Of the five movies mentioned, Macross Delta the Movie: Passionate Walküre was released in 2018. This relatively recent release served as an edited compilation of the 2016 anime series, Macross Delta.

Overall, Macross and most specifically Macross Plus serves as a prime example of sci-fi at the turn of the century. From it’s 90s era cutting edge technology, to its thematic grappling with concerns regarding rapidly developing technology, Macross Plus manages to do what all great sci-fi does, reflect the society it was spawned from.

Interestingly, the Macross series consistently has managed to achieve such high genre status by always incorporating and highlighting the very human throughline of romance and love triangles. Despite all the aliens and mechs, at the heart of the Macross stories are very human hearts.

One can clearly see this exemplified in Macross Plus as well as a clear bridging from the saga’s 80s origins to the ongoing franchise installments that have stretched well into our current millenia.

The Magic Between Shinichiro Watanabe and Yoko Kanno