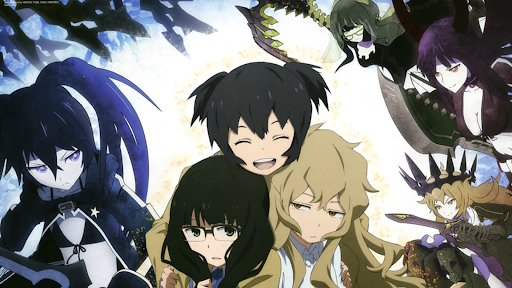 You may not be as familiar with the details, but I guarantee you’ve seen the mysterious Black Rock Shooter with her black “Hatsune Miku” ‘do and flashy “Sans Undertale” eye floating about the internet in the form of edgy fanart, social media icons, etc.

The character was originally conceived by Ryohei “huke” Fuke, the man also behind the character designs of sci-fi visual novel Steins;Gate, around 2007 (this being the earliest the character made an appearance via huke’s social media). The gun-slinging character has since spawned various anime, manga, and video games that exist within their own universes.

Black Rock Shooter’s first animated appearance was in Ordet animation studio’s one-off OVA in 2010. The OVA was then adapted into this studio and Sanzigen’s co-produced eight-episode anime series two years later in 2012.

The show follows a burgeoning friendship between two junior high school girls, creative and friendly Mato Kuroi and soft-spoken Yomi Takanashi. Sure enough, their friendship takes a turn as the titular Black Rock Shooter and other “personas” from a limbo-esque parallel world, the “other world,” begin to sway the real world.

While I’d normally include “Transformation” as a category in rating magical girls, Mato and Yomi don’t turn into their personas, per say. 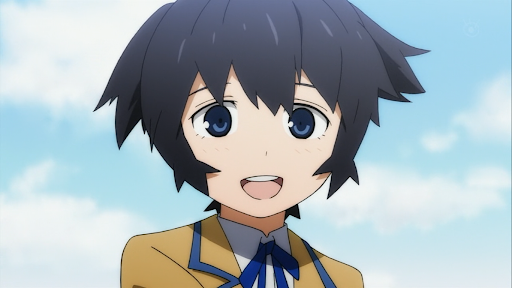 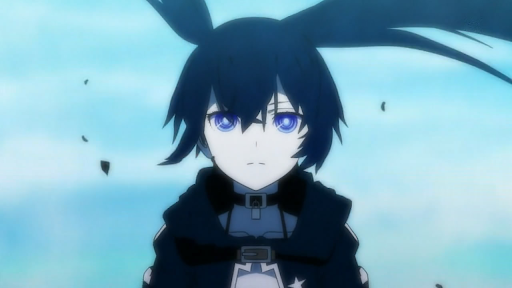 Black Rock Shooter as a whole does a solid job creating a sense of cohesion between its heroines and their personas. There’s an obvious link between the two, but they still stand on their own as individual designs.

Our lead Mato sports a cute, compact design with big blue eyes and short pigtails that evoke her other self’s more elegant features.

Black Rock Shooter’s long, flowy pair of ‘tails and “sports hoodie” provide an interesting contrast to her patches of exposed skin and punk style. You’d think that this ensemble would make her come off as vulnerable, but hey, it works.

When I look at BRS, I see Gurren Lagann’s Yoko and Blue Exorcist’s Shura Kirigakure, and these two happen to be beloved for their equally fanservice-y and striking designs.

BRS’ blaster of choice is an oversized cannon, a “rock shooter” if you will.

I’m a simple woman. I see female characters hauling oversized weapons normally given to male counterparts, they get points they wouldn’t have gotten otherwise.

Mato is your typical shoujo heroine with dreams on the mind and kindness in her heart.

Mato’s easy to like as she’s not above pushing past her fears to help her friends, even at her lowest points during Episodes 5-6.

With that said, none of the personas are particularly riveting in terms of personality. If I had to say something about BRS, it would be that she’s no-nonsense and stoic.

By the end of the show, Mato and BRS’ motives become one.

However, prior to this point, Mato struggles to form and maintain her primary friendships as well as newfound knowledge of the emotion-driven “other world.” I think the framing of Mato’s everyday problems as dehumanizing and even life-threatening from a different reality’s POV really captures the perils of youth.

When it comes to agency, Mato’s actions being her own are portrayed as the least gray.

With that said, the finale hinges on her resolve to bridge the gap between her feelings and BRS’ cold inclination to destroy those who oppose her. 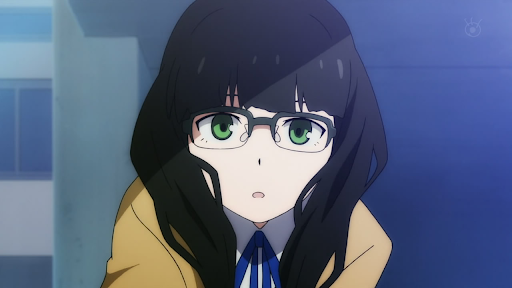 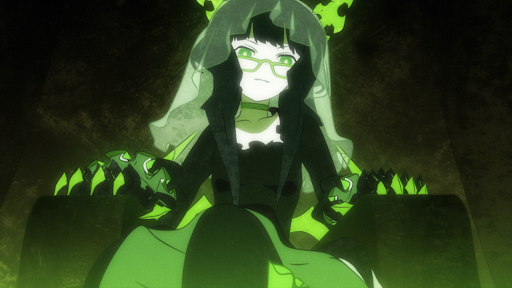 You and Mato’s narrative and visual parallels to Homura Akemi and Madoka Kaname of Puella Magi Madoka Magica were not lost on me.

Yomi’s glasses, gentle green eyes, and well-kept wavy locks come together to give her the perfect bookworm look. On the other hand, Dead Master’s gothic fashion as well as her claws and horns are a far cry from Yomi’s grounded innocence.

I love “Homura” types and I love me some demons, so ranking this composite character was a no-brainer. Which isn’t even taking into account just how vital she is to the plot.

As to be expected from a demonic persona, Dead Master wields a sharp-toothed scythe (even with those sharp claws of hers alone looking prime for punishment).

I find “traditional” weapons far more interesting and intimidating than firearms, so again, Dead Master has a leg up on BRS in that regard.

Yomi could have easily been delegated as the bookish sidekick to Mato’s heroine shtick, but that isn’t the case here at all. In fact, the young girl’s got underlying codependency issues thanks to her toxic relationship with childhood friend Kagari Izuriha.

She desires companionship and validation to the point of being her own worst enemy.

And this is what makes for compelling drama within any genre.

But like BRS, Dead Master doesn’t have a lot going on for her aside from an occasional devilish grin, ominous sense of mystery, and plot relevance.

Yomi and Mato both demonstrate a great deal of strength during their confrontation with Kagari and her cruelty in Episode 2, fueled by a desire to openly be friends.

From this point on, Yomi spends most of her time trying to bond with Mato, but her Dead Master demons continue to rear their heads and open old wounds. Unfortunately, these demons cause Yomi to be pushed to the sidelines for the latter half of the show.

Likewise, Dead Master doesn’t have as strong of a motivation as BRS. 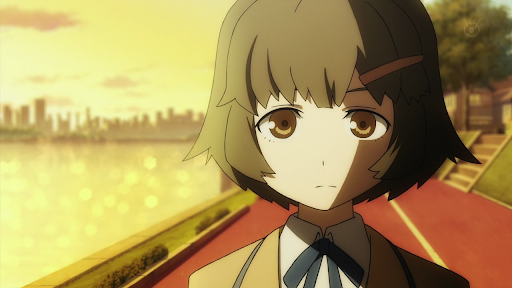 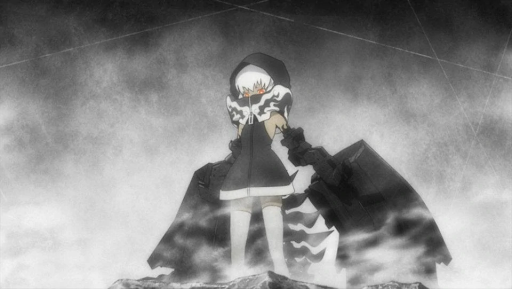 If Dead Master’s design didn’t already make it obvious, Black Rock Shooter’s “heroines” are complex. While the hosts behind the “other world” personas are individuals capable of change and performing good deeds in general, the personas come to represent their repressed selves. Their innate violence.

I think what makes the show so effective in spite of its length is the borderline parasitic relationship between each gal and her persona. Mato may be basic in personality, but still makes for a solid heroine thanks to her relative independence. She and BRS don’t affect the other’s life the way Yomi and Dead Master do.

For the most part, our human characters are at the mercy of the personas’ endless (and seemingly pointless) war. However, Mato and a childhood friend introduced in Episode 3 as a main player, Yuu Kotari, harbor symbiotic ties to BRS and Strength.

With that said, I didn’t bring up Yuu until now as her situation is…complicated.

As important a jumping point as Mato and Yomi’s first arc is, Yuu is bar none the most intimate with the “other world.” She and Strength very much drive the latter half of the show via forming a strong bond with Mato.

To bring this discussion back to scoring, Yuu’s friendly nature is reflected in her “girl next door” design. The young girl’s brown eyes and cute bob (complete with barrette!) evoke many anime best friends and otome protagonists. She’s unassuming.

There’s nothing about her looks that implies ill intent.

Yuu’s persona, Strength, has a bit more edge to her design. She shares her host’s short hair, but that’s where the similarities end. With her high-collar sleeveless hoodie, huge gauntlets, and tail, Strength looks like a petite brawler you’d be foolish to underestimate.

It’s also worth noting that Strength has a darker complexion than Yuu. This tweak could be considered problematic if not for the fact that they’re two separate individuals, albeit linked in spirit. I, for one, welcome any chance at getting more people of color in anime.

Not to mention said characters having that classic dark skin and silver/white hair combo.

A la fellow persona BRS, Strength is a small girl packing an oversized weapon…two, in fact. To put it simply, I love how much her fists contrast with her slight frame.

Out of all of the personas, Strength balances metallic and organic traits the best. Unlike BRS, Strength’s gauntlets feel like actual extensions of her body.

Moreover, these weapons hang low to the ground and are accentuated by the demonic tail sprouting from her back. They work well as an ensemble and as individual pieces.

This is where things get into major spoiler territory…

As it turns out, Yuu and Strength switched places during the former’s childhood. In order to escape a life of bullying and tragedy, Yuu pursued the “other world.” In other words, Mato’s “Yuu,” the girl she remembers being close to since their elementary school days, is Strength.

Remember when I said the personas were lacking in personality? Well, Strength’s the exception.

Strength as Yuu is energetic, but a bit of a slacker when it comes to studying.

But when push comes to shove, Strength completely throws herself into protecting Mato and Yuu.

Due to her upbringing, Yuu as Strength is closed off and lonely. She only finds purpose in avoiding the life she left behind and trailing BRS from time to time.

On that note, Yuu and Strength’s goals are pretty clear.

Yuu wishes to remain safe in her sanctuary no matter the cost while Strength values the bonds she made as a human.

Should I decide to heed the call of the “other world” myself, I’ll dive into the last two gals behind the “villainous” personas Black Gold Saw and Chariot in the near future.