Sega Saturn: The Black Sheep of the 32-bit Era 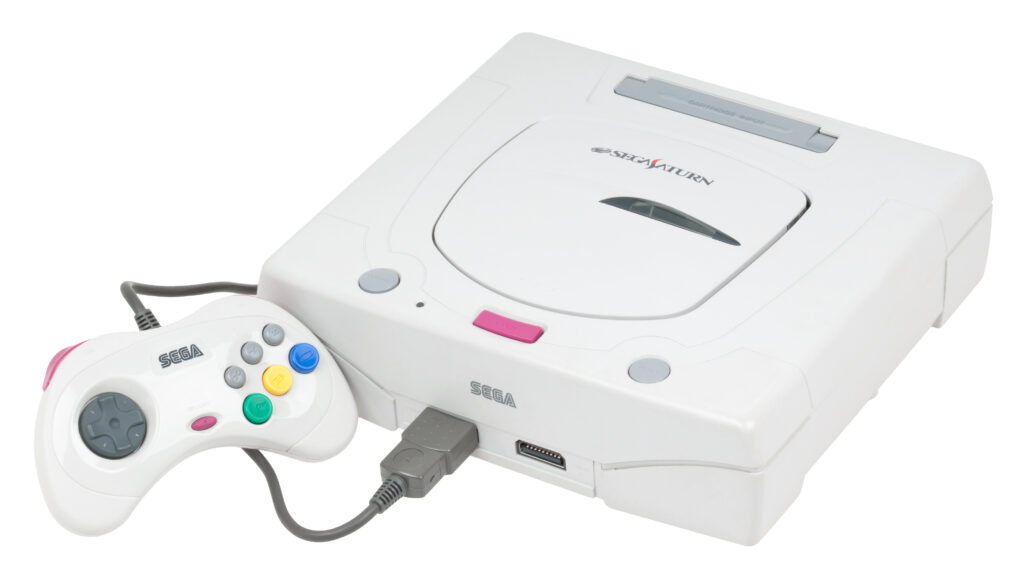 Some have fond memories of it. Others will tell you it was a piece of junk. One thing is apparent: the Sega Saturn was a rather polarizing and profoundly misunderstood console.

The Sega Saturn was Sega’s official 32-bit, CD-based follow-up console to the 16-bit Mega Drive / Sega Genesis. While Sega had previously invested some resources into developing the short-lived 32X as a 32-bit add-on for the Genesis, they went all-in on the Saturn from all directions. Both the American and Japanese divisions of Sega collaborated at various points in the system’s development cycle and even added more processing power once the specs of Sony’s Playstation became known.

The monster they ended up with was a complex powerhouse featuring Eight total processors that was designed with versatility in mind. While other competitors were primarily interested in the future of 3D gaming, the Saturn had the goal of being able to handle both 2D games, as well as 3D games. It excelled at rendering sprites over polygons, but was capable of both.

But the Sega Saturn lived a double life, complete with two separate, strikingly different images. One was a highly competent gaming machine, able to easily run circles around its closest competitor in certain areas. The other was an awkward machine, difficult to develop titles for, that had a small fraction of the software offerings that the other did.

Where did the Saturn go wrong?

North America Was Not Quite Ready for the Saturn at Launch

In the mid-90s, Sega of America’s aggressive marketing campaign achieved great success by continuously throwing shade at Nintendo, instantly earning the approval of the teenage demographic. It was clear that Sega of America was rather successful at promoting their product, and the video games market in North America was roughly dead even as a result. In Japan, however, the story was a little bit different.

The Super Nintendo had a sizable lead over the Mega Drive in Japan for many reasons, including brand recognition, and exclusive support from wildly popular developers like Squaresoft and Enix. The Mega Drive’s image in Japan was much milder, and it simply could not compete with Nintendo, a national treasure by any measure. Tensions were quite high as a result when it came to Sega’s Japanese division.

When the Sega Saturn hit Japan towards the end of 1994, pressure was directed at their North American division to speed up the release of the console overseas and ease some of the uncertainty. While the console already had a set release date about a year after the Japanese release of the console, it was instead unexpectedly dropped on the public in May of 1995 at that year’s E3 Expo.

Sega of Japan was convinced that an early release over Sony’s Playstation would give the console an edge in the market; in Japan, both consoles had launched within a short period of each other with the Saturn releasing shortly before the Playstation, and holding a slight lead.

The logic was as follows: if they could secure a larger grace period in America, maybe they could gain a large lead over the main competition. However, this push turned out to be one of the first bad decisions in a series of mismanagements that ultimately misrepresented Saturn in the West.

Few games were available at launch, and although the console was able to jump the gun, it failed to come roaring out of the gate with any sort of momentum. The price point was way too expensive and easily trumped by Sony’s Playstation, which sold for 25% less. Even availability of the console at launch suffered, and only major retailers were able to secure a shipment.

Although notable games did surface, nothing was ever really propelled to the same reverence that Sonic, Sega’s token Mascot character through the 16-bit era had achieved. Sonic curiously remained in hibernation for most of the Saturn’s time on the market.

Something had to be going well for the Saturn though, right?

Arcade Ports Were the Some of the Saturn’s Greatest Assets

In Japan, it started at launch with a near-perfect port of the classic 1993 arcade fighting game Virtua Fighter.

The Sega Saturn was always able to produce high-quality, near arcade-perfect ports of popular arcade titles. Sega’s own AM2 department was responsible for Virtua Fighter, Virtua Fighter 2, and Daytona USA, one of the most successful arcade racing games of all time, all of which made their way with near-perfect accuracy to the Saturn in both markets. Virtua Cop, a light gun game also developed by AM2 followed.

Another major player in the arcade market at the time was Capcom, excelling in the Fighting Game genre. X-men Vs Street Fighter, Marvel Super Heroes Vs Street Fighter, Street Fighter Alpha, and Vampire Savior are among some of the arcade titles in the late 90s that found their way to the Sega Saturn, to shock and amaze gamers at what the console was capable of.

With an added RAM expansion cart that was packed in with the releases of some of these games, the perfect arcade experience at home was finally available.

The Sega Saturn’s stock controller also featured 6 face buttons in a layout similar to that of which was popularized by Capcom’s first big arcade fighter hit, Street Fighter II, making it perfect for the proverbial gauntlet of fighters unleashed on the Saturn.

Naturally, all of the Capcom ports that made their way to the Saturn ran smoothly and felt comfortable to play on the Saturn, over Playstation ports that were sometimes incomplete, ran poorly, and had a far less suitable means for executing precise combos due to the less optimal layout of Playstation’s original controller. By comparison, arcade-perfect gameplay was at least a generation away for Sony.

What Were Some of the Other Best Games for Sega Saturn?

As the console was reaching its peak in 1998, this RPG set in the Panzer Dragoon universe was ready for release. It received universal critical acclaim, and was considered a masterpiece by virtually everyone fortunate enough to own it. The problem is that almost no one in the West was granted the pleasure of playing it due to extremely small release quantities. It has been known to sell on eBay for hundreds of dollars, and has never been ported to a modern platform.

While on the subject of RPGs the Mega Drive / Genesis was somewhat lacking in the JRPG department, and Sega had no intention of letting the Saturn suffer from the same deficit. Camelot developed the Shining Force III trilogy for the Saturn as three separate standalone games that converged into one storyline.

Game Arts released their best-in-class anime-style RPGs Lunar: Silver Star Story, Lunar: Eternal Blue, and Grandia on Saturn first as well, albeit in Japan only. All were eventually given Playstation ports and localizations in other regions.

Nights Into Dreams is a 2.5D action game developed by the same team responsible for Sonic the Hedgehog. It is ultimately what the Saturn got in lieu of more Sonic. At face value, this was a huge negative for the Saturn, as Sonic could effortlessly move more consoles than a completely unknown new IP.

However, the game itself is another absolute classic that received a large amount of praise. The game shipped with an additional “3D controller” that was more suitable for it than the standard Saturn controller due to an added analogue stick.

From game studio Treasure came Guardian Heroes, a 2D Beat-em-up side scroller with glorious anime-esque aesthetics, and Radiant Silvergun, one of the most unique and cherished  Shmups ever made. Both games are indisputable classics, but Radiant Silvergun, unfortunately, did not have a Western release. Both were eventually re-released for digital download on the Xbox 360 in 2011.

The Saturn had way too many remarkable games for the somewhat disgraced reputation it has in the minds of most gamers who were around during the late 90s, and one of gaming’s biggest tragedies is that many were not given the chance they deserved in the West.

Even worse, the Saturn remains to this day one of the most difficult consoles to emulate. It still remains a struggle for gamers to enjoy the trove of Saturn’s most exclusive classics. For ones that can overcome accessibility, software scarcity, and often language barriers, dozens of gaming adventures await.