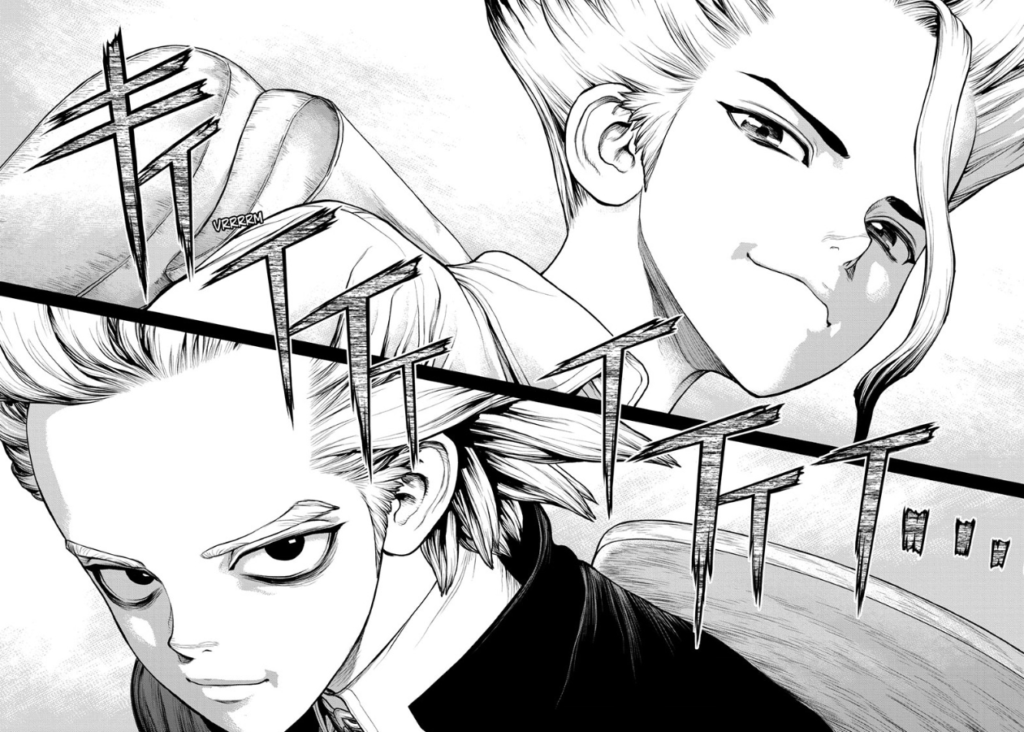 Dr. Xeno is one of the best things to happen to Dr. STONE in a long time.

Being introduced not long after the stunning end to part three, his role as an antagonistic as well as philosophical foil to the protagonist Senku has been fascinating to behold. It makes uncovering each chapter a joy each week in a series that already lay very close to my heart and, on the whole, it would be no understatement to say that his character has elevated Dr. STONE to near-perfection in my mind.

Even so, Xeno’s introduction comes after an uneasy period in the series’ ongoing narrative that was only briefly touched upon in my last long-form piece about Dr. STONE, published more than a year ago. To properly understand and analyse his importance, we’ll need to backtrack just a little bit and discuss some spoilers. Those who aren’t caught up with the original manga, beware! You have been warned.

My last Dr. STONE piece ended with a brief discussion of the Treasure Island arc, which had only just begun when it was published. Since then, it has concluded, giving us much more material to work with and critique. In a word? It was mixed.

That’s not to say that the Treasure Island arc didn’t have its fair share of entertaining moments. Far from it. Such events as the three-dimensional battle and Hyoga’s reanimation were duly highlighted in my Jump Time column, which aims to sort the wheat from the chaff each week when it comes to Weekly Shonen Jump. Nevertheless, the fact that the series has been featured much more prominently since Xeno was introduced speaks to the fact that Dr. STONE has improved mightily since then, and for one main reason: he’s a compelling villain.

One of the problems correctly identified by my last Dr. STONE piece was how series author Riichiro Inagaki was seemingly contradicting himself in order to extend the narrative past an obvious conclusion.

This is because Tsukasa and the Empire of Might were defeated at the end of the Stone Wars arc, effectively resolving the series’ core character conflict. As a result, a lot of the story’s momentum was lost, leading towards what I, and many others, saw as an imminent conclusion.

That assumption has since been proven false, but the problem still remains: how do you keep a series going that has lost one of its core driving antagonists? Unfortunately, if the answer was introducing more antagonists like Minister Ibara, then I would’ve given up long ago.

Ibara isn’t a bad character. Not really. He’s threatening, overwhelming, and has a large enough personality to fill Tsukasa’s similarly large shoes. But the problem is that he has no depth to him; instead, he’s an antagonist for having an antagonist’s sake.

The Philosophy of Dr. STONE

What made Tsukasa so compelling as a foe to Senku was undoubtedly the philosophical differences that divided them.

Senku is an optimist, believing in the power of science and that it could help the revived humanity overcome the problems that were present pre-petrification. Tsukasa, meanwhile, experienced the corrupt state of the past society through the treatment of his sister firsthand and decided that it needed a complete reset; hence why he only revived the strong.

Ibara has none of this philosophical complexity. He’s quite simply a greedy man, desiring power and dominion over others. He’s also a pervert, seeing women as his own personal objects, which is obvious proof that he is a capital B bastard. So when he and Senku come into conflict, it’s hardly as compelling as Dr. STONE was in the past.

Enter Xeno. At first, I’ll admit that I wasn’t entirely convinced by his addition. In chapter 156, Riichiro Inagaki dedicates a whole chapter to his back story, essentially rewriting the canon in order to make him fit. This felt a little clumsy, as well as even a little disrespectful, but a conversation between Xeno and Byakuya as to what they would do ‘if [they] were sent back in time to the stone age’ got me paying attention: this was the revival of the philosophical conflict that had given the earlier parts of Dr. STONE so much weight.

In a word, Xeno is a nihilist. He believes in a technocracy where ‘the cleverest among us could rule over the ignorant masses’ and is striving to create a society where the scientific method can be implemented without impediment. You could also compare him with the early rationalists, who believed that everything should be subject to ‘reason’ and that nothing should come in the way of it, even the existence of God. Of course, Xeno is a 21st century man, so he isn’t dealing with this, but you can see traces of both philosophies in his thoughts and actions.

Once again, this is diametrically opposed to Senku. As mentioned before, he is an optimist, believing in the power of science in much the same way as Xeno but also in the potential of mankind. His view is not that the ignorant should be ruled over by the gifted (a classic technocracy) but that the gifted should help the ignorant, raising them up and, therefore, raising the scientific and philosophical level of mankind as a whole. That’s why he takes a chance on such people as Magma, who hate his guts.

Dr. STONE’s Xeno: On the Road to Redemption

Of course, in reality, both Senku and Xeno are right to some extent. It is true that sometimes the intelligent can come into conflict with the ignorant (just look at the USA’s handling of the COVID-19 pandemic for evidence of that) and that a more forceful implementation of what is ‘reasonable’ might sometimes prove useful. But Senku shares in many of our own natural inclinations to believe in those around us, not wanting to leave them behind. Man is, at heart, a social being.

To editorialize a little bit, what both philosophies miss out is the fact that we live in a class society. From the dawn of human civilization, humanity has been divided into different social groups based on their relationships to the means of production and subsistence, giving birth to different class interests. At each stage in our development, what is ‘reasonable’ comes into conflict with what is ‘possible’ and those relations are smashed asunder; if Xeno really wants to implement the purest form of science, then he should first look at putting an end to class society.

At the same time, Senku is undoubtedly naïve to believe that everyone can come together, regardless of their class interests, and work in the pursuit of a common goal. But this is a Shonen Jump manga, so of course the more optimistic viewpoint will win out in the end. I would expect nothing less.

Luckily, the reconciliation between Senku and Xeno will not simply come about because Weekly Shonen Jump cannot advocate for social revolution. Instead, Riichiro Inagaki planted the seeds long ago for some sort of redemption when he introduced both their shared pasts: Xeno and Senku confront each other not just as ideological foes, but as teacher and pupil.

In this sense, Dr. STONE’s Xeno is well on the way to redemption. But this will be well earned when it comes, and his importance to the series will still remain: revitalizing its philosophical trappings and providing much food for thought each week. Get excited!

You can read Dr. STONE for free via VIZ Media’s Shonen Jump.