From Anime to Manga, The Seven Deadly Sins is a Blast 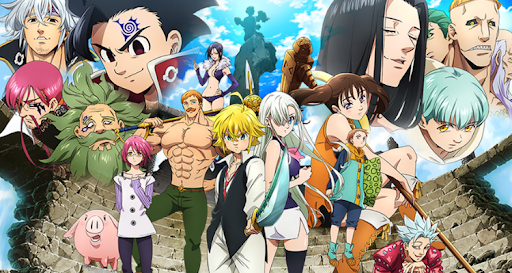 When Netflix released the anime adaptation of successful manga series The Seven Deadly Sins back in 2015, they only had the exclusive rights to one other anime series, Knights of Sedonia.

It’s crazy to think that the streaming platform that practically invented binge-watching and now actually produces its own anime series, once only had two Netflix Exclusive anime series. That growth and development is due in large part to the success of The Seven Deadly Sins.

When the special was released on Netflix, it was initially referred to as Season Two causing some confusion when the actual second season, The Seven Deadly Sins: Revival of The Commandments, was released.

Since then, Netflix has adjusted the series listing to refer to each season/special by the name of their story arcs. While the first season is listed simply as The Seven Deadly Sins, the next two are listed as Signs of Holy War, and Revival of The Commandments, respectively.

Though the movie, The Seven Deadly Sins: Prisoners of the Sky, was released on Netflix in 2018, neither of the series’ 2015 OVAs have yet to be made available on the streaming platform.

Set in a fantasy inspired version of a Middle Ages Europe, the series focuses on a country called Britannia and a cast of characters; particularly a crew of deadly knights referred to as The Seven Deadly Sins. 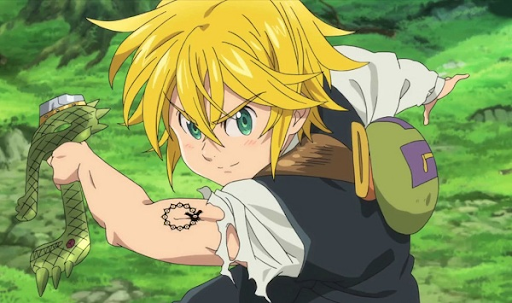 Leader of The Seven Deadly Sins, Meliodas bears a dragon tattoo that represents the cardinal sin of wrath. Though he looks young, Meliodas is actually the thousand-year-old son of the Demon King. Former leader of a different order of demons called The Ten Commandments, Meliodas betrayed his father and order when he fell in love with the Goddess Elizabeth.

Upon this betrayal, which started a Holy War, the Goddess Race to which Elizabeth belonged cursed Meliodas with immortality, while the Demon King cursed Elizabeth to live and die, being reincarnated over and over again.

Hailing from the fallen kingdom of Danafor, Elizabeth was adopted by a princess named Baltra Liones. When the Great Holy Knights take over her new kingdom, Elizabeth seeks out the Seven Deadly Sins for help.

Upon meeting Meliodas, she feels familiar with him somehow. Well, it is eventually revealed that Elizabeth is the reincarnation of Goddess Elizabeth, whom Meliodas had initially fallen in love with.

Elizabeth eventually regains the memories of her past, though doing so triggers the curse, causing her to die again. However, Meliodas does retain his memories of past relationships with Elizabeth. In particular, Liz, as a previous incarnation of hers was called, was a warrior from an opposing kingdom.

Don’t let the avian name fool you, Hawk is in fact a pig. More specifically, a talking pig. After finding Melodias in a ditch years ago, the two became friends, starting a traveling bar together called the Boar’s Hat. The Boar Hat Tavern is able to travel because it rests on the back of Hawk’s Mother, a giant green pig. 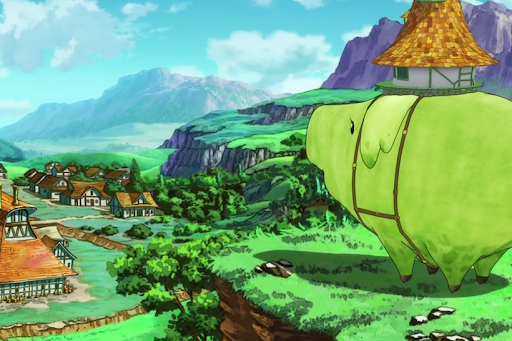 At one point, Hawk gets a magical eye that allows him to see the power stats of anyone he’s looking at. Hawk also has the ability to temporarily take on the power of any magical creature he eats. It’s eventually revealed that Hawk comes from Purgatory and is the younger brother of a creature named Wild, that the Demon King uses to spy on Meliodas.

Meliodas, as wrath, is the leader and one of the seven warriors that make up this titular order of knights. Before the start of the series, the Seven Deadly Sins were disbanded and branded as traitors to the kingdom of Liones.

Having gone their separate ways, Meliodas started the Boar Hat Tavern to gather information on the locations of the others, which aligned perfectly with Elizabeth’s desire to find them as well

Beyond the central characters are figures like Arthur Pendragon, also known as King Arthur, from actual British lore. There are Demons, Goddesses, Fairies, other orders of knights, vampires, royal families, and more. As far as fantasy series go, The Seven Deadly Sins definitely has something for everybody.

Aside from the Anime & Movie There’s More Seven Deadly Sins

Sure, Netflix does have The Seven Deadly Sins, Signs of Holy War, Revival of the Commandments, and the movie Prisoners of the Sky, but if you want more of Meliodas and company, you have options.

As of February 2020, 40 volumes of the manga have been released. The creator of the series, Nakaba Suzuki, says there will be one more volume still to come, as well as side stories.

There is also a comedic spin-off manga series called Mayoe! The Seven Deadly Sins Academy! which looks at the series as if all the characters were actors performing in a live action TV show. The series has been collected into four volumes.

Man With a Mission: The Masked Band Behind Songs Like Seven Deadly Sins