Shadows House almost slipped under my radar in this anime season filled with heavy hitters like Shaman King and My Hero Academia Season 5. But I’m glad I had my eyes peeled and caught it. Adapted from the manga of the same name by duo Somato, Shadows House’s first episode wastes no time in drawing viewers into its gothic world. Faceless shadow aristocrats live out their days in a mysterious mansion, attended to by human dolls who act as their ‘face’. We follow Emilico, who has just started her first day working for the family’s young lady Kate. Over the course of the episode, the two strike up a friendship.

The episode’s opening is a little unnerving, to say the least. We have shots of the aristocratic Shadow family, as well as a look at a rather gloomy world run by soot with even birds made from it. But more to the point, we see a group of children (including one that appears to be Emilico) pledging their loyalty to two aristocratic shadows. Our next shot of our heroine is her sleeping in a box with a grate covering. But just as we’re trying to work out what we’ve just seen, Emilico awakes and goes about her day. 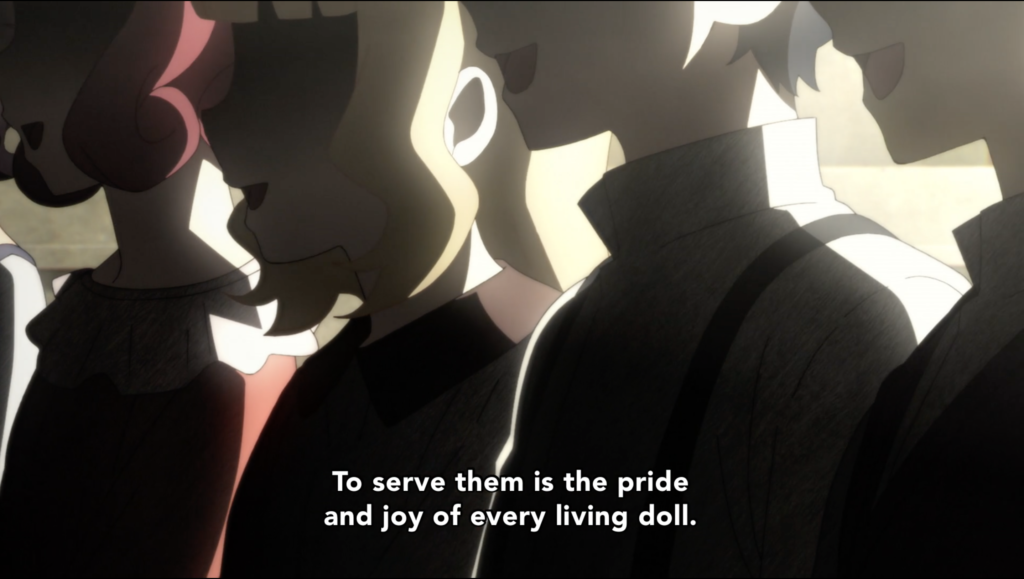 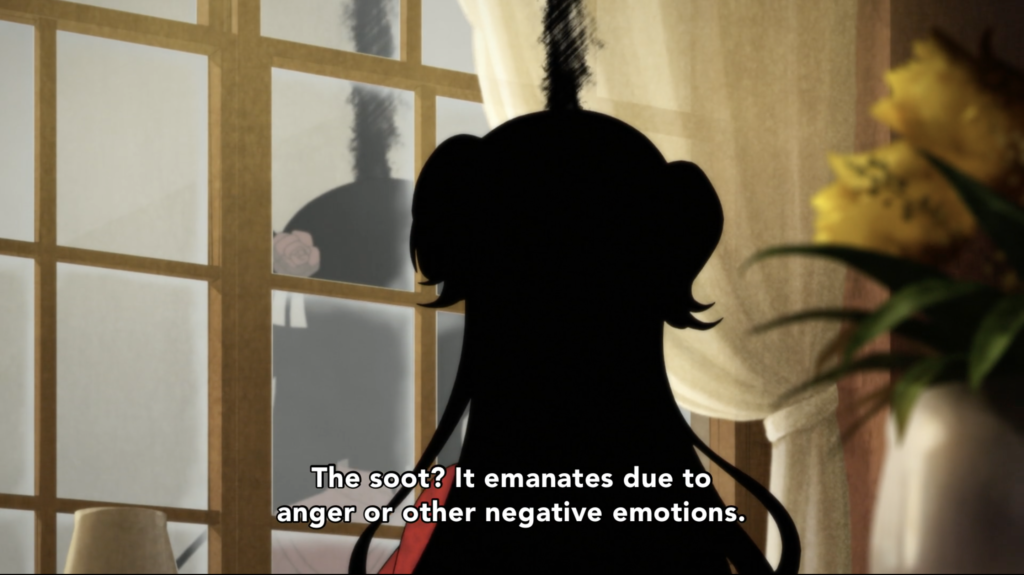 And it’s once her day starts that the story pivots, leaving behind the intrigue of the world to Emilico’s new everyday life with Kate. Emilico is a bright heroine, and the combination of funny and sweet scenes between her and Kate threatens to almost lull us into a false sense of security. But a small hint dropped here and there keeps the audience hooked and on their toes.

Emilico is a doll, and at one point even wonders if she’s defective. But we also see that she gets hungry and feels pain, making us question whether she is a doll or human. Of course the episode isn’t completely focused on Emilico, and Kate herself brings up quite a lot of questions about Shadows, the creation of soot, and their physical appearance.

As the episode goes on, only more questions pop up, often interspersed amongst the comical scenes of Emilico and the budding friendship between the two girls. It’s a slow burn, and can border on being frustrating, as you’re desperate to get back to the mystery that was teased at the beginning. I can imagine the series will continue with a similar pacing, and we’ll have to wait and see if the agonizing build up will pay off. 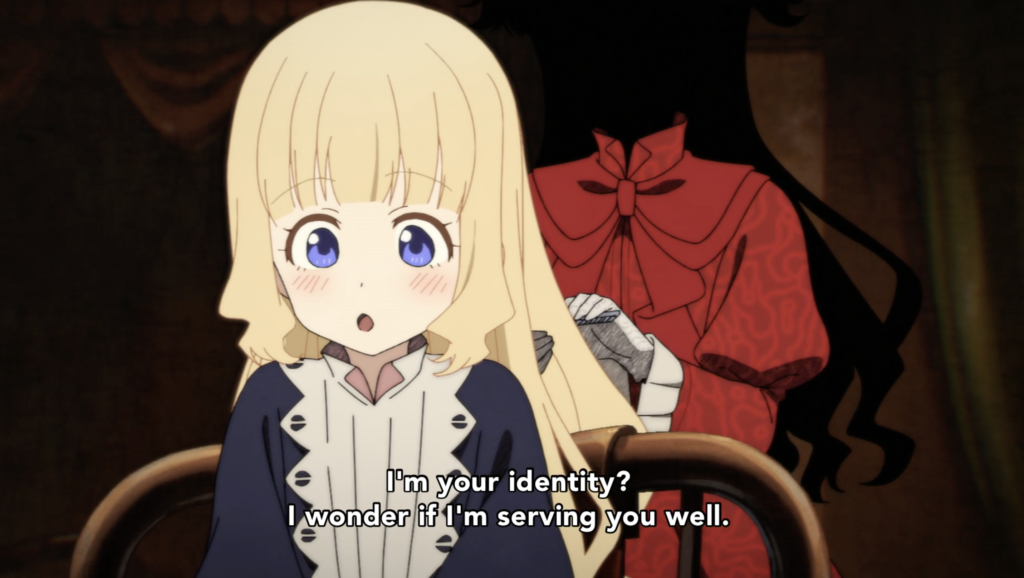 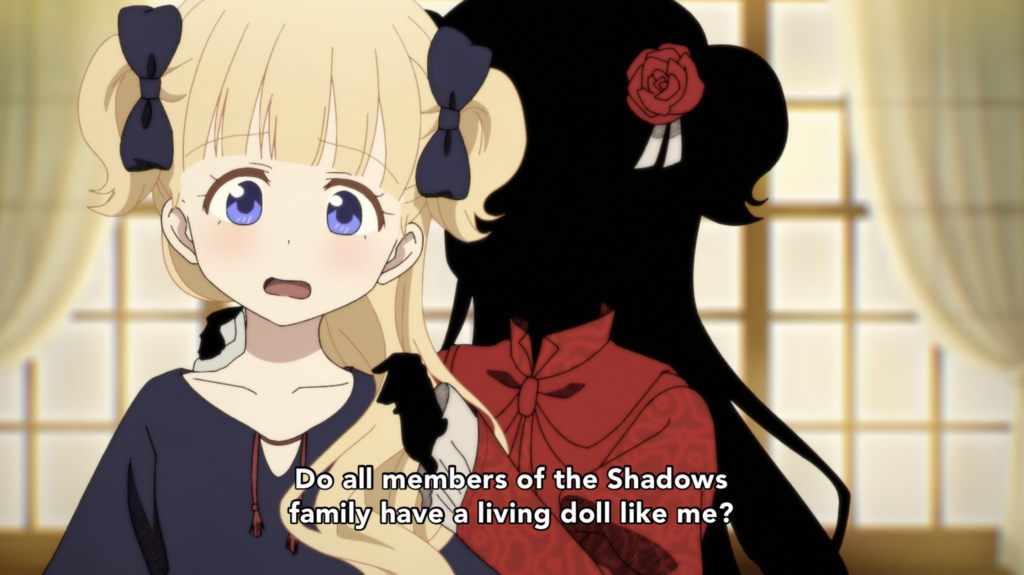 Complimenting the story is the show’s visual stylings, which are immediately eye-catching. Just as the story balances between tense and sweet, the imagery teeters between gloomy and vivid. Your eyes are immediately drawn to characters, but also searching for details in the soot-stained background. I also have to finally mention the show’s ED song ‘Nai Nai’ by ReoNa, which is another great hit! But what struck me most was the ending graphics, particularly that final shot of the house in the snow globe, where instead of snow there was soot was falling. It’s a fun detail in an already unique sequence.

Shadows House has definitely taken me by surprise and has completely hooked me. It’s a show I fear may be overlooked by seasonal watchers, but for those who do pick it up, I can imagine it will end up being quite the ride. There’s a sense of enchanting unease to this series, and I for one will definitely be tuning in week to week to see how this unique and tantalizing story unfolds.

Shadows House is streaming on Funimation.