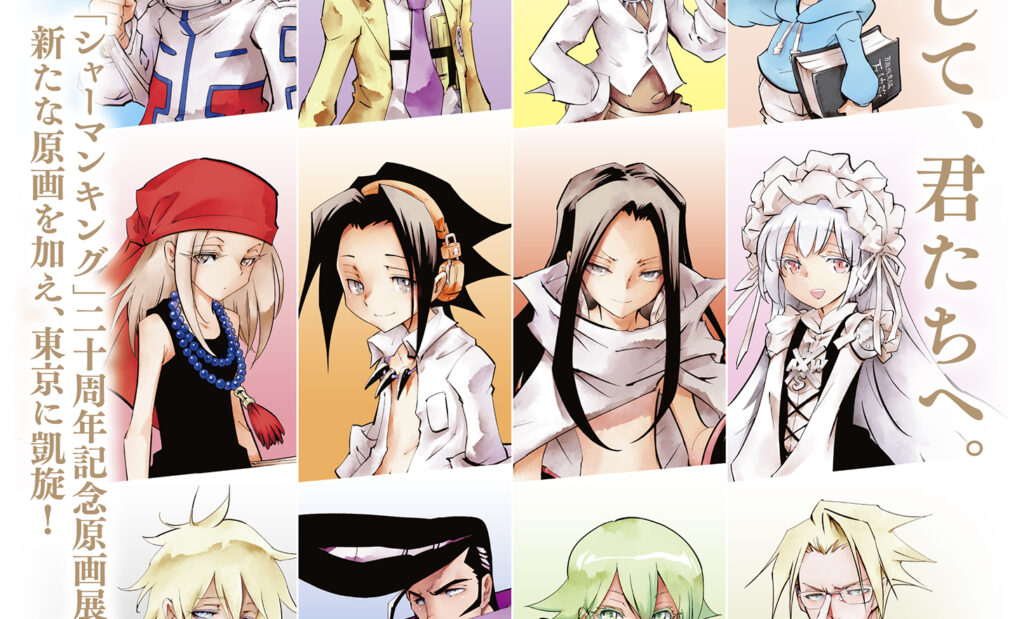 The Shaman King 20th anniversary exhibition is making a “triumphant return” to Tokyo tomorrow, a full year after it was initially announced. The exhibition, titled ‘Shaman King Ten: Tokyo Gaisen (Triumphal Return),’ originally kicked off in Tokyo in November of last year, before moving on to Osaka and Aomori the following year. Containing lots of original manuscripts and art from series creator Hiroyuki Takei, this is one exhibition that Shaman King fans don’t want to miss – especially since this is probably the last time you’ll get to see it.

As Comic Natalie explains, when visiting the Shaman King 20th anniversary exhibition you are first greeted by an introductory video from “folklore scholar” Hikari Mandai, before making your way to the entrance proper. There, you will find a massive, full color illustration taken from the series’ first chapter – a fitting way to kick off an exhibition all about exploring 20 years of Shaman King history.

Moving into the exhibition itself, there are several exhibits that display original manuscripts and pages from the series’ run in Weekly Shonen Jump. Each one of them has their own theme and “atmosphere” – for example, the area dedicated to the sub story ‘Mt. Osore Le Voile” (never released in English) is accompanied by a song sung by voice actress Megumi Hayashibara.

Visitors to the exhibitions will also get the chance to see Hiroyuki Takei’s color illustrations in all of their glory, taken from either the magazine’s color pages or the covers for the volume releases. Of course, there is also a gift shop, themed café, and photo spot at the very end, so make sure to check the official website for more details.

To be honest, it is a shame that the Coronavirus makes travel to Japan from abroad currently impossible, as this Shaman King 20th anniversary exhibition is definitely worth coming out for. Not only does it feature a bunch of exclusive material, it also acts as a celebration of a series that has for so long languished in copyright limbo – hopefully, this exhibition as well as the upcoming English releases and TV anime change that.

The Shaman King 20th anniversary exhibition will run in Tokyo one final time from September 4 to September 13 in Sunshine City, Ikebukuro.