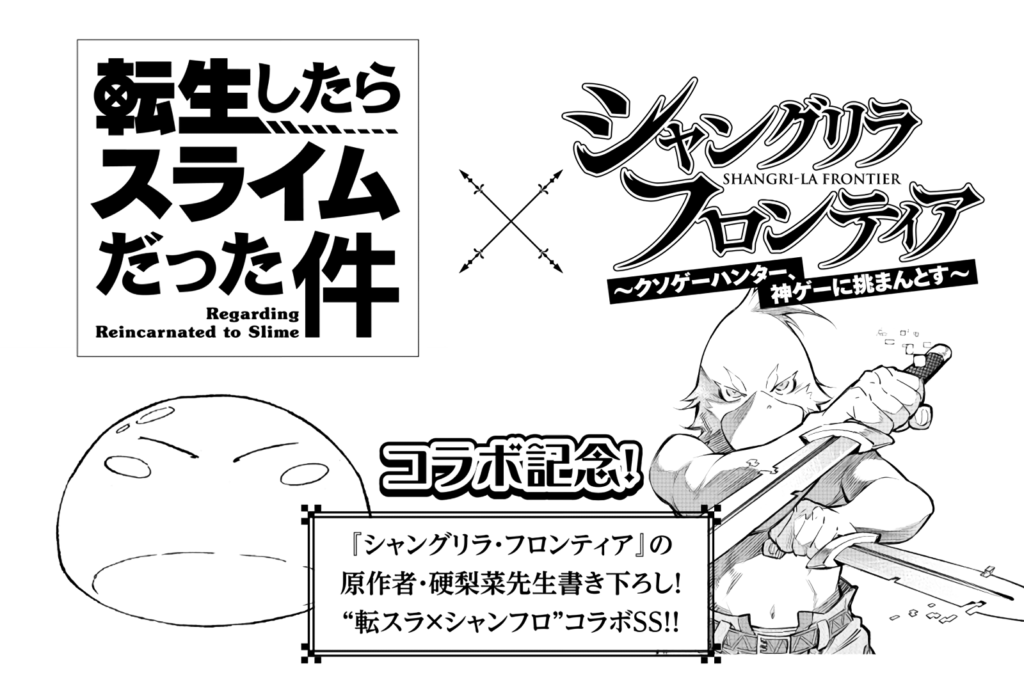 Two of the biggest isekai series in Japan right now are undoubtedly That Time I Got Reincarnated as a Slime (aka Tensura) and Shangri-La Frontier. The former is a light novel behemoth that has spawned multiple manga and anime adaptations since starting in 2014, while the latter is also a light novel that was catapulted to record-breaking success once its manga launched last year. Seeing Tensura and Shangri-La Frontier come together for a collaboration is therefore quite remarkable, regardless of what you think of either series.

It was announced a while back that Tensura and Shangri-La Frontier would be teaming up for a collaboration, but details were admittedly quite thin on the ground. Fast forward two weeks, however, and we finally have some concrete information: displayed in Japanese bookstores will be special point of purchase advertisements featuring comments from the original creators on each other’s respective series, and a special story penned by the Shangri-La Frontier author.

To take the first thing first, the comments attempt to describe the appeal of each series from each author’s respective points of view. Here’s Tensura original creator Fuse’s thoughts on Shangri-La:

‘Shitty games might just be the perfect kind of game. Looking back on my time hooked on MMOs, if there was a game like Shangri-La Frontier, then I probably would have bunked off work and just played it. I never had as much skill as Sunraku, but this manga is sure to excite anyone who loves games!’ 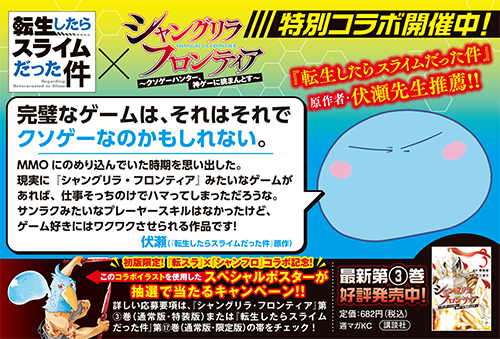 And Katarina (Shangri-La) on Tensura:

‘I’ve seen so many weak slimes and strong slimes that I’m honestly sick and tired of them. But how about the strongest slime? Well, read this manga and find out.’ 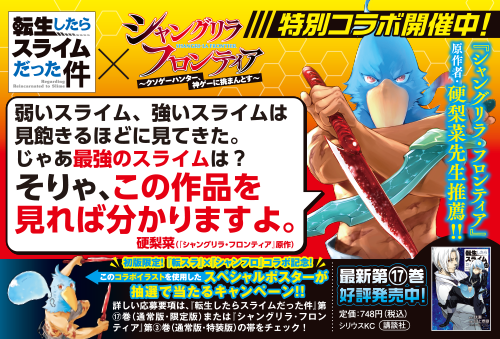 Katarina also penned a short story for this Tensura collaboration, imagining what Shangri-La Frontier protagonist Sunraku would do if he woke up one day as a slime. This’ll be attached to the latest volume of the That Time I Got Reincarnated as a Slime manga when it goes on sale in Japan on 31 March.

This isn’t the most extravagant of collaborations, nor is it exactly accessible to overseas audiences. What will be interesting to see, however, is whether a collaboration with Tensura can boost Shangri-La Frontier’s profile even further.

You can read That Time I Got Reincarnated as a Slime and Shangri-La Frontier in English via Yen Press and Kodansha USA, respectively.