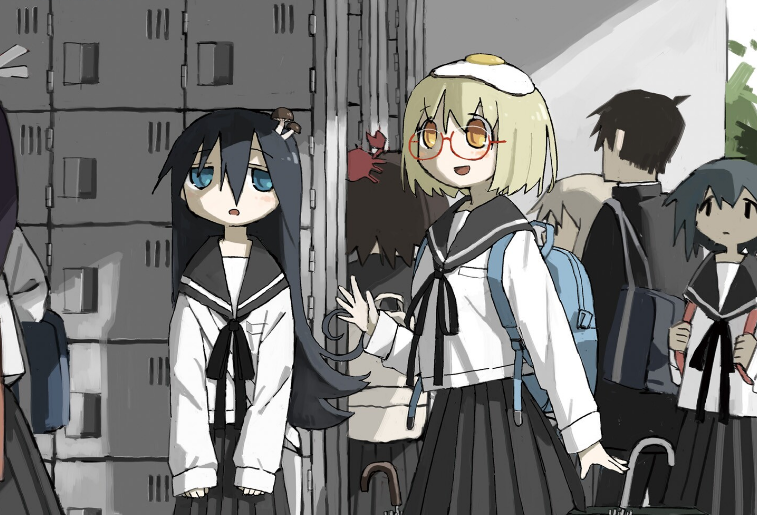 More than a year has passed since Tsukumizu launched their follow-up series to the incredible Girls’ Last Tour, Shimeji Simulation. Like many others, I spent the majority of 2018 obsessed with the story of Chito and Yuri, enraptured by the series’ unique sense of atmosphere and profound insights into the human condition. So when Shimeji Simulation volume 1 went on sale back in February, I naturally picked up without a second’s hesitation.

But was it worth the wait? It presumably took this long for Kadokawa to put out the series’s first volume because of its monthly serialization in Comic Cune, so the anticipation had been building for some time. Would Shimeji Simulation live up to Girl’s Last Tour? Would Tsukumizu’s second gig prove successful? The answers to those questions may surprise you.

Shimeji Simulation and the Shadow of Girls’ Last Tour

Immediately upon opening Shimeji Simulation volume 1, fans of Girls’ Last Tour will feel right at home. Everything that made that series unique is here: a rough yet detailed art style, pitch-perfect character dynamics, a great sense of humor – the list goes on. There are even a couple of guest appearances from Chito and Yuri themselves, which only serve to strengthen the ties between the two series. Nevertheless, there are some significant changes.

The first one comes with regard to our main characters. Shimeji Simulation follows the story of Shijima, a young girl who spent the majority of her middle school years as a hikikomori hiding in a closet, but decides to give high school a go. There, she meets Majime – an energetic young girl wearing a fried egg on her head (don’t ask) who asks Shijima to be her friend. She initially refuses, but it doesn’t take long before the two are as thick as thieves. 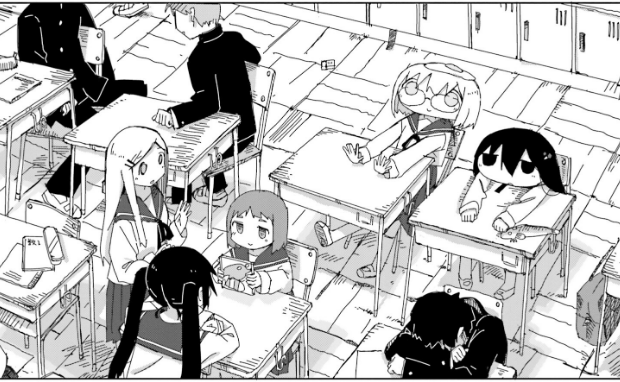 Just from that account alone, it should be clear how similar the dynamic of Shijima and Majime is to the dynamic of Chito and Yuri; one of them is black-haired and dour, the other one is blond-haired and energetic. But they are also somewhat different. For starters, there is a process of character development that occurs between the two. Unlike the somewhat static relationship between Chito and Yuri, we get to see not only how Shijima and Majime meet but also how they become friends, changing along the way. It’s a sweet story, and one that is made even sweeter by the constant yuri fanservice performed along the way.

By the way, it should be noted that the various appearances made by Chito and Yuri in Shimeji Simulation volume 1 aren’t entirely inconsequential. The two characters have somehow made their way into this world after the end of Girls’ Last Tour and are living their best lives, enjoying all the fruits that civilization has to offer. Seeing these two happy is enough perhaps in itself, but their appearances also serve to strengthen the mystery of the overall narrative, which increases in scope and importance throughout the first volume.

In any case, perhaps one of the biggest departures that Shimeji Simulation makes from Girl’s Last Tour is in its format. The series was specifically marketed as a “4-koma” four-panel comedy series, akin to all of the other series that run in Comic Cune. This means that certain expectations are formed – you’d expect it to be something along the lines of Nyanko Days or Pan de Peace in terms of irreverent, fluffy comedy. But things aren’t quite that simple, as Shimeji Simulation volume 1 makes clear.

At least at the beginning, Shimeji Simulation volume 1 plays out normal enough. It follows the natural comedy that arises between Shijima and Majime as they slowly become friends, also introducing us to a handful of entertaining side characters along the way: the arts and crafts teacher Mogawa – who is also the supervisor for the “Hole Digging Club” (as ridiculous as it sounds) – Chito and Yuri, who are living real lives in this universe, as well as Shijima’s sister, as of yet unnamed, who conducts crazy science experiments.

Tsukumizu also follows the format of a 4-koma manga fairly faithfully. Just as advertised, the action of the series plays out in multiple series of four panels, only breaking out occasionally to spotlight a character introduction or make clear a change in scenery. 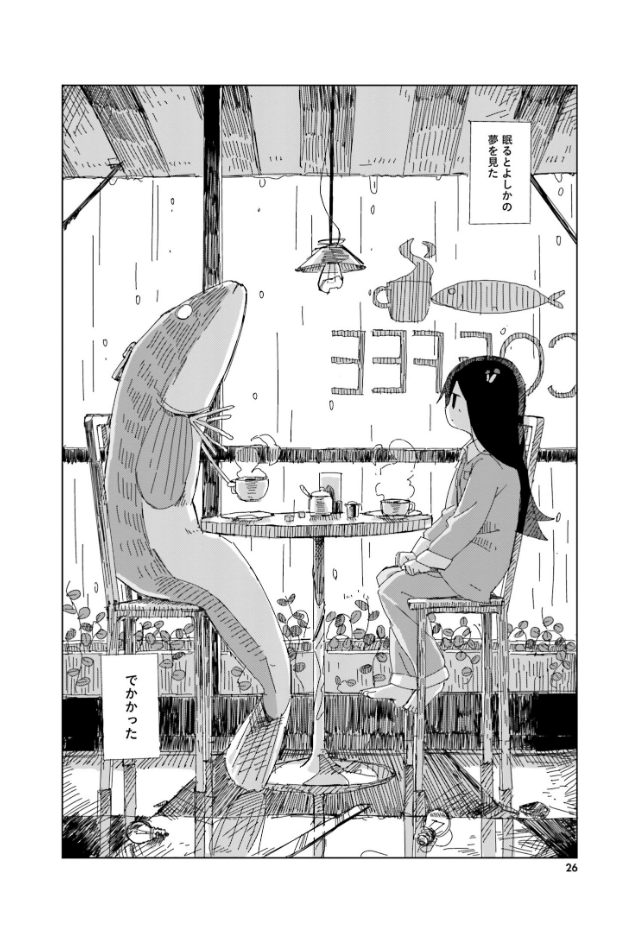 That doesn’t mean, however, that Tsukumizu’s art suffers as a result. On the contrary, their art style feels more alive than ever. While there is no concrete evidence of this, you have to imagine that the incredible success of Girls’ Last Tour – especially after the anime starring Inori Minase and Yurika Kubo aired in 2017 – essentially gave the artist carte blanche to do whatever the hell that they wanted.

And it shows. Not only is the story absolutely bonkers (which we’ll get onto in a minute), but the artwork here feels even more full of Tsukumizu idiosyncrasies than ever; some of the compositions in here are absolutely breathtaking in their detail and beauty, especially when Shimeji Simulation volume 1 dives into surrealism a little later on.

Even so, in order to let the artwork of the series truly breathe, it becomes increasingly clear as the series goes on that the four-panel layout is no longer up to this task. Accordingly, as the story drags on, Tsukumizu breaks the mold more and more. By the end of Shimeji Simulation volume 1, the author is even back to the old panelling style that they used in Girls’ Last Tour, which makes you question the validity of the artistic choice in the first place.

That being said, this may be the point. Accompanying this change in art style is also a change in story, shifting from the comedic thrust of the series’ early chapters to a more narrative-driven approach by the very end. This is driven by the crazy experiments of Shijima’s sister which pose more questions than they do answer, but also intersects with the relationship between Shijima and Majime – bringing everything full circle.

Already, there are theories abound as to the true nature of Shimeji Simulation. As the title suggests, is it a simulation? Is it a dream? If so, who is dreaming it? Why are Yuri and Chito here? Is this the afterlife? What happened to Shijima, then? Why is she here? In this sense, Shimeji Simulation volume 1 has already captured the imagination of Tsukumizu converts. 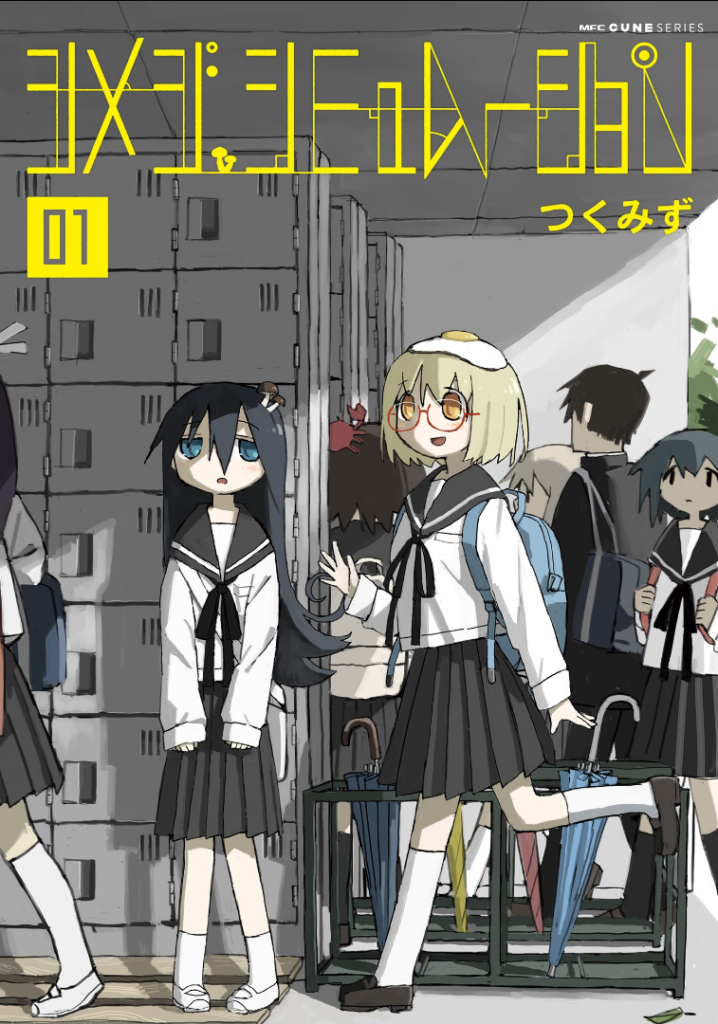 But will Shimeji Simulation volume 1 convert the non-converted? Maybe not. Although there are important differences, the series is very similar to Girls’ Last Tour and features many of the author’s iconic idiosyncrasies, such as the rough yet complex art style and yuri fanservice. Incorporating Yuri and Chito, in turn, may leave those not familiar with the author’s prior series in the lurch somewhat.

Nevertheless, from the viewpoint of a die-hard fan, Shimeji Simulation volume 1 was a great success. It has more than enough potential to rival and even succeed Girl’s Last Tour, especially if it builds on the mystery of its overall narrative. Reading the series also made me feel right at home, almost like I was back in the heady days of 2018. That feeling, under these current circumstances, was also a welcome one.

You can pick up Shimeji Simulation volume 1 via Kadokawa.