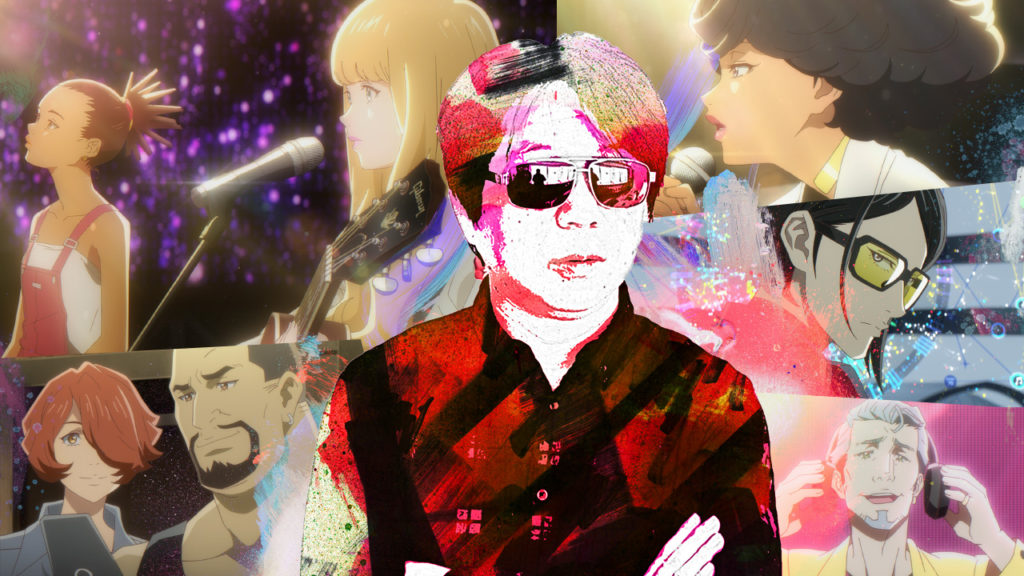 Earlier this year legendary creator & director Shinichiro Watanabe released “Carole & Tuesday”, a story with focuses on the power of music, to critical praise worldwide. OTAQUEST co-founder ☆Taku Takahashi sat down with Mr. Watanabe to discuss a variety of topics including the focus on music in Carole & Tuesday, and his feelings about the ways artificial intelligence could influence popular culture in the future. We present the first part of this interview below which focuses on Carole & Tuesday and the use of music Shinichiro Watanabe’s work.

☆Taku Takahashi: In your newest creation “Carole & Tuesday”, you are credited as the chief director, is that something like being the supervisor?

Shinichiro Watanabe: That’s not exactly a proper translation. I feel that I am the director and that Mr. Hori is the co-director. For “Macross Plus” the director was Mr. Kawamori (Shoji) and I was the co-director, but in reality, it was really like a co-director role rather than just a supervisor…..

Shinichiro Watanabe: Exactly. Something more along those lines.

☆Taku Takahashi: For “Space Dandy” you were the supervisor and Shingo Natsume was the director. Was that also similar to being a co-director as well?

Shinichiro Watanabe: It was. Honestly speaking, recently I’ve been quite overloaded with anime work and I don’t really create too much anymore, but my work as a director is increasing a bunch. For example, in “Carole & Tuesday” I am doing basic supervision tasks such as checking the whole story, storyboards, and screenplays. I don’t have the chance to check every single storyboard though. I leave the final details such as color and what not to Mr. Mori. If I had to do everything by myself, it would never get finished.

☆Taku Takahashi: Is that because you go over everything with a fine-tooth comb?

Shinichiro Watanabe: It’s not so much a personality issue. For example, an anime which has routine performances don’t require such precise facial expressions, however, I don’t want to do such routine performances. It’s necessary to check the details of the expressions. At this point, the director’s work increases and it becomes impossible to do it all alone. So I requested Mr. Hori to check the layout, the original pictures, and the color control. I am doing the editing, sound, and music.

☆Taku Takahashi: Yes, yes. I wanted to talk about those music discussions today. Originally, your work closely relates the music to the story, the theme of Carole & Tuesday is also rooted in music, but on the contrary, I’m surprised that there hasn’t been a work like this until now.

Shinichiro Watanabe: Of course, I’ve been a music freak for many years, so I thought that I’d like to do “something with music” someday. But on the other hand, I really enjoy music too much and tend to set a high hurdle for it. I’d tend to use music which is only appealing to myself (laughs). The other problem is, what I like, other people might not like. For example, deep Detroit techno wouldn’t translate well. However, it seems that the public’s taste in music has gradually progressed or synchronized and what is now selling in the mainstream is musically interesting. It makes me wonder if I can grow popularity by using music which suits my tastes or if it would result in a negative response. For many years, I was a maniac for music from indie labels, but recently indie music has been more conservative. Even club music seems like it’s only being done for people who enjoy that genre. Major artists now are starting to make more complex music. Simply put, if you were to listen to the Billboard top 20 right now, everyone is likely to find a few tracks which they would enjoy. This didn’t use to be the case. So, that’s what makes me think now is the right time to do something like “Carole & Tuesday”.

☆Taku Takahashi: For the music production, you collaborated with artists not only from Japan but from all over the world.

Shinichiro Watanabe: Various artists appear and a variety of songs were created. Basically, I have each of the creators take a look at the plans so they can get an understanding of the premise, and those that do understand, I end up working with. This way, everyone who is participating knows the content of the project. Each artist is different, but when you have a meeting in person, they can get a better understanding of the work.

☆Taku Takahashi: In regards to the music, is my understanding right that you order the songs for a specific case?

Shinichiro Watanabe: It’s really case by case. There are instances where the creator asks a question and we provide the response, but also on the adverse, there are cases where the creators sometimes say “I want to make a song like this” and they provide a reference.

☆Taku Takahashi: I heard that the audition for the two main characters was a global undertaking. I feel that this is a very fresh concept.

Shinichiro Watanabe: There was a point in time, around “Cowboy Bebop” where I thought that not many people abroad enjoyed anime yet. Now, 20 years later, “Carole & Tuesday” is going to be broadcast on the net at the same time as TV in over 160 countries. Rather than focusing just on Japanese fans, I’d like to compete in a worldwide playing field, a field where I can compete for the drama of the world. Kind of like, rather than becoming a slugger for the Hiroshima Carps, I want to be able to play in the major leagues.

☆Taku Takahashi: The world of “Carole & Tuesday” is set in the near future where all of the music is made by AI. However, the main characters Carole & Tuesday continue to make music the traditional way, with their hands. Was this always the concept?

Shinichiro Watanabe: The current real-world culture is slowly becoming a platform for analyzing what is popular and trying to re-create it. I wanted to show that same concept, but a bit distorted. I feel that I’m doing what I’m supposed to be doing when making this. I certainly think that AI will come to write novels, and it will slowly come to the point where it would be impossible to distinguish if a human wrote something or an AI. I suppose there could be a future where an AI wrote a novel similar to the kind that advertises themselves with an “All of America Cried” story as well. I think it will take time as the production process becomes more complicated for each novel, and music will join an era when AI will make music prior to the movies they’re for.

(Editor’s Note: “All of America Cried” is essentially an advertising tagline used to sell novels & other stories in Japan with the concept that the story was so moving that it impacted the American populous.)

☆Taku Takahashi: Regarding music, there are many urban legends. Such as “There are certain chord progressions that will guarantee a hit song”.

Shinichiro Watanabe: Music like that can be replaced. Is it going to become a system?

☆Taku Takahashi: But on the other hand, there is now a fusion of Indie and Major music which strikes a chord with you on the global charts, right?

Check back in a few weeks for the second part of this interview which touches on the wider scope of Mr. Watanabe’s work, and features some discussion regarding his upcoming Netflix projects.