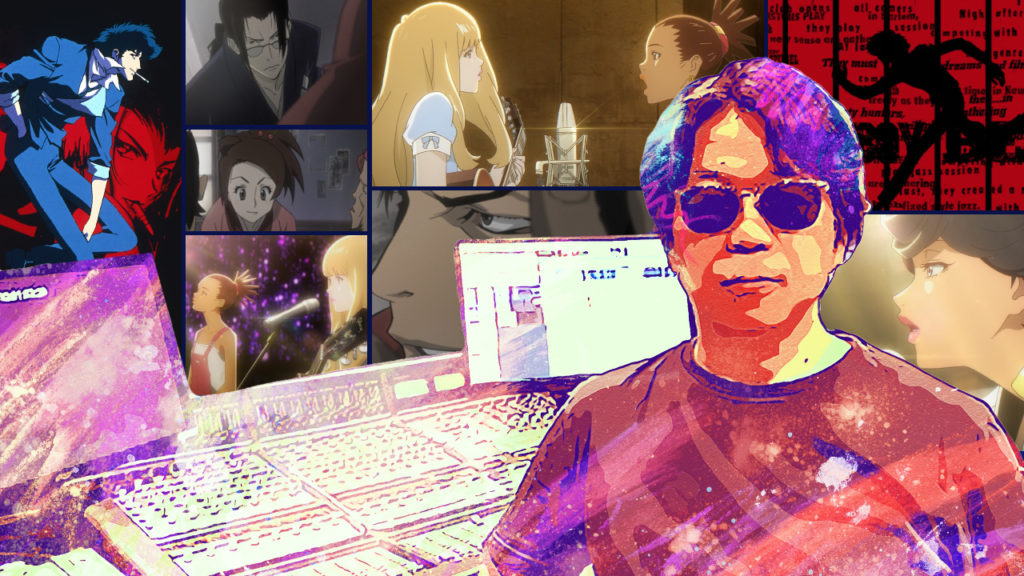 2019 has been a busy year for creator & director Shinichiro Watanabe. On top of the release of his latest original work, Carole and Tuesday, it was announced that Netflix is working on a live-action adaptation of his highly influential work, Cowboy Bebop, as well as a continuation of the Blade Runner animated short he created for Blade Runner 2049. In this second part of our exclusive interview between OTAQUEST co-founder ☆Taku Takahashi and Mr. Watanabe we learn more about his influences and feelings toward other works, as well as touch lightly on the upcoming projects mentioned previously.

☆Taku Takahashi: We’re going to change the topic here, “Cowboy Bebop” is having its 20 year anniversary, which is very exciting, even to fans in the United States. How does it feel as a director to have works which you made, beloved worldwide for so long?

Shinichiro Watanabe: I’m happy for it to have been loved for so long. But because I’ve made so many other good productions, I would like for you to see them as well (laughs). Since then, there have been only offers to make an anime similar to “Cowboy Bebop” even after so many years which could be quite difficult. However, it seems that it goes the same way for both anime and music or even anyone creating something for that matter, if you have a hit which resonates with the trend at the time, you’re going to be consistently asked to do it over and over. However, I don’t tend to make the same style of content repeatedly, I always want to do something new. Yellow Magic Orchestra (YMO) also has those same basic motivations. I am a child of YMO. I was influenced greatly in middle school and high school by YMO’s 2nd album “Solid State Survivor” which was a huge hit nationally. However, everyone was expecting their next album to be like “Solid State Survivor 2”, but they ignored the expectation with a smug face and kept saying “It’s different”. I really thought that the concept was cool. From that point on, I decided to challenge new things rather than reproduce the same thing repeatedly, with high quality each time as well. Each time YMO came out with an album, I couldn’t predict what the first song on the album would be at all, it would make me excited. So when it was my time to create something, I didn’t want to be the director doing something like “Bebop” each time, so I aimed to become a director who makes you wonder what they’ll make next. Suddenly, I was making things like historical dramas, youth-focused stories, comedies…I’ve done so many different things.

☆Taku Takahashi: Originally, it seems that you wanted to make live-action films.

Shinichiro Watanabe: It’s true that I was playing with the idea of creating either live-action or anime.

☆Taku Takahashi: I feel the importance of Pop Culture in your creations, especially in the industry. But was there influence from YMO there as well?

Shinichiro Watanabe: That’s something that I can’t say for sure, but there might be. On the album X∞Multiplies YMO included unexpected skits by Snakeman Show (a trio of Japanese comedians). I feel that the roots of being able to do something suddenly in the middle of the song like that is OK. Perhaps there might be an interesting connection or something like that for the origins.

☆Taku Takahashi: I understand not wanting to do things similar to “Solid State Survivor 2”, however, was there something that you were trying to express by ignoring the viewer’s desires, or were you aware of keeping a balance?

Shinichiro Watanabe: The first thing I would like to say is that I wasn’t ignoring users. I’m disappointed as a viewer if something I expected happens. It was the extreme viewer side of me that wanted to do something that went beyond expectations, so even if I had the opportunity to create something again, I would likely not do the same thing. Some people will say the opposite, and even if the user is the one speaking, you can’t hear both. Even if you do it, you won’t know exactly what to make. So I feel that creators have to make what they believe in.

☆Taku Takahashi:  I’d also like to discuss the animated version of “Blade Runner” which was announced recently. It seems that “Blade Runner: Black Lotus (Japanese Title Undecided)” is going to be taking place in the world of “Blade Runner 2049”, what kind of involvement do you have with this project?

Shinichiro Watanabe: The work on “Carole & Tuesday” was too hectic and I am only loosely involved in the new “Blade Runner” series (bitter smile). I provided my opinions on the early concept, but that’s about it. The directors are Kamiyama (Kenji) and Aramaki (Shinji), so I left my expectations with them.

☆Taku Takahashi: Is this the same with the live-action “Cowboy Bebop”?

Shinichiro Watanabe: That’s right. I read the initial concept and provided my opinions, but I’m not sure if they will be reflected in the final product.

☆Taku Takahashi: As the original creator, how would you feel if what you saw in the original scenario pitch and what was broadcasted differed?

Shinichiro Watanabe: That would leave a sour taste in my mouth. However, for example, when transitioning a manga to an anime, if the original author speaks out on various points, it makes the work for the anime staff and it won’t necessarily make it a good product. That’s why I have no choice but to pray and hope that it will turn out good (lol). Also, for “Cowboy Bebop” I don’t have any right to stop it. Those rights are in the hands of Sunrise, so if you have a complaint, please send it to them (lol),

☆Taku Takahashi: The motivation to keep making content. What kind of motivation is needed to challenge new things with various people, and what criteria are required to become involved in one of your projects?

Shinichiro Watanabe: Try as hard as possible to not have a pre-determined concept, if there is something “nice” which can be offered, age and career experience don’t really matter. This doesn’t only apply to full productions, but can also be applied to sketches on the internet.

☆Taku Takahashi: Do you have many people coming to you trying to pitch you their ideas?

Shinichiro Watanabe: No no, nothing like that. After all, Japanese people are fairly shy. There are starting to be more and more foreigners in the Japanese anime world and they’re the ones that have that feeling.

☆Taku Takahashi: I think It was in France, but Dai Sato said that he saw you riding to the club by bicycle.

☆Taku Takahashi: I’m really excited to see how your musical sense transfers to the production.

We hope you enjoyed this 2 part interview with one of our absolute favorite directors & creators in the anime industry. Be sure to read the first part of this interview as well in case you missed it. If you’re looking for more of Shinichiro Watanabe’s works, part 2 of Carole and Tuesday debuts on Netflix December 24th outside of Japan and many of his other works are available for streaming on Hulu and Funimation Now in the US!