Shinkalion – Evangelion For Train Lovers, But Not 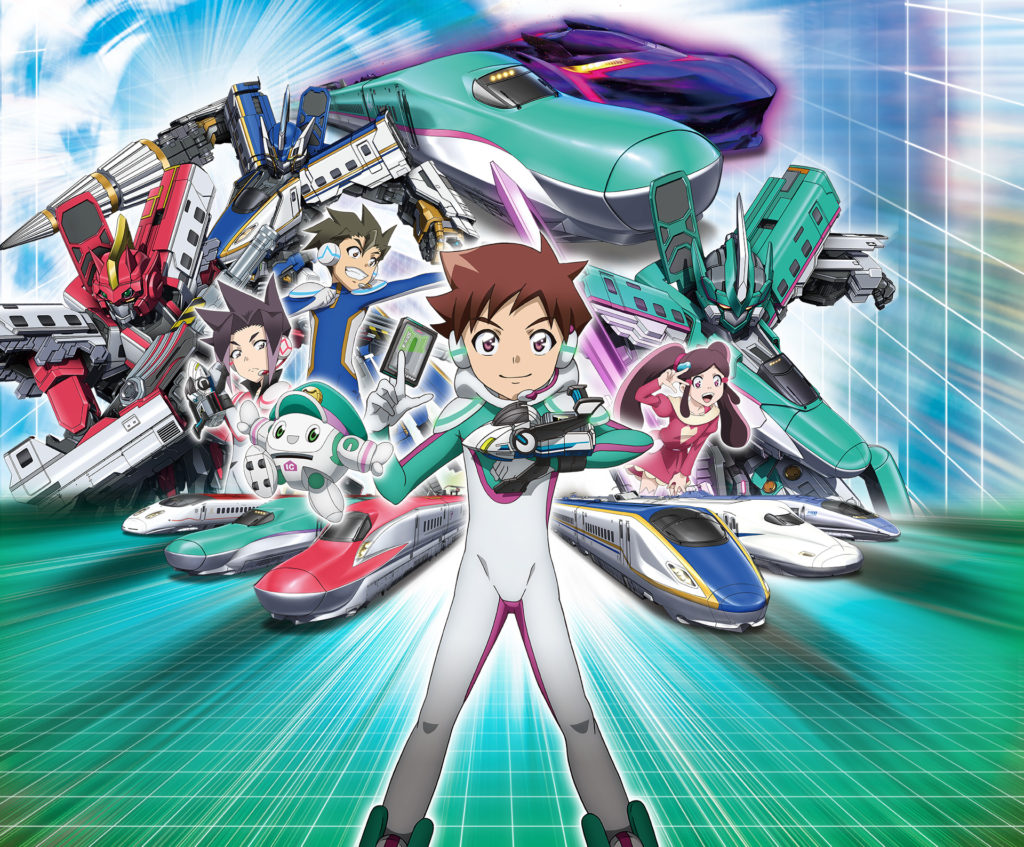 Where can I start with this? It’s got robots, it’s got trains, it’s got an Evangelion vibe. It was created in conjunction with the toy manufacturer Takara Tomy as well as the Japan Railways Group as a spin-off of the largely famous and expansive children’s toy line “Plarail”.

The full name for the title is “Shinkansen Henkei Robo Shinkalion” which translates to “Transforming Bullet Train Robot Shinkalion”. It was an anime that aired on JNN stations from January 6th, 2018 to June 29th, 2019 also winning the Best Award on Television Anime CG Category at the VFX-Japan Awards.

It also received an arcade game in 2018 as well which further led to its popularity among young children. Aside from these, it also received a film in December of 2019. Obviously, with all of these coming together there are also various amounts of merchandise available relating to the title.

A Story Spanning the Universe

The story of Shinkalion is one of the most intriguing aspects of the line because it’s not just limited to children. It’s got a dark tone to it at times and it’s got the happy-go-lucky feeling that many children’s animes have as well.

The story starts with the main character Hayato Hayasugi (lol this name, it literally means “too fast”) mistaking an app on his father’s tablet as a mobile game thus showing that he has an outstanding aptitude for piloting Shinkalions.

Because Hayato’s father was a staff member of the Railway Museum, he was a huge railfan and got sucked into the situation of recent attacks thus discovering his father’s secret as being part of the Shinkansen Ultra Evolution Institute. Against the will of the adult members of the top-secret team, Hayato joins other children using Shinkalions to fight against the foreboding threat of Kitoralzers.

The anime adaptation of the series takes place about half a year after the inevitable defeat of the Kitoralzers. A new threat appears from space being led by Nahane and Ohanefu with the plans to take over Earth.

While these attacks were happening, the Shinkansen Ultra Evolution Institute was busy developing a new prototype unit called “The Shinkalion ALFA-X”. All of the sudden, from a different dimension a 9-year-old Hokuto appears and the Shinkansen Ultra Evolution Institute employs him to pilot the Shinkalion ALFA-X uniting all of the teams across Japan as a final line of defense against the new threat on the planet.

Not too Shiny and Sparkly

The Shinkalion franchise might have been a newer anime/movie adaption, but it’s roots trace much further back. Specifically, back to 2012 when Takara Tomy unveiled the Tomica Hyper series.

During this time, PLARAIL sales were dwindling and on a downward spiral which ultimately led to their discontinuation in 2013. In order to revitalize the brand, Takara Tomy employed the assistance of the experts from the Japan Railways Group to breathe life into their new PLARAIL Hyper series.

The design for Shinkarion was inspired by the “Cho Tokkyu Hikarian” anime among others. They ultimately decided on a transforming robot which was based on the Shinkansen line of trains which is popular among adults and children alike.

The new project was unveiled at the 2014 Tokyo Toy Show under the codename “Project E5” complete with a special promotional animation produced in collaboration with the Japan Railways Group and Shogakukan.

After the initial presentation, the series went into full swing production with many changes happening to the concept to prepare it for release. The initial run of toys was released on March 16th, 2015.

The Shinkalion and Evangelion Crossover

On the 31st episode of the series, the 500 TYPE EVA Shinkansen revealed its Shinkalion transformation being piloted by none other than Shinji Ikari himself. There are other Evangelion character appearances such as Asuka and Rei.

All characters were voiced by their original voice actors as well. The episode wasn’t really much to phone home about but there are plenty of references to Evangelion and Shinji stating to Hayato that this is “His World” thus making me think that the crossover with Shinkalion is part of the canon Evangelion story.

Personally, I am a huge fan of trains and thoroughly enjoy riding them and seeing the different types of trains that we have here in Tokyo and throughout Japan.

If you’re a fan of anime of any type, especially the robot series of animes, I would strongly recommend checking out the Shinkalion series. It’s got amazing visuals, amazing action, and it’s a really unique experience. I highly doubt that you’d walk away from it with a negative impression. Aside from the occasional childish overtone, it’s a really well-done series and had me engaged from beginning to end!