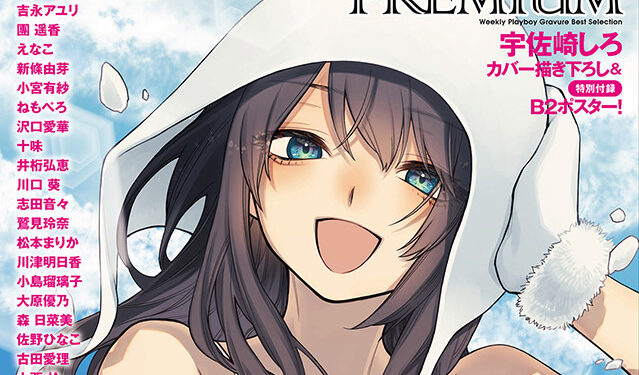 Waiting for a Shiro Usazaki manga is like waiting for a bus: you wait for ages, and then a bunch turn up at once. Ever since Act-Age came to a magnanimous end this August following the arrest of writer Tatsuya Matsuki, fans of the series, if not the entire manga industry, have been waiting patiently for the talented young artist to make her return. Now, it’s finally here: Shiro Usazaki has two new one-shots out this month, alongside a series of illustrations for Shueisha’s Weekly Playboy.

The first one-shot is undoubtedly the most exciting. Debuting on 21 December in the combined issue three and four of Weekly Shonen Jump, it will mark Shiro Usazaki’s return to the magazine that previously serialized Act-Age after a four-month absence. Titled Enen no Cyclops (Flame-Eyed Cyclops), the manga is based on a story by Osamu Ishikawa, a ‘former salaryman’ in the same rookie position that Usazaki was a couple of years ago.

What’s more, on 25 December, Usazaki will illustrate Yuuki Shasendou’s short story Kaiki (回樹) in the second 2021 edition of Hayakawa’s SF Magazine. The frontispiece was already shared via the website and Twitter, but it’s unknown if Usazaki has contributed any more illustrations. We’ll just have to wait and see.

As if that wasn’t enough, Usazaki also drew four different illustrations for a special edition of Weekly Playboy: a front cover, and three pull-out posters (on sale 28 December). This is a little closer to home for Usazaki, given that the magazine is published by Shueisha, but also because she has collaborated with them in the past: part of Act-Age’s first year anniversary celebrations involved featuring protagonist Yonagi Kei on the front cover.

As to why all of these separate Shiro Usazaki works are coming out now around the same time, it’s simply a matter of circumstance. In a now-deleted Fleet on Twitter, the artist said, ‘I’ve been working on a weekly schedule up until this point… There’s a time lag now, which is interesting.’ One has to assume this is what she was referring to when she said that she had projects in the pipeline.

On the whole, it’s good to see Usazaki back in the world of manga. While she also designed the cover for VTuber Kaf’s second album ‘Magic,’ that didn’t really feel like a proper comeback. This does. We wish her well and look forward to her future works.