The manga and anime TV series Food Wars!: Shokugeki No Soma does for cooking what Naruto does for ninjas.

You have a young man, Soma.  He wants to be the best at what he does — in this case, cooking.  He has many obstacles in his path, including rival students.

But he is brash, bold and he knows how to improvise.

Unlike Naruto, who seemed like a big, clumsy loser at first, Soma actually seems to know what he’s doing right from the start of the first chapter.

Of course, that doesn’t make things any easier for him. It just means he will have to face more difficult challenges throughout the series.

Despite it being about cooking, everything about this series screams shonen. Until it finished last year, it was part of Shueisha’s Weekly Shonen Jump.

In the first part of Food Wars!: Shokugeki No Soma, we meet Soma Yukihira.  His father, Joichiro, runs a restaurant.  Naturally, Soma wants to be a chef.

More importantly, he wants to surpass his father and become a better chef.

In the first chapter, Soma pulls off a neat cooking stunt, and it looks like he might be able to save the family restaurant.  But it’s all a bait-and-switch as his father closes the restaurant anyway.

Instead, Soma’s father enrolls him in the Totsuki Saryo Culinary Institute.  The school is elite and has a ridiculously low graduation rate.

Soma now has a new goal — to become the best student at the culinary school. 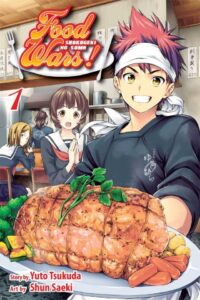 The “food wars” mentioned in the title are cooking competitions between the students — or sometimes between a student and an alumnus. These food battles are called shokugeki.

The shokugeki rules require something to be wagered.  Exactly what is at stake can vary — everything from knives to farmland has been wagered. But the items must be of equal value.

These battles take place in a special arena designed for food battles.  The basic idea is kind of similar to Iron Chef.

There’s a full kitchen available for each of the competitors to use, although they do bring their own ingredients. There’s also plenty of room for spectators to watch and provide their own running commentary.

All of these cooking battles have the same intensity as a martial arts battle.  It’s like a Dragon Ball tournament with food.

Chef’s knives are wielded menacingly. Food is prepared with vigor and passion. Cheering fans are shocked — shocked! — surprised and confused by some of Soma’s unorthodox cooking choices.

There are announcers and judges.

It’s clearly deliberately imitating other shonen series, and that adds to the fun of it.

There are also tournaments and other challenges for Soma to face.  Just to be granted admission to the Polaris Dormitory (also Polar Star Dormitory), Soma has to cook something great to prove that he’s worthy to be there.

It’s worth noting that some of the students are over-the-top all of the time. But the shokugeki food wars take it up to 11.

Generally speaking, the food looks great — but even food that tastes bad can look good in this series. Soma likes to experiment, and sometimes the experiments don’t go right.  But for the most part, his food is good.

We know that the food that Soma prepares is good because of the reactions people have when eating it.

Their expressions are almost sexual in nature.  Angels fly and flowers bloom. And we get some amazing visuals of what eating the food mentally feels like. (Soaking in a hot springs bath, for example.)

Female characters get to taste the food a lot, and the result is sometimes similar to a sexy-no-jutsu in Naruto. Yes, there is fanservice.

The Elite 10, or Council of Ten Masters, are the ten best student cooks at the academy.  They are extremely powerful. They control many aspects of school.

Members are selected by a review committee. The committee looks at a student’s grades, performance, and shokugeki.

Once on the council, members can challenge other members for a higher-ranking seat.

Non-members can even challenge a member through a shokugeki battle.  However, given the shokugeki wager rules and the power of the council, the stakes have to be very high.

Soma gains a seat on the council, and even reaches the 1st seat.

Shokugeki No Soma has a large cast list.  A few includes:

Soma Yukihira — He is 15 years old at the start of the series. He joins the school’s Polaris Dormitory. He later becomes part of the Elite 10.

He likes to experiment with dishes, and he can improvise.  Like many shonen heroes, he is brash and daring.  He has a dream, and he pushes himself toward it.

Erina Nakiri —  She is the granddaughter of the school’s dean, Senzaemon. Her family is rich.

She has the “God’s Tongue” (or “Divine Tongue”) and is extremely good at judging food.  She is a frequent antagonist for Soma.  She can’t stand him and is generally tsundere.

Megumi Tadokoro — She is Soma’s best friend.  She starts out at the bottom of the class but improves with Soma’s help.

She’s not bad, but she suffers from stage fright.  She needs the courage to do well.

Fumio Daimido — She is the leader of the Polaris Dorm. She is tough but caring.

Mito Ikumi — She specializes in meat.  She is a fanservice character, with a lot of bikini tops.

Satoshi Isshiki — Satoshi is an older student at Polaris Dorm.  He is a member of the Council of Ten.  He is very laid back and casual.

Food Wars!: Shokugeki No Soma began with a manga. The manga series started in 2012.

The anime series began in 2015 and is still ongoing.  The seasons are labeled First Plate, Second Plate, Third Plate, Fourth Plate, and Fifth Plate. There are also five OVAs, which take place between seasons.

The first season introduces the characters and gets them through training camp and the Karaage Wars story arc.

Season 2 deals with the Totsuki Autumn Election, the Stagiaire Arc, and the beginning of the Moon Banquet Festival Arc.

Season 3 starts with the Moon Banquet Festival Arc. It also includes the Central Arc. In the Central Arc, Azami Nakiri, Erina’s father, becomes the new head of the school.

Azami creates an organization to help him reform the school. The reforms are strict and demand exactness.

Erina flees to the Polaris Dorm.  The dorm is ordered to shut down, but it is allowed to stay open.

Season 4 deals with the aftermath of Azami becoming headmaster. It includes the Promotion Exams Arc.  Rebel students fight against Central and the Elite Ten.

The fifth season is the final season of the series.  It started in April of 2020.

The final chapter of the manga was published on June 17, 2019.  Chapter 315 was titled Shokugeki no Soma.

It is the conclusion to the final story arc. The story involves a criminal “dark chef” organization and an elite invitation-only cooking competition. In the last couple of chapters, all that is left is for Soma and Erina to battle.

In Chapter 315, it looks like Soma has finally gotten Erina to enjoy his cooking. Of course, she’s still too tsundere to admit it.

Spin-offs and a crossover

A light novel series, titled Shokugeki No Soma: a la carte, started in 2014.  There were three volumes between 2014 and 2015.  The novels are canon, but they feature characters other than Soma.

A spin-off manga, Shokugeki No Soma – L’etoile, ran from 2015 to 2019.  Kojiro Shinomiya is the main character. The manga is considered to be canon.

As the name implies, Present takes place immediately after the ending. Past tells about Soma’s father prior to the series.

Future takes place in the future.  An older Soma gets stopped at the airport for carrying knives.

In 2018, Food Wars! writer Yuto Tsukuda and illustrator Shun Saeki had a bit of fun with the One Piece spinoff Shokugeki No Sanji.

The one-shot manga featured Sanji, the tough chef of the Straw Hat Pirates.   In this one, he is still cooking at the Baratie.

There’s a difficult-to-please customer, and the style is a mixture of One Piece and Shokugeki No Soma action and humor.  Obviously, the story isn’t connected to the main story in any way.

The manga has a chef, Yuki Morisaki, on staff as a contributor.  Naturally, the series does have some realistic recipes.

The book begins with a recipe for “Roast Pork, Just Kidding,” the improvised dish featured in the first episode (also the first chapter of the manga).

The recipes are a mixture of Japanese and Western cooking.  For example, Eggs Benedict, Coq Au Vin, and Croque Monsieur are Western, Three Kinds of Onigiri is Japanese and Matcha Panna Cotta is a mixture of both.

Food Wars is available at Crunchyroll.  Crunchyroll notes that recent episodes of the fifth season have been delayed by the COVID-19 crisis.

Food Wars – Shokugeki no Soma: 5 Things You Need To Know

Shokugeki no Sanji: The ‘Food Wars!’ Duo Have Still Got It

Not Dead Yet: ‘Food Wars’ Gets Fourth Season This October

Fans Won’t Mourn the End of the ‘Food Wars’ Manga

Food Wars! Manga is Coming To An End This Month