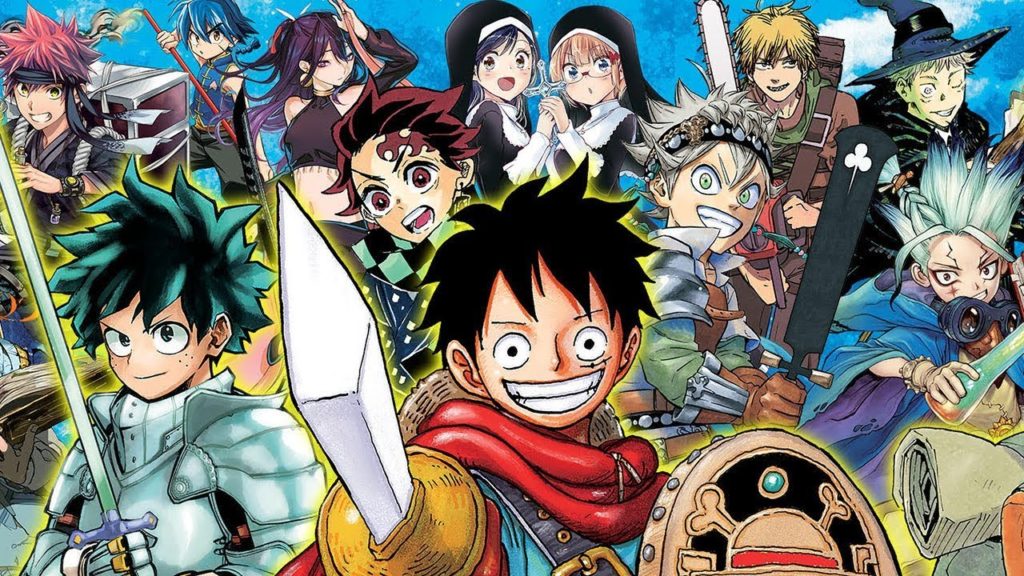 Shonen Jump is a magazine that compiles and publishes the latest chapters from ongoing shonen manga titles – comics marketed towards young boys ranging from 12 to 18 years old. The brand is owned by Japanese magazine publisher Shueisha and published in America by Viz Media, a subsidiary of Shueisha.

Weekly Shonen Jump is the primary edition of the publication in both Japan. It has been in circulation for over 50 years now (since 1968) on a weekly basis as the name implies, with new editions being released on Mondays unless there is a holiday or some other circumstance interfering with the normal run.

Aside from the weekly edition of the publication, other versions of Shonen Jump such as Monthly Shonen Jump, exist or have existed at one point in time. The Monthly edition, for example, was discontinued and replaced by Jump Square near the end of 2007.

The format of Shonen Jump in America has changed over the years. During the 00’ decade, it was a monthly publication featuring comparatively few chapters relative to the Japanese edition. In 2012, the print edition was canceled entirely and a digital-only version of Weekly Shonen Jump more in-line with the Japanese publication was made available on the internet.

At the end of 2018, Viz published its final digital issue of Weekly Shonen Jump in favor of converting to a digital archive with a more “on-demand” appeal. The latest two or so chapters are available for free under the new model, with the entire back catalog accessible at any time to subscribers.

What is the Most Popular Series to Appear in Shonen Jump?

Over its 50 year run, a laundry list of the world’s most popular manga, and by extension, anime has appeared in Shonen Jump. Every new season, additional anime shows based on manga (that is usually) concurrently running in Shonen Jump debut or continue for additional seasons. Due to the length of the average manga series’ run, the anime adaptation for all but the most popular of popular titles usually ends up abridged or sometimes features entirely different story arcs or scenarios in comparison with the original print manga.

One such massively popular Shonen Jump series that has made it all the way through an anime adaptation while remaining mostly similar to the content structure of the original manga is, of course, Akira Toriyama’s Dragon Ball (though it was split into two different anime runs, Dragon Ball and Dragon Ball Z), which is likely one of, if not the most well-known anime and manga titles of all time in terms of global recognition.

If we are talking about the Shonen Jump series that has sold the most copies, however, that honor goes to One Piece. One Piece is nearing a staggering 1000 chapters and has sold over 350 million since its inception in 1997, topped only by the big three kings of the Western comic world: Spiderman, Batman, and Superman. Not bad, considering all three have been around for substantially longer, right?

But who cares about popularity, there are more important things like power levels, right?

So Who is the Best There Ever Was?

From every corner of the internet come polls reader polls based on Shonen Jump manga that ask readers to rank characters based on different criteria, be it universal power level, attractiveness, or even merely popularity within a particular series.

The obsession with ranking anime and manga characters has clearly become a favorite pastime for fans to root and speculate about their favorites. So much in fact that there is a long-running series of video game titles based on the idea of having characters from Shonen Jump duke it out in the arena for the title of strongest.

For years, fans have been able to put their favorite Jump characters against each other, starting with Jump Super Stars for the Nintendo DS, which was succeeded by Jump Ultimate Stars.

The model is similar to that of Nintendo’s Smash Brothers franchise in the sense that the series is the ultimate crossover between characters in the Jump universe, though the gameplay has always differed. We’ve seen other crossovers, like Project X Zone and Playstation All-Stars Battle Royale emerge since, and Jump Stars Victory VS followed in the mid-2010s.

The newest title in the series, Jump Force, came around for Playstation 4, Xbone, and Windows PCs in 2019 as part of the celebration of Weekly Shonen Jump’s 50th year of publication.

Developed by Spike Chunsoft, and published by Bandai Namco as per the usual when it comes to video game rights involving Jump related intellectual properties, Jump Force features over 50 characters from a wide variety of Shonen Jump’s most prominent titles, once you account for all the DLC and additional characters added as a part of seasonal passes/

Other outlets have collaborated with Shonen Jump to celebrate its 50th anniversary as well. Japanese clothing chain Uniqlo, for example, released a special line of UT Collection Uniqlo T-shirts to commemorate the event, featuring some of Shonen Jump’s most popular characters and titles over the years.

The UT collection is Uniqlo’s line of graphic t-shirts that is reserved for collaborations with some of the hottest cultural trends in Japan and around the world. While it definitely is not unusual for Shonen Jump titles to be featured in the UT Collection, each collaborative run of the series is special in its own right.

The runs are limited, so if you missed out on the 50th-anniversary commemorative run, chances are you are out of luck. There will be countless runs featuring your favorite Shonen Jump characters in the future, however, for as long as there are new weekly chapters of your favorite mangas being produced.

As it is, the popularity of Shonen Jump has swelled in recent years as the rest of the world becomes fascinated with Japanese culture. Although the sales of the Weekly Shonen Jump print magazine have declined from their high in the 90s, the digital presence of the publication is stronger than ever and available to a much wider audience. Here’s to another 50 years, Shonen Jump!