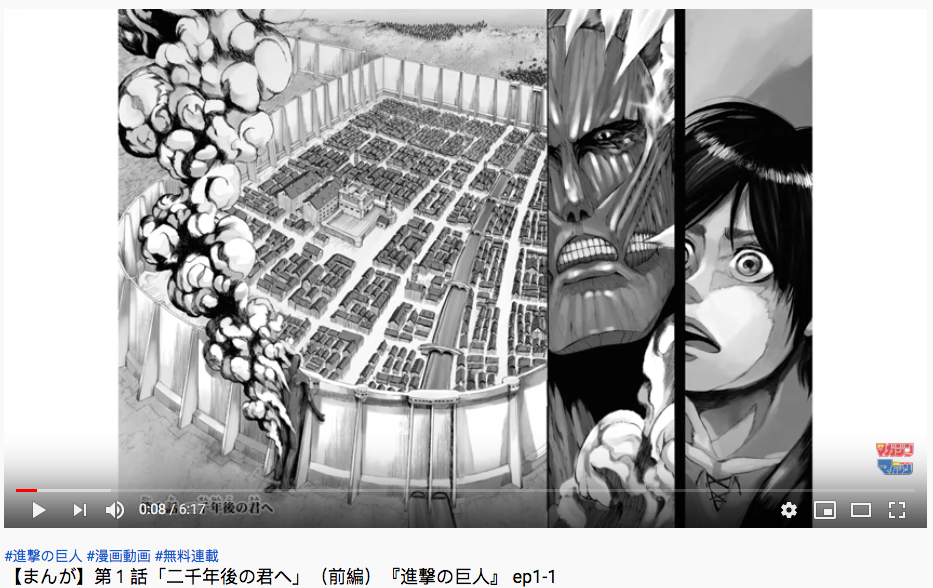 The first chapter of Attack on Titan was the first of the new manga videos to be put up.

The publishers stated that chapters of the sports manga Days will be added to YouTube on Tuesdays in November. That will be followed by the isekai series Tensei Shitara dai Nana Ouji Dattanode, Kimamani Majutsu o Kiwamemasu (I Was Reincarnated as the 7th Prince, So I Will Perfect My Magic) on Thursdays.

On Fridays, they will add chapters of the romantic comedy Soredemo Ayumu wa Yosetekuru (And So, Ayumu Advances).

They won’t post any manga videos over the weekend. The print edition of the magazine comes out on Wednesdays, so there will also be no manga videos on those days.

Of course, manga publishers are no strangers to YouTube.  Some companies post promo videos and other features fairly frequently.

Some of these are quite elaborate, such as the time when Inuyasha and Kagome did a video explaining Rumiko Takahashi’s MAO manga.

(Not to be outdone, Sesshomaru also narrated a promo video for MAO.)

However, complete chapters of manga get translated into YouTube format far less often.

In September, Weekly Shonen Magazine put up a YouTube version of just one chapter of the supernatural series Beast No. 6.

However, YouTube subscribers will get an almost daily manga video release this month.

The manga video idea is certainly an interesting concept. It may take a little getting used to.

For example, the first Attack on Titan video has no spoken dialogue and no voice actors.  You won’t get to hear Eren or Mikasa speak. (It’s undoubtedly cheaper that way.)

There’s not much in the way of sound effects, either. In other words, don’t expect an anime, radio play dramatization, or animated adaptation.

It does have plenty of dramatic music, however.  I suppose that the basic idea is to read the manga while you watch the video. You can always mute the music if it distracts you.

It’s considerably less animated than the YouTube video that Weekly Shonen Jump posted on Monday for Boku To Roboko.

Having said that, the four manga choices that Weekly Shonen Magazine selected are interesting.  Attack on Titan was a worldwide smash hit when it first came out, and it continues to be quite popular. So, it makes sense to have that be the first one.

Days won a Kodansha Manga Award in 2016. The series had an anime adaptation in 2016, which is still available on Crunchyroll.

Tensei Shitara dai Nana Ouji Dattanode, Kimamani Majutsu o Kiwamemasu (no relation to The 8th Son? Are You Kidding Me?) is a relatively recent addition to the crowded “isekai with long-winded titles” category. It hasn’t been adapted as an anime, but it hasn’t been around for that long.

Soredemo Ayumu wa Yosetekuru was created by Soichiro Yamamoto, the same guy who did Karakai Jozu no Takagi-san (Teasing Master Takagi-san).  I thought the anime for Takagi-san was quite good, and this manga seems to have similar vibes to it.

They haven’t made an anime version of the manga (yet). But a promo video featuring Yuka Iguchi and Hiroshi Yasumoto does give some idea of what one might sound like.

It’s not clear if the manga videos will continue into December.  Perhaps they will wait and see how popular the idea is.