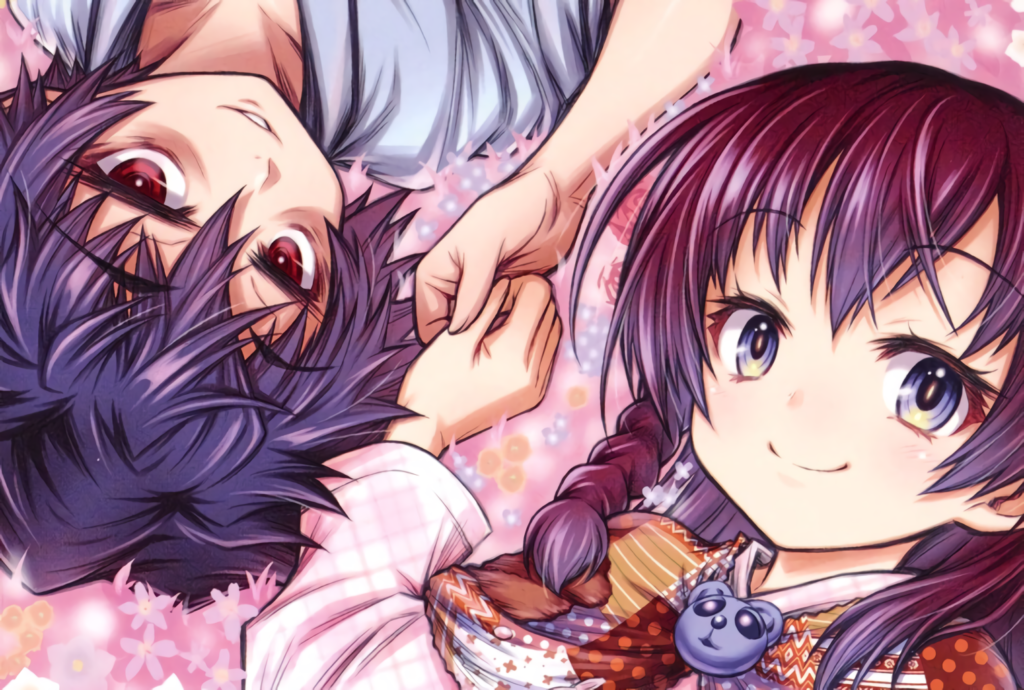 Considering how much manga gets released each month, it’s no surprise that some series get left by the wayside. Even so, I’ve always thought it was a shame that Nisio Isin and Akira Akatsuki’s Shounen Shoujo never got the attention it deserved, especially when considering how perfectly suited it seemed to be for the western anime community. 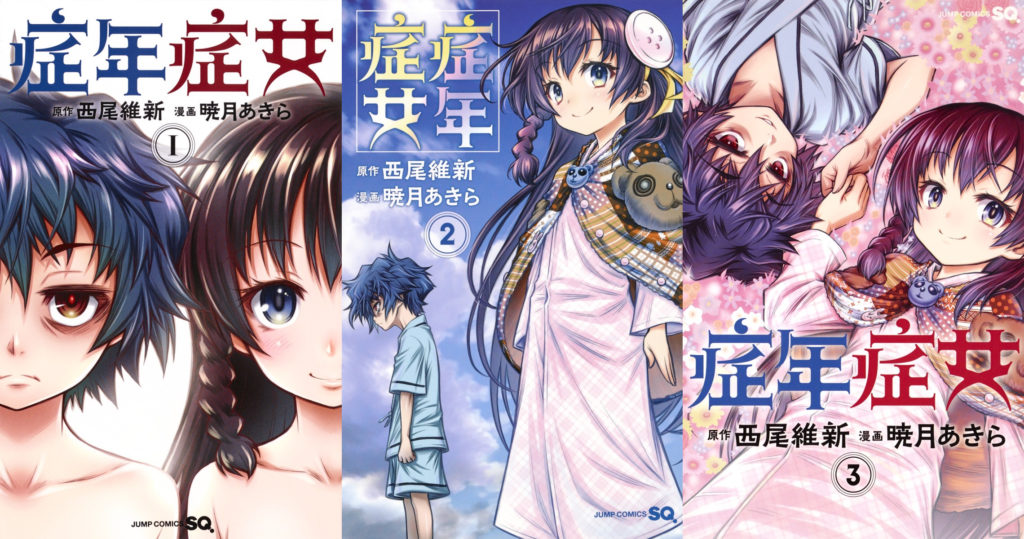 Shounen Shoujo (Ill Boy, Ill Girl) was published in Shueisha’s monthly magazine Jump SQ from 2015 to 2017, and saw author Nisio Isin and artist Akira Akatsuki team up to create yet another interesting series, not long after the subversive shonen masterpiece that was Medaka Box.

The series follows the story of ‘Shonen,’ a young boy afflicted with a terrible disease that makes him unable to perceive ‘individuality.’ One of the side effects of this is that he can’t see other peoples’ faces – instead appearing to him as if they’ve been scribbled out with black ink, along with their speech. 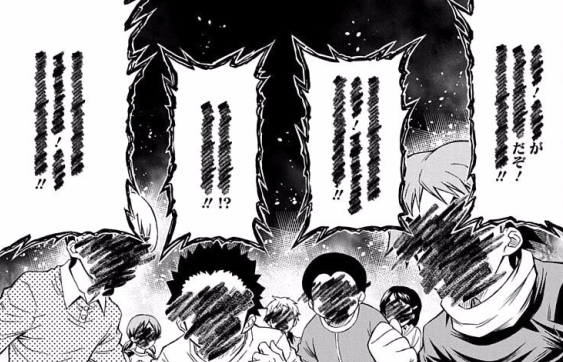 Following an incident at school, Shonen is taken to the hospital, where his disease is quickly discovered. And, as it turns out, Shonen isn’t alone: there’s actually another girl slightly older than him, known as ‘Shojo,’ who suffers from the same disease.

Shojo is almost the complete opposite of Shonen. She’s brilliant, charismatic, and incredibly intelligent, in stark contrast to the depressive, unremarkable personality that has deemed Shonen as an outcast for his entire life.

Yet, upon hearing his diagnosis, Shonen was thrilled. This is because another side effect of the disease is that the afflicted will die immediately upon reaching their 12th birthday, meaning that Shonen can sacrifice his life for science and be forever remembered as the first person to die from the disease, even perhaps getting himself named after the disease.

The only problem? Shojo is actually older than him and will reach her 12th birthday first. Shonen’s decision? Find a way to murder her in cold blood before she does so.

That’s certainly a lot of information to unpack for a premise, so don’t worry if you didn’t get all of it. It must be said that Shounen Shoujo isn’t exactly a light story; in fact, it feels a lot like the closest we’ll ever get to one of Nisio Isin’s novels in manga form.

Some people don’t like light novels or their style of storytelling, and that’s okay. Taken as a whole, they do tend to suffer from quantity over quality and can often go overboard with tropes and archetypes, so I totally understand. If you’re a die-hard light novel hater, then you probably won’t like this manga all that much.

The anime adaptation of Nisioisin Monogatari series by studio SHAFT has proven immensely popular both in Japan and the west for the past 10 years, and have pushed more and more people to the world of light novels and their unique brand of storytelling. As a result, Vertical Inc. has been able to continually translate and publish the Monogatari novels in English, along with Isin’s debut series Zaregoto and the fan-favorite Katanagatari.

For any fan of Isin and his works, there’s a lot to love here. Characters are often based around single traits, bending and warping archetypes to the extreme. Dialogue is punchy, oozing characters and often touching on deep philosophical subjects. Meta humor, of course, features heavily ,with characters frequently making references to the format and genre of manga.

When comparing Shounen Shoujo to Isin’s previous manga, Medaka Box, it becomes quite clear that this light novel-esque style of storytelling is quite deliberate on Isin’s part. Whereas that series felt more like a shonen series with an Isin spirit, it did rely on convention and didn’t quite lean into the weirdness; whereas Shounen Shoujo feels like Isin, through and through.

Don’t worry about Shounen Shoujo reading too much like a light novel, though. As much as he sticks by his light novel roots with this manga, it must be said that he does make some rather smart decisions to ensure that the story works better in manga form.

In general, Nisio Isin introduces some important structural changes that ensure the story stays focused, as distinct from his more free-form and long-winded light novels.

Firstly, there’s the fact that there’s an overall narrative goal for the protagonist, Shonen, to accomplish: killing Shojo. This ensures that each chapter stays on topic, and provides a central idea for the story to return to each chapter, as Shonen attempts to ensnare and kill Shojo in multiple different ways. 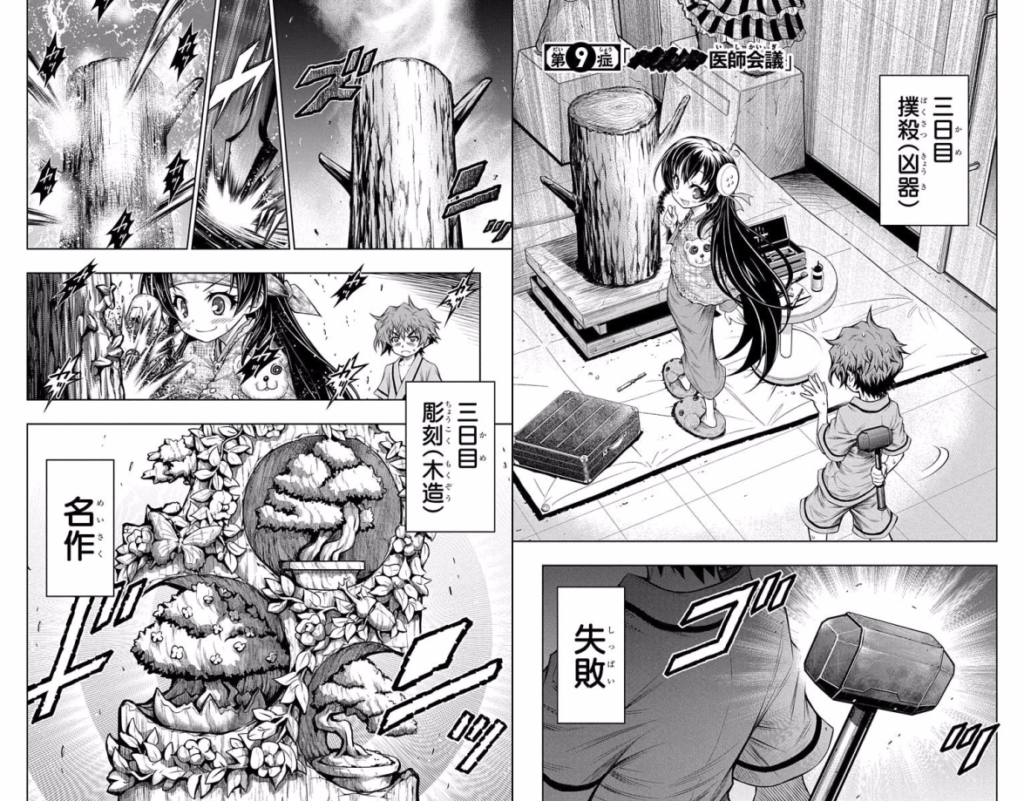 There’s also the fact that there’s a clear time limit on the story (Shojo’s birthday) that firms it up, giving it an almost cinematic feeling, especially when the series only spans three collected volumes, meaning that it could be easily consumed in a single sitting.

But those are all ways in which Nisio Isin makes changes to his own story to make it work better in manga form. How about Akira Akatsuki, who provides the all-important artwork for the story? Is he pulling his weight, despite being less well known than Isin?

The answer to those questions is yes; emphatically so. In fact, I’m convinced that, if any other artist was given this story instead of Akatsuki, it wouldn’t have turned out nearly as good as it eventually did.

To a certain extent, the fact that Akatsuki works well with Isin’s stories was already proven with the impressive, engaging and unique artwork throughout Medaka Box.

But, as stated, Isin’s storytelling for Shounen Shoujo relies less on convention, most likely due to the fact that it was serialized in the seinen magazine Jump SQ, and instead leans into his more abstract, detailed style of light novel storytelling.

What was needed here, then, was for Akira Akatsuki to also change up his artwork to better suit the different style of storytelling at play. That’s what leads me to disregard the fact that the character designs are quite eye-catching and unique; that the paneling is very efficient and effective; and that the art style is sufficiently dark and detailed.

What I’m more interested in highlighting here are the experimental touches that Akatsuki brings to the series, innovating with form and structure that truly demonstrates his own potential as a convention-busting artist, much like Nisio Isin.

One instance in the manga sees you turn from one page of fairly normal panels, only to be greeted with two double-page spreads of 12 different panels of character expressions, as Shonen and Shojo undergo psychological tests. 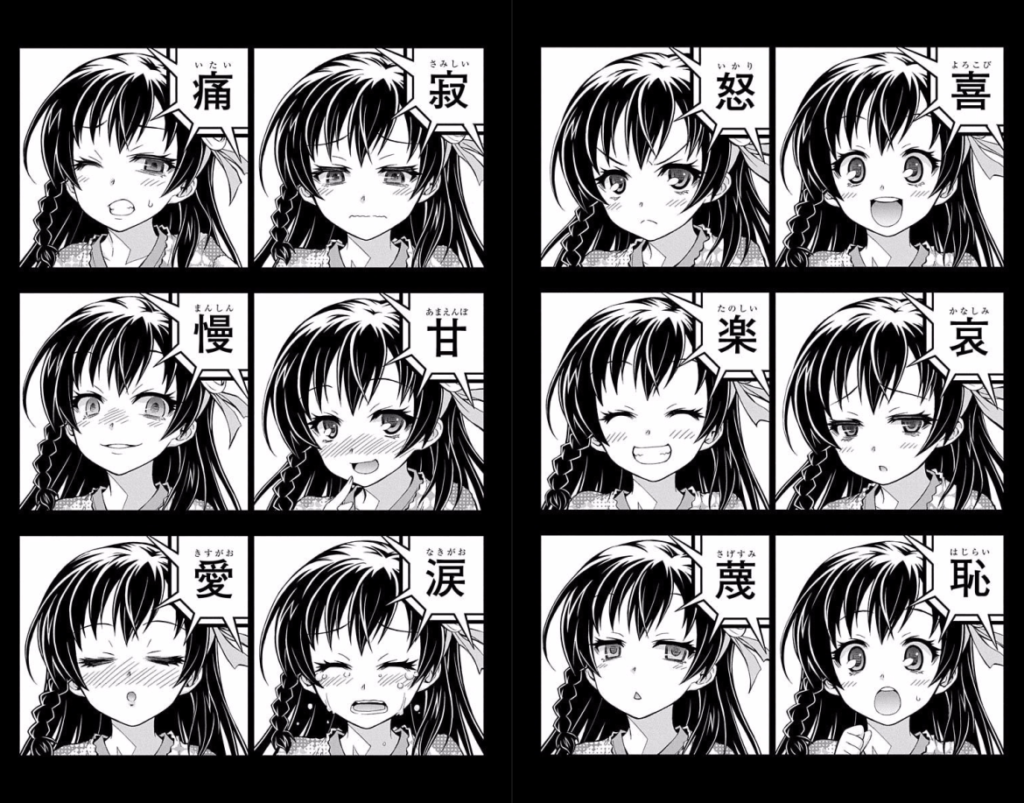 Going over the top with panel artwork is one thing, but how about this? At one point, Akatsuki draws an entire double-page spread of incredibly detailed artwork, only to block it entirely from view with black scribbles and dialogue- effectively making all of his hard work go to waste. 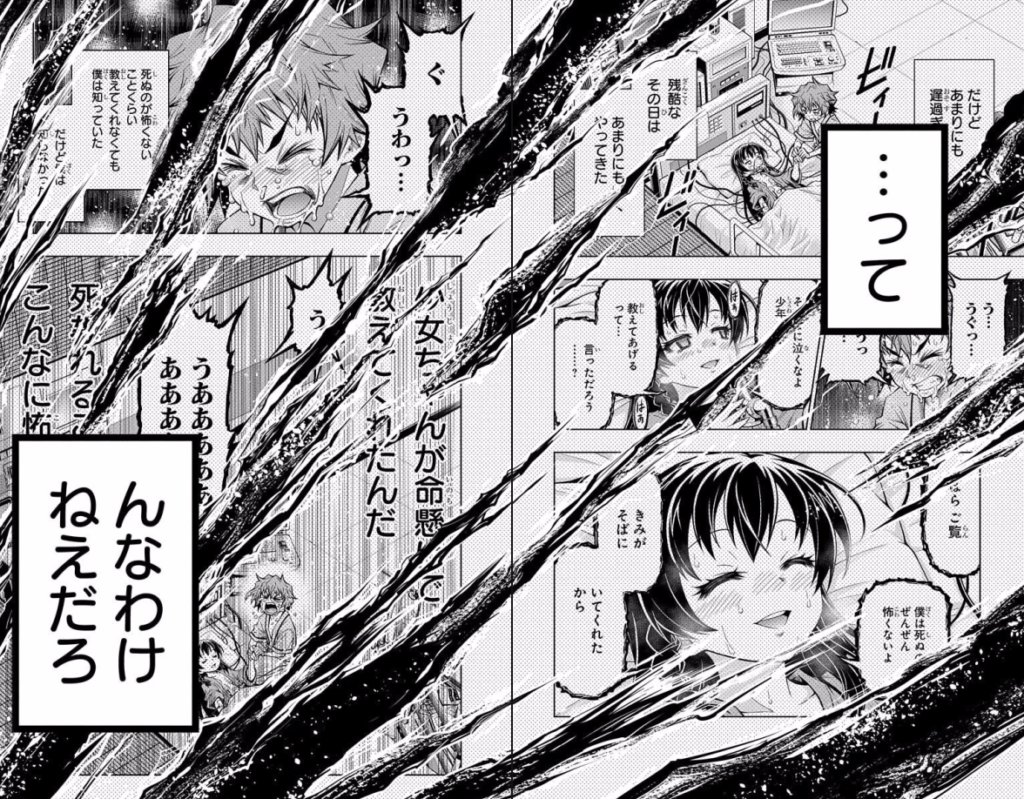 There are also several instances of mixed media in the manga that literally transcend the art form, such as when Shonen reads a book on how to kill someone and a picture book drawn by Shojo, or when the whole manga suddenly turns into a 4-koma.

That’s to say nothing, mind, of the fact that every character’s face apart from Shonen and Shojo’s is censored by black ink or a flowery collage, an impressive artistic flourish that continues to give the manga a unique visual style the entire way through.

Such brilliant artwork, taken to new, experimental heights from Akira Akatsuki, along with Nisio Isin’s engaging storytelling that should, for all intents and purposes, be attractive for western audiences is what makes me so sad that the whole world seems to have forgotten about Shounen Shoujo; even the illegal scanlators.

Discovering this manga in a bookshop in Japan while looking for the Medaka Box light novels was what set me down this path of sadness all the way back in 2017, and rereading the manga for this review has only put me in further despair.

The recent news that the Akatsuki/Isin partnership seemed to be dead, with Akatsuki going off with another author on BOXER’s BLAST and Isin teaming up with the Food Wars! creators for Jump Love Comedy Festival, doesn’t help much either.

While it is true that Akatsuki did collaborate with Isin once more in 2017 to adapt his Juni Taisen novel, this was not an original project but a manga adaptation, so I’m skeptical as to how much Isin was involved, even if it was pretty good.

Why did Shounen Shoujo never take off? If I had to take a guess, it’d probably just be the various circumstances surrounding the series.

For starters, I published it in Shueisha’s monthly Jump SQ magazine, which enjoys less circulation than Weekly Shonen Jump (where Medaka Box was previously serialized) because of its older, seinen readership. VIZ Media also hadn’t launched their new, free Shonen Jump service at that point, which probably limited its impact in the west.

Over in Japan, however, it is possible that the similarities between it and Medaka Box (Shonen is basically just Kumagawa) proved unappealing, or readers were simply turned off by the dense, light novel-esque storytelling within, the few readers that did pick it up during its run, that is.

In this sense, perhaps being in Weekly Shonen Jump would have improved its prospect. But, then again, Isin would have had to make significant changes in his story to do so. Blood and gore aside, the Jump editorial department doesn’t exactly want a manga about kids killing kids in their magazine meant for, well, kids. 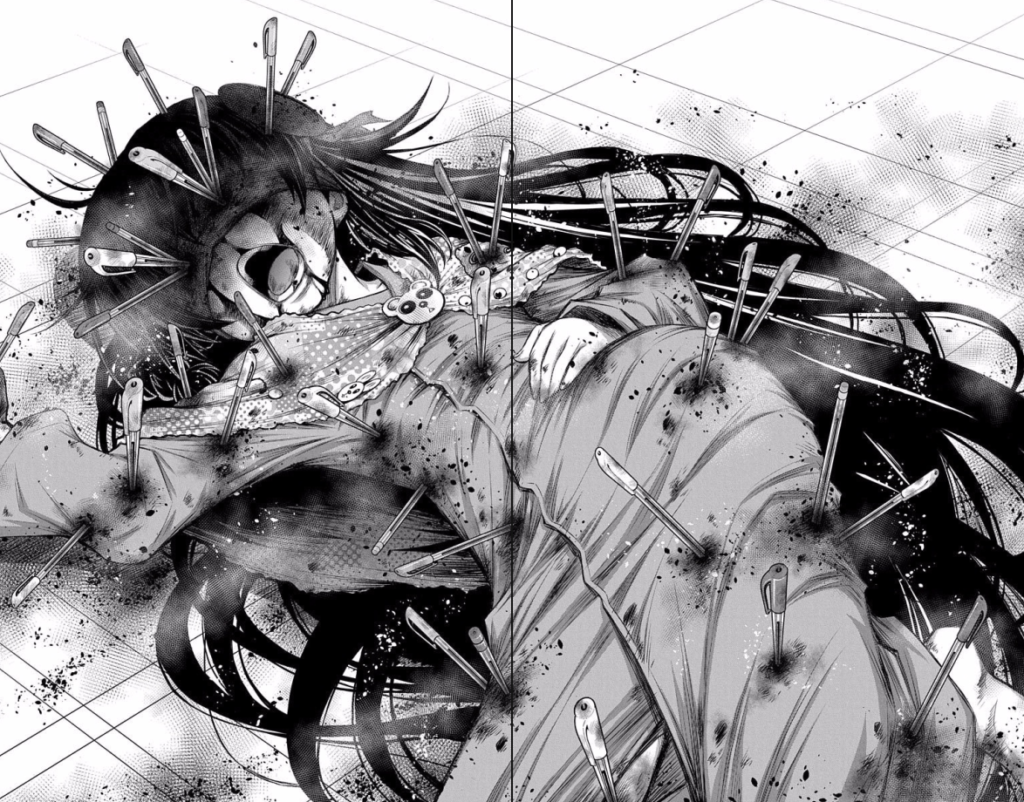 Not that my musings will make much of a difference now, though. If just one person reads this review and decides to pick the series up, I’ll be happy. Because if there’s one thing I can’t stand for, it’s the fact that Shounen Shoujo might forever be known as Nisio Isin’s forgotten manga.

All three volumes of Shounen Shoujo are available to purchase from Shueisha (Japanese only).