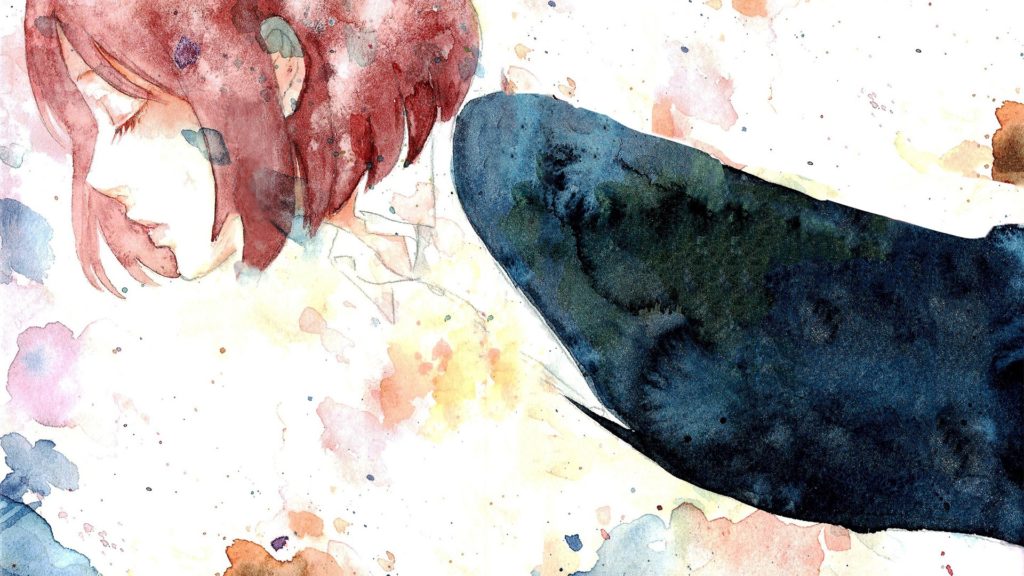 So many incredible manga burst onto the scene through the 2010s, either on their own accord or with some help from their popular anime adaptations. The two biggest series we can think of are unsurprisingly Attack On Titan and My Hero Academia, defining the first and second half of the decade. Other heavy hitters from the past ten years include Sui Ishida’s haunting and nuanced Tokyo Ghoul, One Punch Man which while needing no explanation features some truly incredible art by Yusuke Murata and the international rise in popularity of modern horror icon Junji Ito as a commodity. Aside from the last name mentioned, singular artists have put their all into each of their number one series. Not to say these comics aren’t accomplishments themselves but we went to celebrate an artist who put out a multitude of different works over these recent years that all successfully achieve something unique with each release. The first name that comes to mind when thinking who was bringing next level story-telling and artistic presentation to the table more than anyone else has to be Shuzo Oshimi.

Born in 1981 and debuting professionally in the early 2000s with a number of short series, Shuzo Oshimi has been building up his repertoire. Known for introspective, small in scale stories that tend to indulge in the less celebrated aspects of human nature, his comics have stricken a chord with a particular nuanced kind of reader; Those who are comfortable exploring the sad, the bleak, and the unsatisfactory in life and maybe getting some catharsis from its portrayal. You know, Evangelion fans. Out of early output, the closet thing Oshimi had to a hit was Drifting Net Cafe, which was a modernized take on the classic horror Drifting Classroom where a bunch of people in a net cafe get spirited away to some mysterious void with all hell breaking loose. That comic ran from 2008 to 2011 and while it’s worth a word, it’s what he’s created since that’s really left a mark on manga forever. 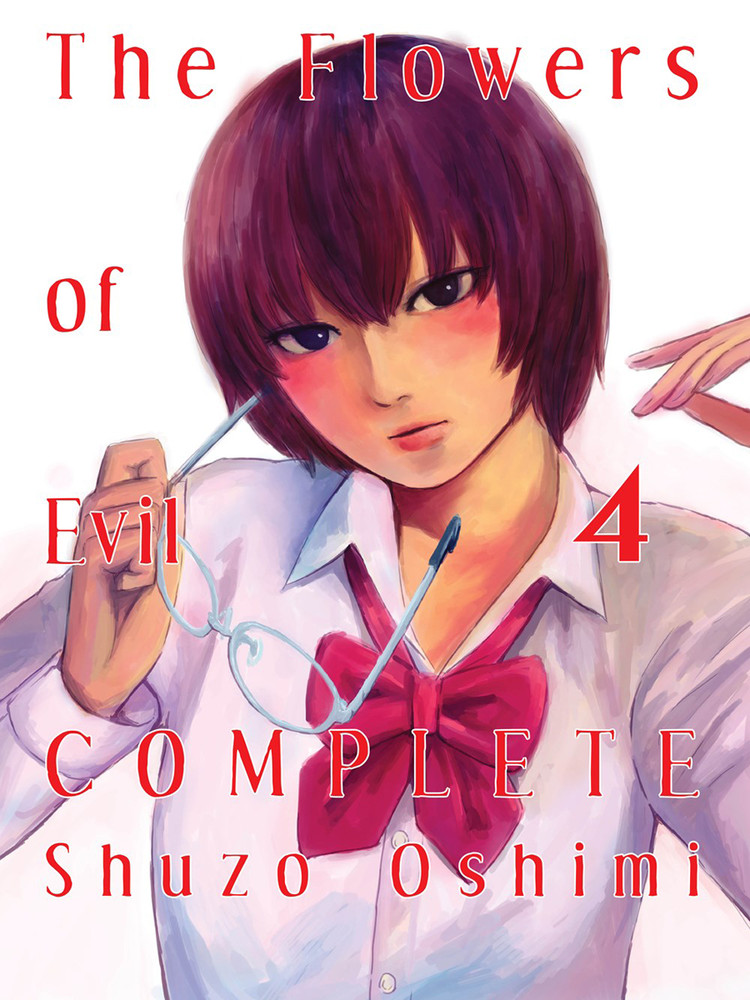 A controversial comic as any and the defining work of Shuzo Oshimi’s career thus far, The Flowers Of Evil requires us to start our retrospective with it. Also commonly referred to by its Japanese title Aku No Hana, they debuted in Kodansha’s Bessatsu Shonen Magazine the same day as Attack On Titan did meaning the two series ran side by side for years until Flowers finished up in 2014. On the surface, that juxtaposition seems asinine what with all the giant titans eating people, a far cry for the schoolyard debauchery Oshimi illustrated. However looking past the surface o these manga, two of the most representative of the decade, they share more than you would think like the onslaught of absolute despair and an overwhelming intensity in fighting it. Where Attack On Titan addresses this on a macro, societal scale The Flower Of Evil looks at despair as an individual phenomenon.

While we’re very pro the divisive roto-scoped anime and thought the Mari Okada scripted 2019 film adaptation did a good job of retaining the story’s signature essence, we’re here to talk about the comic. What happens when the awkward book loving kid gets caught stealing the popular girl’s gym clothes by the disagreeable, bordering on abusive class, weirdo? A tale of life, a tale of failure, and a tale of redemption. Even by the end of the comic you’re unsure whether the naive, thinks he’s smarter than everybody else because he reads a lot, Takao Kasuga getting wrapped up with the kinetic and destruct Sawa Nakamura is the best or the worst thing that’s ever happened to him. Shuzo Oshimi weaves so many potent threads throughout this story full of broken individuals trying to nurture each other, culminating in a slow burn equally cathartic and bitter-sweet. Other manga that are similar on the surface to Flowers have attained some popularity, like Scum’s Wish and Goodnight Pun Pun, but they don’t accomplish what Oshimi did narratively or artistically.

People who only saw the Aku No Hana anime have no idea about the second half of the comic, where a near soul-less Kasuga finally starts clawing back to life a few years after his time with Nakamura ended, with comic immediately shifting from fast-paced jab after jab to a purposeful claw. Oshimi trades in his digital illustration equipment and starts penning The Flowers Of Evil with paper and ink, spending the remaining five of eleven volumes gorgeously depicting a what’s really just a series of conversations. An early example, Kasuga eating a plate of Spaghetti with the girl he stole the gym clothes from after bumping into her on the street.  Shuzo Oshimi takes the time to savor the small moments like fine cinema; A panel close-up of pasta twirling around a fork as palpable tension hangs in the air, verbal evisceration looming in the background. We haven’t encountered any other manga artist in a long time who could make conversation alone so breathtaking. 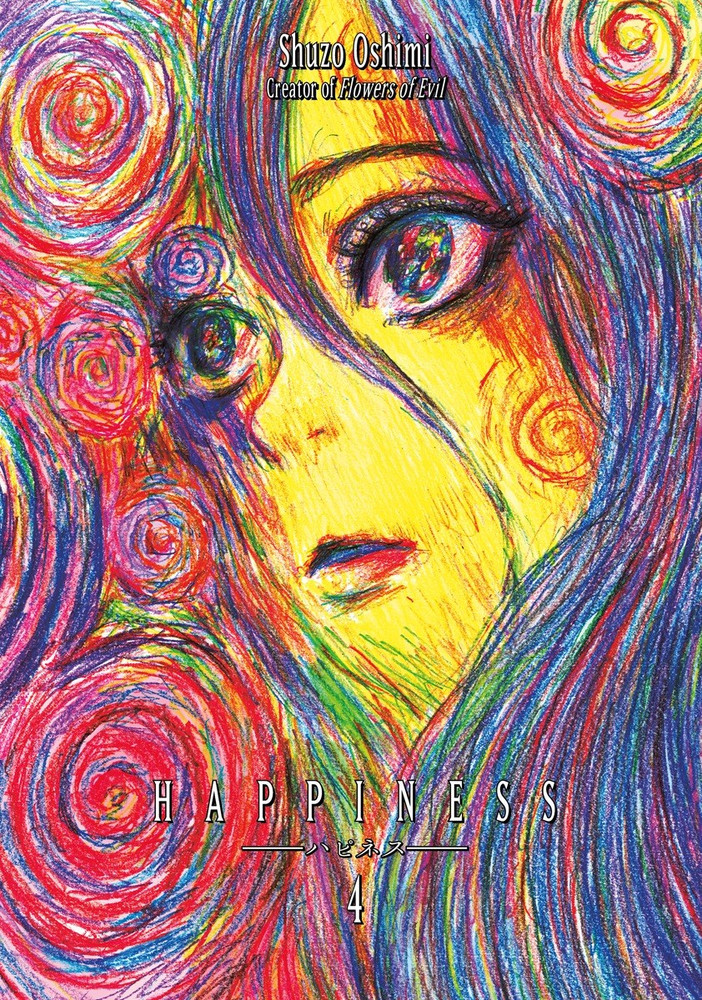 As The Flowers Of Evil continued, Oshimi becomes increasingly interested in experimenting with his art. Not only did he make the uncommon switch from digital to analog, but he also started rendering his backgrounds with more detail and really started to incorporate lighting in a heavy way. If you’ve read the very last chapter of Aku No Hana, you know Shuzo Oshimi was also interested in incorporating ‘alternative’ and ‘experimental’ art-styles not common in manga. He took his illustrative ambitions buddings in The Flowers Of Evil and allowed them to fully bloom in Happiness which launched in the same Bessatsu Shonen Magazine after Flowers finished up. Instead of trying to describe what the drawings looked like, just cite the above volume cover as a taste. It gets absolutely bonkers

What’s most incredible about the visual presentation in Happiness is how seamlessly Shuzo Oshimi switches from these lavish, gorgeously illustrated dreamlike city-spaces into abstraction. A modern urban vampire story not afraid to showcase how grotesque vampires would actually have to be, Oshimi cranks up his pen game in concept and in execution to 11. As characters lose their sanity, feel extreme fear, or perhaps feed on a human, Oshimi contorts and abstracts them into truly unsettling figures. Its a purposefully stark contrast to the rest of the manga, picturesque and radiant. A lot of the vampiric outbursts are coded for sexuality, adding an additional level of nuance to the comic and the art. Whether or not Oshimi’s art is your particular style or not, you can’t deny that Happiness is one of the most ambitious manga of the decade in terms of its illustrations. 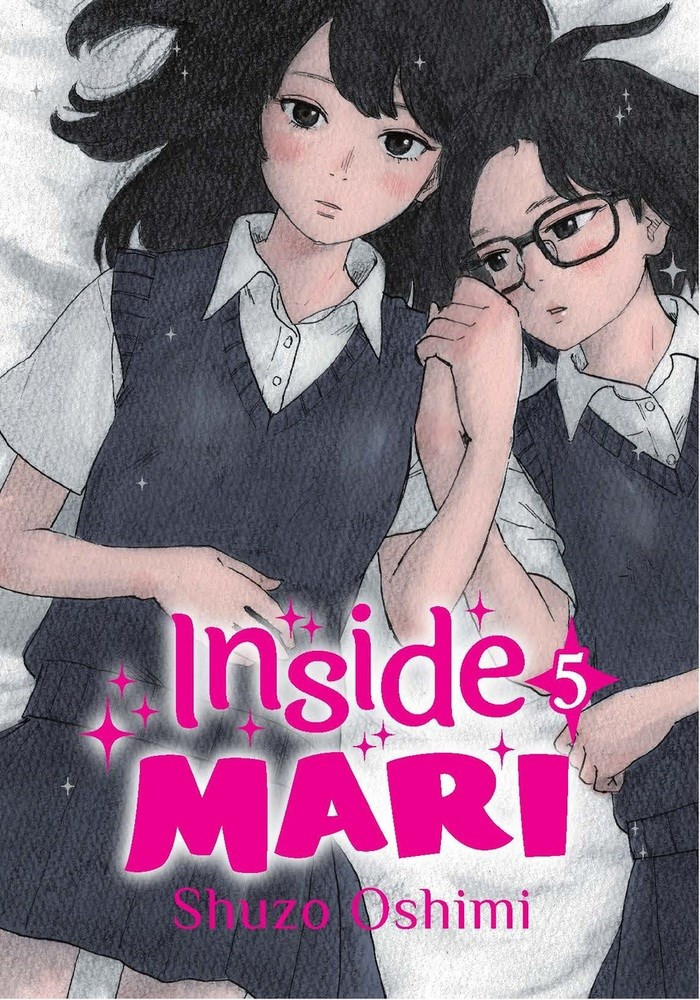 The last manga we want to look at today, Inside Mari ran from 2012 to 2016 meaning Shuzo Oshimi worked on it will also creating The Flowers of Evil and Happiness. It’s not uncommon for monthly manga artists to do more than one series at months, although Inside Mari was definitely Oshimi’s B-Side manga. The comic didn’t push illustrative boundaries like Happiness nor did it resonate with the hearts of the depressed like Flowers, but we have to give this creator credit for trying to breach some uncommon ground with its subject material. Born from his own feelings about at times wanting to be a woman and the advent of post-pubescent sexuality, a theme common in many of his works, Inside Mari saw Oshimi wrestle with gender in a novel way.

Last week we ran an article on the seminal Wandering Son by Shimura Takako, perhaps the go-to manga dealing with issues trans people commonly face. In this piece, its writer Alicia cited the story was absolutely instrumental to her though admittedly there are some flaws in how it addresses some of its material, especially by today’s standards. Inside Mari suffers from a similar conundrum and while we certainly wouldn’t call it a defining or active piece of queer manga, it’s prescient in some of its gender observations regardless. It’s a story where a young man one day wakes up in the body of a high school girl who he wasn’t friends with but secretly kept tabs on as she worked in his local convenience store. Obviously there’s a lot of room for error here, but as the lead starts playing the part of Mari he begins to actively change, disgusted by much of his past behavior. Shuzo Oshimi doesn’t identify as trans and we want to make clear that unlike Wandering Son, Inside Mari doesn’t purport to have that perspective. However, it’s a work that did come from internal gender conflict, from someone who excels at putting our secretive feelings and impulses to paper.

Shuzo Oshimi has become something of a notable since The Flowers Of Evil found success. Calling his works an acquired taste would be an understatement but if you like comics that make you feel bad and confront yourself, he’s your guy. It’s not just the uncomfortable parts of human nature he continuously depicts, its how he laws them out. Oshimi’s slinging around one of the best pen games in the medium right now and the longer he goes on, the less interested he is in phoning it in. He’s currently serializing Blood On The Tracks, set to come out in English next month, a story about a particular mother and son relationship. Continuing to pursue nuanced topics creatively with the narrative and artistic vision to do them justice, we have to applaud him as the most provocative and challenging manga artist working today. We can’t wait to see what he brings to the 2020s.

Kodansha USA, who just wrapped up an English edition of Happiness, will start releasing Blood On The Tracks next month. The Flowers of Evil is available from Vertical and Denpa Books is publishing Inside Mari.