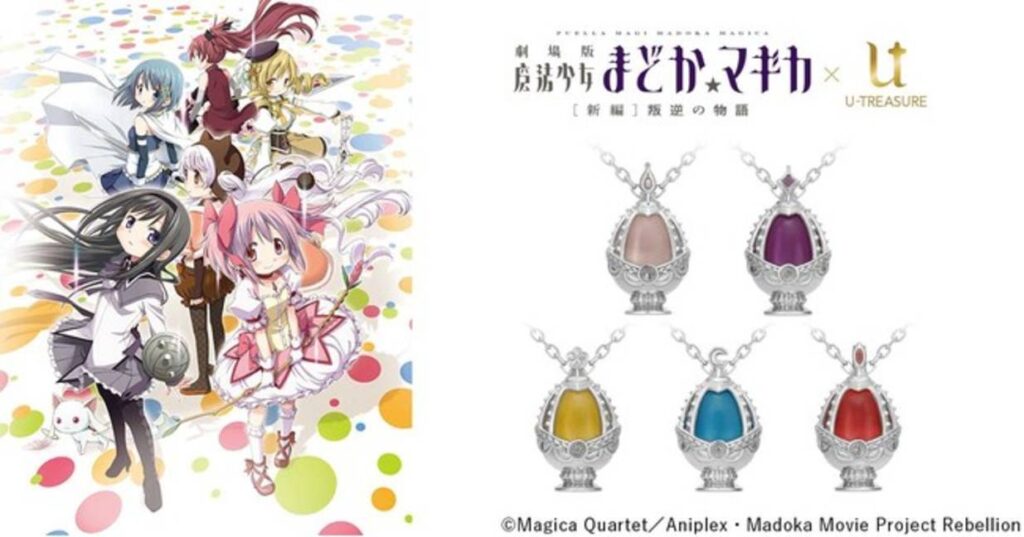 Would you like to form a contract with me? Just as the Puella Magi Madoka Magica series celebrates its 10th anniversary, UTreasure are coming out with a soul gem necklace.

With Madoka Magica now celebrating its 10th anniversary this year (in fact, today is the day the first episode aired on Japanese TV ten years ago), this upcoming year plans to be a celebration of this seminal magical girl anime with new announcements planned over the next twelve months. One of the most recognizable symbols in the series are the Soul Gems, the source of magical power for the magical girls after forming a contract with Kyubey. UTreasure are set to offer the opportunity to own a Soul Gem without a questionable contract from a shady magical cat.

The Soul Gems on offer are being sold in the form of premium necklaces, making them a little smaller than they appear in the show. Each Soul Gem is based on the Puella Magi Madoka Magica Rebellion movie for each of the main characters in the original cast. Five Gems will be available in total, one each for Madoka, Homura, Sayaka, Mami, and Kyoko. Each Gem is differentiated not just by the color of the gem but the more intricate, minor details that accurately reflect how their respective Soul Gems appear in the movie.

Two variants of these Soul Gems will be sold by UTreasure, but don’t expect either of them to come cheap. It will be possible to buy these necklaces in a silver version for 17600 yen, or the more expensive 10-karat yellow gold version for a substantial 44000 yen asking price.

While they aren’t cheap, they are very pretty and can act as a subtle way to showcase your love for the franchise and your favorite character. Pre-orders for the necklaces go on sale today at UTreasure’s official website.

Kamen Rider Ryuki Was More Than A Kids Show