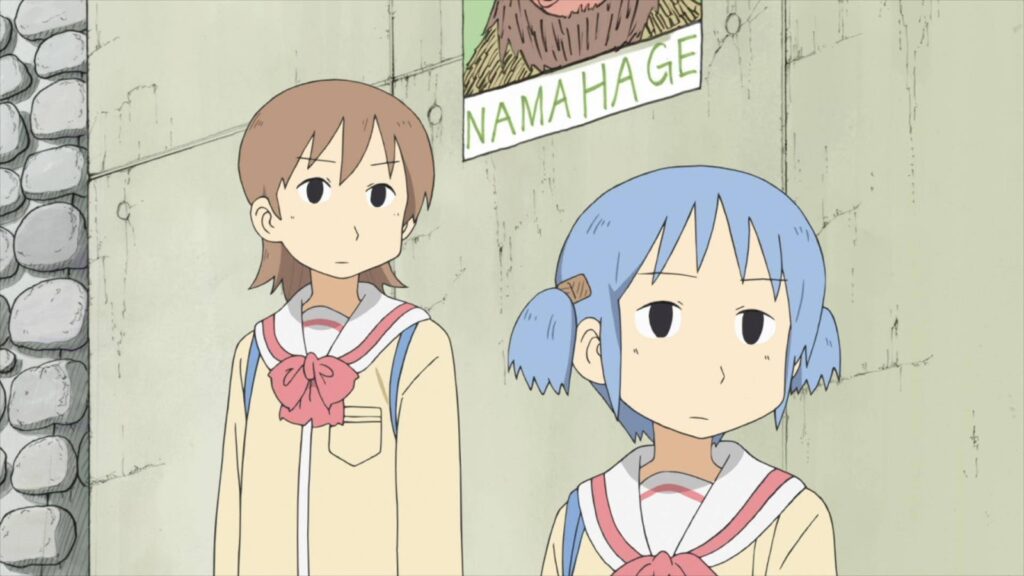 Nichijou is a silly and surreal manga and anime series with an unexpectedly large heart.

The series is also known as My Ordinary Life.  But there’s nothing ordinary about it.

It all sounds simple enough.  The series focuses on three ordinary high school girls.  They’re best friends.  They joke around, goof off and struggle with the daily routine of school.

Mio Naganohara is the serious one with a large, unresolved crush. Yuuko (sometimes spelled Yukko or Yuko) Aioi is the class clown. Mai Minakami looks serious and quiet, but she’s actually remarkably good at trolling the other two.

And then the robot shows up.  Nano Shinonome would probably look like an ordinary girl if she didn’t have a giant, wind-up key sticking out of her back.

Nano was created by a little girl.  Fan websites sometimes presume that the girl’s name is Hakase, but official subtitles call her Professor, the literal translation.  She always wears a lab coat which is slightly too large for her.

Nano desperately wants to be a normal teenage girl.  She’s embarrassed by her key, and is afraid of being found out. At the beginning of the series, she’s both the responsible grown-up in the Shinonome household, and the daughter.

Hakase would be the cutest thing ever, but she has a lot of competition in this show. She is, on the one hand, obviously genius-level smart. On the other hand, she is undeniably a child. 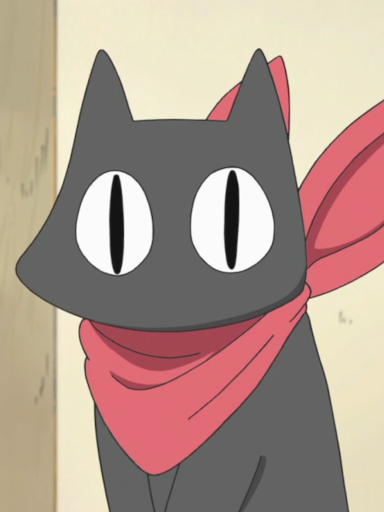 She constantly “upgrades” Nano with various absurd weaponry and hidden gadgets, ranging from a bean-firing machine gun to baumkuchen, which pops out of her arm.  She also invents a scarf which allows their black cat to talk.

This cat insists on being called Sakamoto-san (or “Mr. Sakamoto” in some translations), with emphasis on the “san” part.  Sakamoto-san is an adult cat, which makes him older than the other two, and he attempts to act like a father figure.

Of course, he is also still just a cat.  He is distracted by the usual cat stuff, and the girls can’t resist playing games with him.

In the anime, the three main girls don’t meet Nano until about halfway through the series.

The students at school seem to be aware that she is a robot, but nobody wants to say anything. She is unaware that the others know, so she’s trying to hide it.  The main three try to find proof, but fail.

It’s worth noting that Nano isn’t even the funniest, silliest or weirdest thing about this series.  One episode features a wrestling match between the principal and a deer. In another one, the girls wait out a storm at a shrine, and the miscellaneous mishaps which happen — which are not even remotely their fault — nearly wreck the building.

In one episode, Mio and Yuuko are trying to build a house of cards.  They carefully avoid potential disaster after disaster, only to have a ceiling lamp fall on the table, flattening the cards.

In another episode, the girls end up trapped in a stuck elevator.  Even trapped in a hopeless situation, Yuuko, Mai and Mio continue to play games, make dumb jokes and finally seem to go mad with laughter.  (This isn’t the end, and the story continues as if nothing happened.)

Besides the four main characters, there are quite a few other oddballs in Nichijou.

Kojiro Sasahara claims to come from a wealthy family, and he puts on airs.  He actually comes from a family of farmers — land equals wealth in his mind.  He rides a goat.

Mio has a crush on Sasahara. Meanwhile, Misato Tachibana seems to have a subtle tsundere crush on him.  She can’t stand his attitude, and shoots him frequently with large firearms from a seemingly-infinite hyperspace arsenal.

Then there is the Go-Soccer Club, which plays the fictional sport of Go Soccer.  The club initially has two members, Kenzaburou Daiku and Yuria Sekiguchi.

Daiku created the club, thinking it made for a silly, nonsensical combination.  Then he is shocked to find that the sport actually exists. Sekiguchi falls in love with Daiku, but he doesn’t realize it.

Anything too silly, too weird or just not appropriate for the high school setting ends up in Helvetica Standard.

Helvetica Standard is apparently a manga within the world of Nichijou, and its animated adaptation serves as a space-filler for the main anime.  One of the better gags involves a grim reaper who is unaware that his appearance is frightening.

There are other oddball little bits and pieces, such as the story of the Fey Kingdom.  The tale involves a power struggle between King Albert, the evil, traitorous Dolph and the cruel Princess Starla.

Ultimately, the whole purpose of the Fey Kingdom arc is to show where Mio got the little wooden cubes in her pigtailed hair.

When the series is not being silly or funny, it has slow-moving moments of quiet reflection and calm.  Yuuko seems to be fond of haiku.

The series can be quite touching when it wants to be. In episode 25, Mio’s crush on Sakamoto finally does get resolved, although not in a good way.

Mio spots Sasahara and Misato walking together, with Misato holding his arm.  It’s a long story, and it’s not at all romantic. But Mio misinterprets it as having lost her chance to confess to him.

She runs off, with Yuuko desperately following after her. There are several silly gags as she keeps running.  Finally, she dives into the local river, and manages to rescue a drowning boy in the process.

Finally Mio has time to reflect on what has just happened, and concludes that it’s all fun and “you never know what’s going to happen.”

Later on, Yuuko, Nano and Mai try to cheer Mio up, who still seems to be unhappy about Sasahara.  They set up a fake little lottery stand, and have Mio win a prize.

The prize is a coupon for a life-long friendship.

The series could have ended there, but there’s one more episode left.  The final episode focuses on Nano, who has a birthday party.  In the end, she decides to keep the key in her back; with friends like Mio, Yuuko and Mai, her life is normal enough.

Incidentally, Sasahara gets the best philosophical line in the whole series, as he ponders if “our everyday lives may, in fact, be a series of miracles…”

That “our everyday lives” line is a title drop; but it also seems to summarize the philosophy of the entire series.  Miraculous coincidences happen all over the place in Nichijou.

A lot of what happens could be described as odd, strange or weird, but there is a certain logic to it.  Some of the best gags come from taking an ordinary situation (school, family, friends, etc.) and exaggerating it just enough that it becomes absurd. The only thing we can do is laugh at it.

Nichijou started out as a manga by Keiichi Arawi.  It began in 2006 and continued until 2015.  The manga is very similar to the anime.

Kyoto Animation adapted it into an anime TV series in 2011.  There are 26 episodes, plus an OVA.  The OVA is called Nichijou Episode 0. Although the episode is called “zero” and it came out before the rest of the series aired,  it seems to take place later in the series.

There is also a video game, Nichijou: Uchuujin.   In the game, the player is the producer of the television series. As the producer, the player has to add unusual and weird stuff to the show in order to keep ratings high.  This would actually explain a lot about the series.

The video game was released to PlayStation Portable in 2011.

The series was on Crunchyroll, but it was removed.  It is currently available at Funimation.  However, the Funimation version doesn’t include the Episode 0 OVA.

You can get Nichijou: My Ordinary Life – The Complete Series on Blu-ray at Amazon.