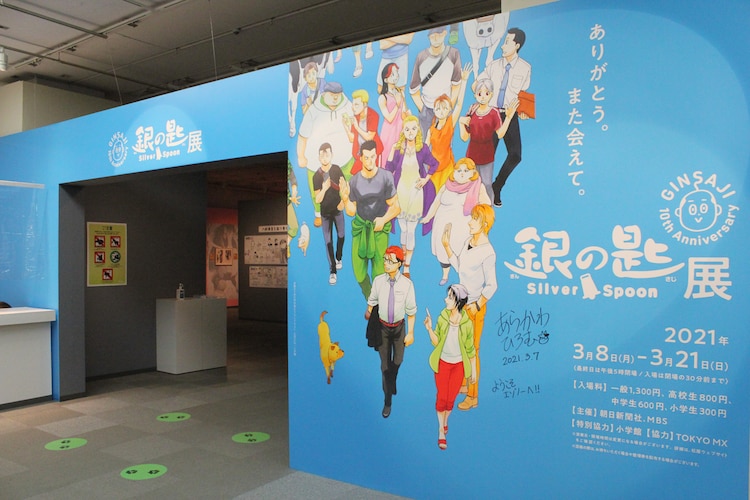 In celebration of the 10th anniversary of the Silver Spoon series, a new exhibition has launched today at Matsuya Ginza in Tokyo, with event expected to run until 21 March.

We previously covered the event’s initial announcement back in January, with the event promising that around 200 pieces of Hiromu Arakawa’s original artwork, including manuscripts, would be showcased to the public for the first time in the series’ history.

At the time, however, details on the event were relatively sparse, with little to bring up about the event other than its existence. Now, however, with the event open to the public, we have photographs alongside a range of exclusive merchandise for attending fans to dig their teeth into.

Entering through an archway emblazoned with the artwork for the event, iconic scenes from the series can be found throughout. In some cases, original paper manuscripts have been framed and placed along the walls to coincide with the seasons of the year, while elsewhere the artwork has been blown up to massive proportions to dominate the area, as seen with the art of Hachiken leaning on a hay bale. Every character and major moment from the now-concluded series is being celebrated here.

Of course, merchandise is an inevitable part of these events, and the items available are at least worth noting. The expected art book is probably the most eye-catching inclusion that lets you collect and chronicle all the art showcased at the exhibit, along with a DVD showcasing Hiromu Arakawa creating the key visual for the exhibit. On the high end, signed artwork is available for an eye-watering 55,000 yen, with everything from stickers to cutlery to mugs and more being also being available. Some items fit with the theme of the series too, as can be seen with the lavender herbal tea or a plush toy of the pig from the series.

The Silver Spoon 10th Anniversary exhibition runs until 21 March. You can find out more over on the official website.

Why You Should Watch Fullmetal Alchemist (2003): The Forgotten Adaptation – OTAQUEST Selects #2