Slayers Was DND The Anime Before DND Became ‘Cool’ 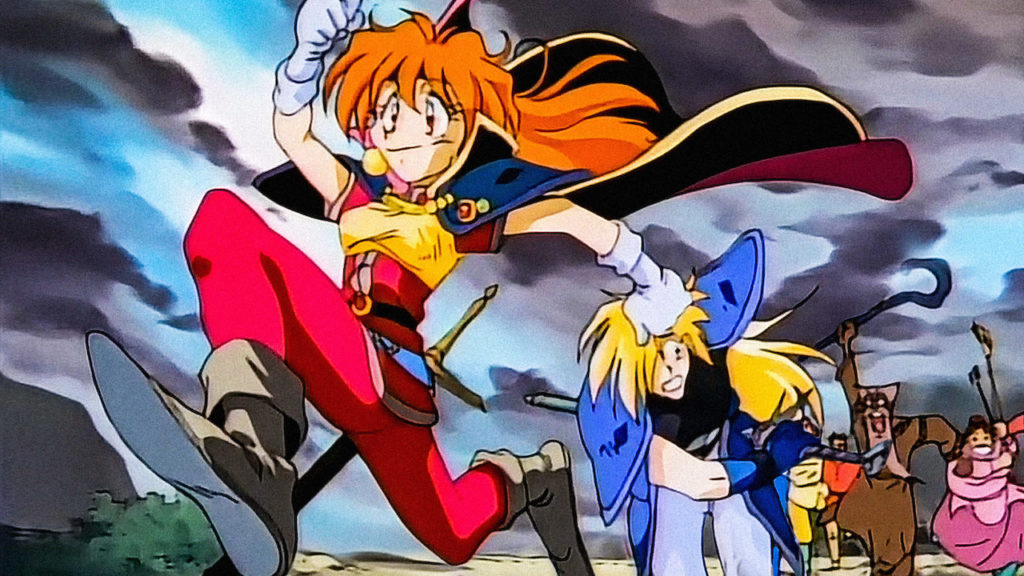 Long before Stranger Things and Game Of Thrones made the likes of Dungeons and Dragons as well as the fantasy genre ‘cool’, Slayers was running circles around anime fans since the 90s. Unlike modern fantasy anime, the vast majority of which being Isekai shows, Slayers was a true blue swords and sorcery cartoon that wore its nerdy lineage on its sleeve.

What, Slayers apart from other fantasy titles from its time like Record Of Lodoss War though is its obnoxious and colorful cast of characters like its iconic lead Lina Inverse who is generally more concerned with chowing down on rare foods than saving the world from evil mages and the like.

Originally based on light novels entries in Dragon Magazine by writer Hajime Kanzaka and illustrator Rui Araizumi, the sorceress Lina Universe would make her debut in many anime and manga to follow.

A Quick Guide To All The Slayers Anime

There’s a lot of Slayers anime out there and considering they all have secondary titles instead of numeric entries, it can be a bit of a headache. Especially since some are TV series and some are movies despite having the same naming conventions. Here’s a quick breakdown of what’s what in the Slayers canon. As a quick note, all the films and OVAs except Slayers Premium take place well before the series starts although you don’t have to watch them to start the TV show.

Known as Slayers The Book Of Spells in America, the first OVA series chronicles three separate Lina and Naga adventures. It never gets too serious.

Slayers Excellent was more of the same as Slayers Special and finished its three-episode run in 1999 making it the last piece of the original swath of Slayers anime.

There are a handful of Slayers movies that detail the early adventures of sorceress supreme Lina Inverse and the equally talented and obnoxious Naga The Serpent. Aside from Slayers Premium which features the TV characters, these films can be watched in any order without any prior context from the series or each other.

Titled Slayers Perfect in Japan, the first movie outing with Lina and Naga came out all the way back in 1995. The young but deadly magic users aim to take a relaxing hot springs vacation but when they get to their destination all hell breaks loose. Demons, reptile creatures, and other oddities get in the way of Lina’s good time.

And boy did they! Slayers Return brought the girls back to theaters in 1996. This time around they visit a town named Stoner, no we won’t be making any jokes, where a legendary artifact made from Orihalcon is said to be. Long story short, they end up having to fight a giant golem composed of that very material.

Another year passes, another Slayers film in Japanese theaters. 1997 saw Lina Inverse and her most annoying friend Naga in Slayers Great end up fighting a gigantic Golem who looks like Naga. Once again taking place in the town of Stoner, we guess the awkwardly named city was a popular tourist destination amongst fictional magical users.

1998 would be the last year to feature a full-length Slayers Film. Lina Inverse and Naga The Serpent ended up on opposite sides of a small-time war in Slayers Gorgeous being fought between a lord and his daughter over a weekly allowance. Of course, there was a secret baddie manipulating tensions from behind the scenes, and of course, Lina kicks his butt.

More of a bonus than an actual film but still a theatrical release, Slayers Premium brought the TV characters together for a short adventure 5 years after Slayers Try had ended.

With the many series Slayers has under its name, even just keeping the many anime series straight can be a challenge.

The original Slayers tv anime still has a ton of charm and heart. As the 1995 series went on, you couldn’t help to grow more attached to Lina, Gourry, and the rest. The hunt for the Claire Bible and the Truth behind Rezzo The Red Priest serve as good story fodder too.

Perhaps the best of the Slayers franchise, the 1996 Slayers Next was when the series really started to carry more weight. With the introduction of the mysterious Xellos into the mix and the double threats of Hellmaster Phibrizzo and Gaav, stakes were genuinely higher this time around. It’s opening song ‘Give A Reason’ is a certified Anison Karaoke Classic.

The final series of the original Slayer TV runs,  Slayers featured Lina, Gourry, Zelgadis, and Amelia continuing on their light-hearted magical adventures. Things start taking a heavier turn when the season’s big bad Valgaav, who had served under the previous season’s Gaav, makes his move.

The big comeback season for Slayers! Its first TV series in over ten years, Slayers Revolution featured an original story by series Light Novel author Hajime Kanizaka. While not badly received, Slayers Revolution didn’t kickstart an entire new era for The Slayers and fans were happy to at least see Lina and Co. return.

Basically just a season two of Slayers Revolution that had a season or so break time after the first finished airing.

Slayers originally started out as a light novel series by Hajime Kanzaka. That means the many anime adaptations and the plethora of manga runs over the years are retellings and spin-offs of the original books.

While hardcore Slayers fans who just want MORE Lina and Gourry would enjoy reading the manga, in our opinion they don’t really offer much that the very enjoyable anime adaptation doesn’t.

We’d understand wanting to read the original novel series over the anime, but again we only recommend the manga for the most hardcore fans. Besides, any English edition of the comic is long out of print so you’d have trouble reading it if you wanted to.

One thing about Slayers that sets it apart from oodles of other fantasy anime out there is its humor. You wouldn’t call it a comedy series but or a fantasy show, it’s pretty light-hearted most of the time. Much of that humor comes from its colorful cast of characters who don’t tend to take their numerous life or death situations all too seriously until they enter S tier demon lord territory. Here’s a quick overview of your four main traveling companions in the Slayers universe.

The ‘Dragon Spooker’ herself, Lina Inverse is an extremely powerful teenaged sorceress who’s not afraid to use her talents to get what she wants. As she journeys around with Gourry and the gang, she defeats powerful after increasingly powerful bad-guy often without a scratch. She’s spunky and not one to hold back from arguments nor does she indulge in modesty. Voiced by the all-time great Megumi Hayashibara in Japanese, Lina Inverse is truly a legendary anime character.

She’ll dip into Black Magic or sling out a Dragon Slave when she has to.

Lina’s right-hand man and the owner of the mythical ‘Sword of Light’. Our talented swordsman, Gourry Gabriev, might have the intelligence of a tree stump but he’s as a defendable fighter as they come. Simple, trustworthy, and shares Lina’s never diminishing appetite, after an adjustment period getting to know one another the pair is something of a dream team.

The two keep finding excuses to travel together but somebody they’ll realize what they mean to one another. Slayers get sappy too often though.

Despite his striking outer appearances, Zelgadis is as human as Lina and Gourry. Cursed by Rezo The Red Priest, an early big bad in the series, the normally reserved and solitary Zelgadis begins traveling with Lina and co to find a cure for his condition.

Despite the freakish look though, the curse has its advantages; His skin’s hard as a rock and from time to time it has its advantages in battle. As any hardened anime characters, his cold exterior slowly but surely starts to slip as the seasons roll on.

Another idiot, though not quite as mindless as Gourry, you could call Amelia comic relief. In reality though despite some occasional foolishness, she’s actually the princess of Seyruun which isn’t as big a spoiler as it sounds. Also like Gourry, she’s much kinder than Lina and Zelgadis and often acts as the moral center for the group.

While not as powerful as Lina, she does hold her own as a sorceress with her signature ice arrow attack. Rumor has it that she has an older sister who ran away from home a while back.