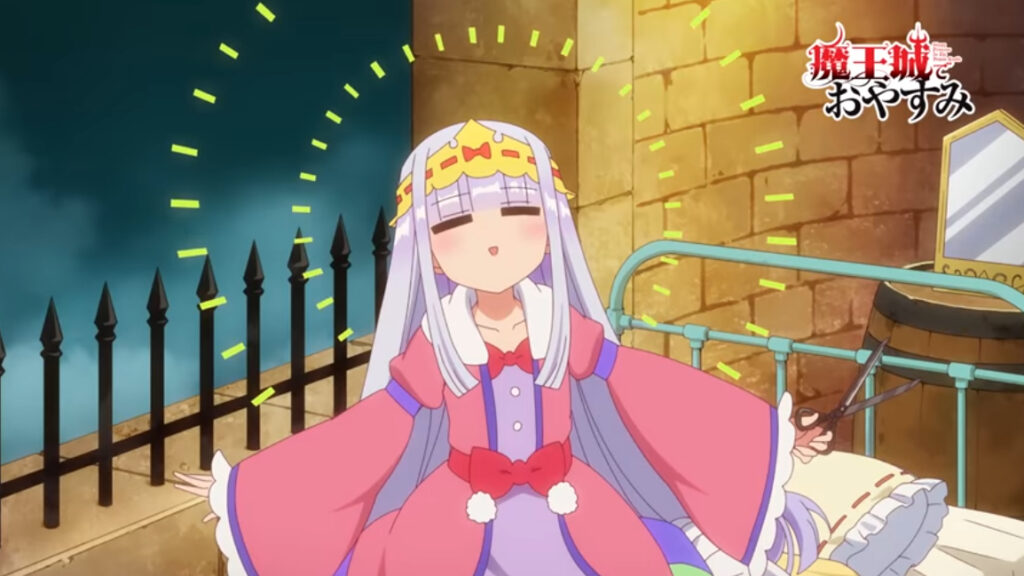 A new promo for the TV anime series Sleepy Princess in the Demon Castle was posted this week, and the show looks adorable.

The series features Inori Minase as the titular fairy tale princess, who just wants to get some sleep.

(Warning: Despite the scary-looking thumbnail image, the following video link is packed with sugar.)

The song title can be translated as “Good Sleep! Sleep Well! Syalist Life.” Syalist (or possibly spelled Suyalist) would appear to be a made-up word referencing Princess Syalis, the heroine of the show.

Another promo for the series was posted in July.

So, What’s Going On Here?

Sleepy Princess in the Demon Castle is an anime adaptation of a manga, Maoujou de Oyasumi.   The manga was picked up by Viz for an English language translation, and you can get a free sample of the cuteness here.

The story takes place in a fairy tale fantasy world. Princess Syalis was kidnapped by a demon king.

Naturally, a hero will arise to rescue the princess.  But, in the meantime, the princess just wants to get some sleep.

Unfortunately, she has insomnia.  Much of the comedy in the series stems from her extreme attempts at making things just right for a good sleep.

In the manga, she is also apparently stronger and/ or more powerful than the demons and monsters in the castle.

Voice actress Minase has performed Chino in Is the Order a Rabbit?, Hestia in Is It Wrong to Try to Pick Up Girls in a Dungeon?, and Rem in Re:Zero.

Personally, I think the purple-haired princess vaguely resembles Chino. (Since the princess has white hair in the manga, that could be a deliberate reference.)

Mitsue Yamazaki directs the anime series, and the animation is by Doga Kobo.

The manga started in 2016 and is running in Weekly Shonen Sunday.

If Crunchyroll, Funimation, or somebody else has picked up the anime series for North American streaming, nobody has mentioned it.  It doesn’t appear to have a licensed DVD distributor, either.