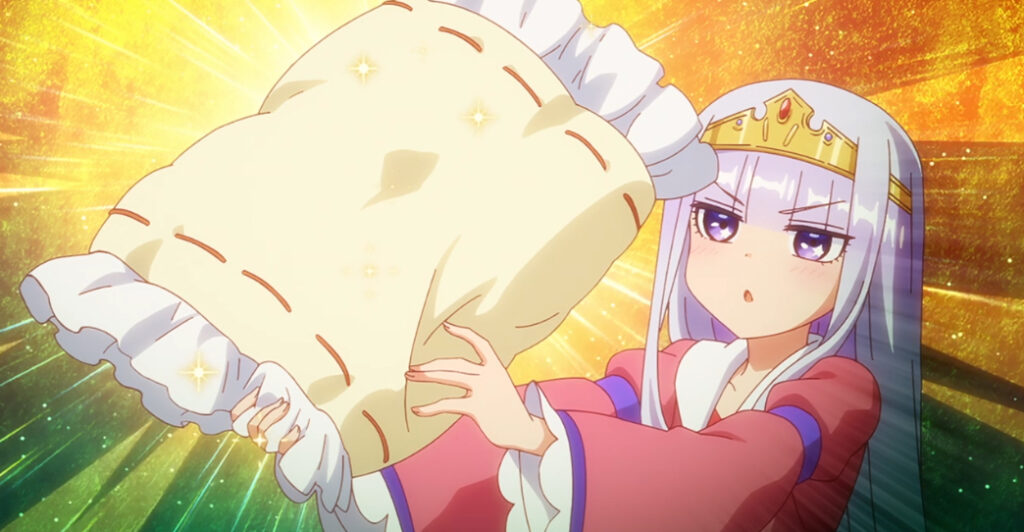 Sleepy Princess in the Demon Castle has just dreamed up the perfect collaboration.

The series is an anime comedy about a fairy tale princess who can’t get to sleep. So, what would be a better collaboration than a Japanese bed manufacturer?

On Tuesday, the anime series announced that it had teamed up with France Bed. The collaboration will include a new show, and related products.

The Road to a Good Night’s Sleep

The series has already produced a few short live-action videos titled, Extreme! The Road to a Good Night’s Sleep (or Kimeyo! Anmin e no Michi!). All of the ones posted so far were filmed at France Bed’s showroom in Akasaka.

These videos feature Yoshitsugu Matsuoka (the voice of Demon King Tasogare) and Hiro Shimono (The Hero Akatsuki).  The voice actors discuss beds and sleeping. In one episode, they also learn yoga sleep positions.

The videos play at the end of the AT-X broadcast of each Sleepy Princess in the Demon Castle episode. You can also watch them at the FuRyu Anime Channel on YouTube, although YouTube’s automatic translation is a bit … entertaining.

The new collaboration will feature a new show, Ask Sleeping Pros! or Nemuri no Puro ni Kiku!’  In the new show, Princess Syalis (Inori Minase from Is The Order A Rabbit?) will interview France Bed’s experts on sleeping.

In the main series, the princess has to go to extreme lengths just to get to sleep. So, we can only assume that the sleep experts will have some useful advice for her.  Ask Sleeping Pros! will be available to watch on the anime series’ website starting on Nov. 20.

In addition, France Bed will have collaboration products at its PR Studio Tokyo Sofa & Bed in Akishima, Tokyo.

In North America, you can watch Sleepy Castle in the Demon Castle on Funimation, although they don’t have the live-action extras.