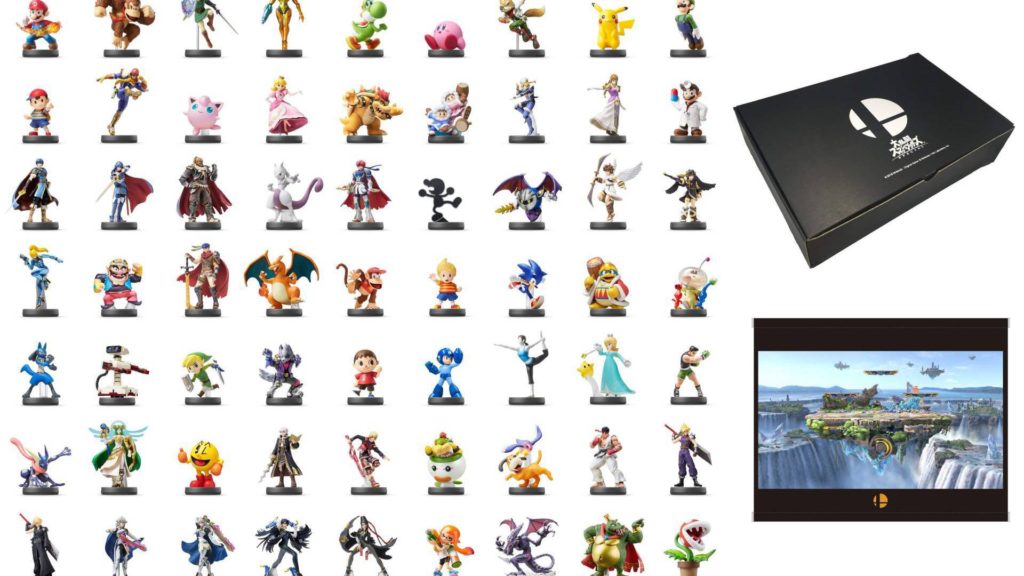 It would perhaps be an understatement to say that more than a few people are excited for Super Smash Bros. Ultimate next month — you can include me on that list as well. This massive collaborative party fighting game looks to be going above and beyond previous entries in the series due to the sheer number of characters, stages, and features included, so it’s no wonder people are looking forward to it.

Amazon Japan is taking a moment of their own to capitalize on this excitement with a special (and very limited) bundle of all the Smash series amiibo released in the past, alongside some of the amiibo for the newcomers to Super Smash Bros. Ultimate, housed within a branded box and including a bundled wall scroll. Many of the amiibo included in this set are quite difficult to find now, with them long since being out of print following the release of the Wii U and 3DS version of Super Smash Bros. The fact that this set could now allow you to collect every single amiibo, including those more expensive ones, in one single purchase could prove to be a very tempting proposition for people.

That’s only if they’re one of the lucky people who can get a hold of it, however. This Amazon-exclusive set will go on sale on December 7th at 6:00 pm (UTC+9) and is limited to just 50 units. Considering the collectability of amiibo, the hype surrounding this new Smash title, and the very limited availability for this set, you’ll have to act fast to have a chance of claiming it.

While the actual price for this set is currently unknown, my personal speculation would suggest it would cost somewhere close to the combined price of each amiibo individually, making it quite a pricey endeavor for anyone interested. With that being said, if you have big pockets and a desire to own this set for yourself, you can find out more at the Amazon page for this deal here.