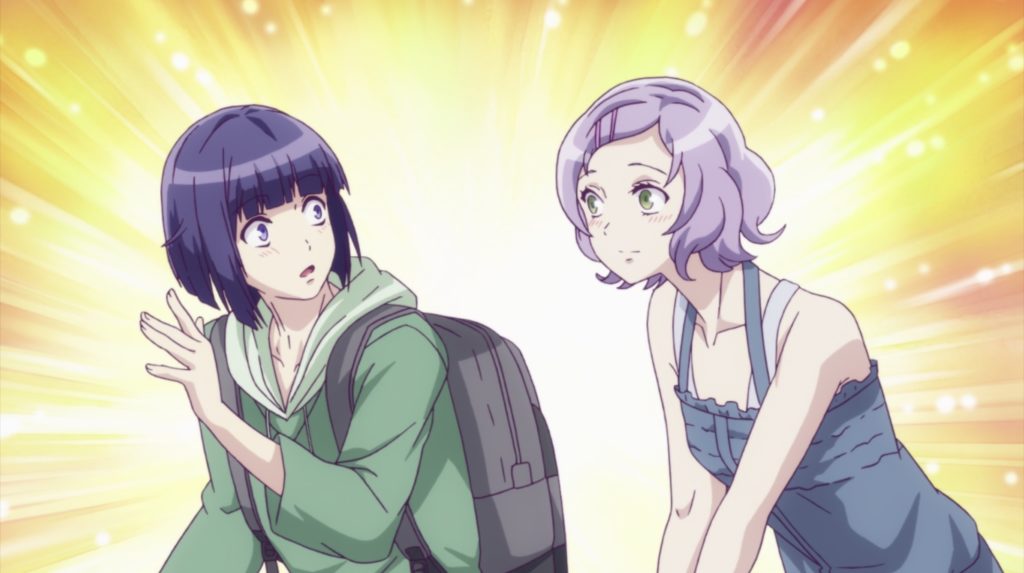 Perhaps it’s fitting, in a sense, that the cover girl for the series is supported and driven by the people behind them who make the whole thing possible. Promotional material for Smile Down the Runway up until this point has relentlessly pushed Chiyuki as the star of the show, yet although episode 5 places the spotlight onto her character for the first time since the runway show in episode 3, her development this week is driven by those around her who arguably take more leading roles. Everything which has got Chiyuki to her position has been through the reciprocal relationship of her abilities being a source of inspiration for the staff who make her clothes and the talents of those staff to create work that emphasizes Chiyuki’s style and ability.

That idea is perhaps the central core of the series and the focus of this week’s episode. If episode 4 firmly placed the focus on Ikuto and their trials as they sought approval as the assistant of the designer they now work as an assistant for, episode 5 of Smile Down the Runway shifts the focus to one of the new characters introduced last week, Kokoro. Chiyuki has been pushing her body and her presence in order to achieve more work off of that success, all with the support of Ikuto, with both characters simultaneously inspiring the other. While this was known, it’s enhanced and interrogated through the lens of Kokoro, who is also established as their own character. With their goals firmly established this week, this new episode of the series clearly sets out the series’ future trajectory in a rather efficient fashion, if you’ll allow the pun. 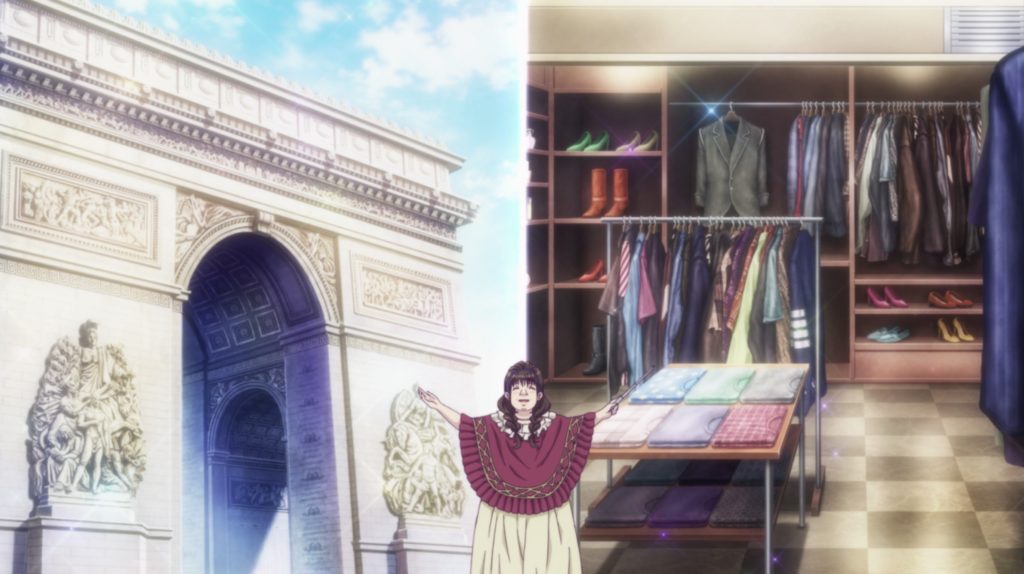 Episode 5 of Smile Down the Runway begins with Ikuto talking to one of the newly-established main cast members from last week’s episode, Kokoro, and their worries with becoming a model. Having the height which Chiyuki lacked would seemingly make them set for the job, yet they’re self-conscious and lack confidence, confiding in Ikuto for re-assurance.

Yet Kokoro wants to become a designer just as much as they want to become a model. Their character is effectively a bridge between the different worlds Ikuto and Chiyuki work within, acting as a player within both of their worlds. Their problems, too, act as a blend of the two characters as well. When Ikuto fears he lacks the ability to design, she fears her ability to model due to the jealousy of those around them.

Seeing the effort she puts into the design work in her own home inspires Ikuto to try his best with his guest appearance at the Geika Fashion School fashion show and his desire to work with her for the event. Yet this work also develops their character further as the belief placed into her by others makes her more confident in herself, confidence which I hope will only grow in the weeks that follow. Importantly, Kokoro’s character isn’t used for the development of our main cast then tossed aside, as she becomes a powerful additional member of the cast in her own light. 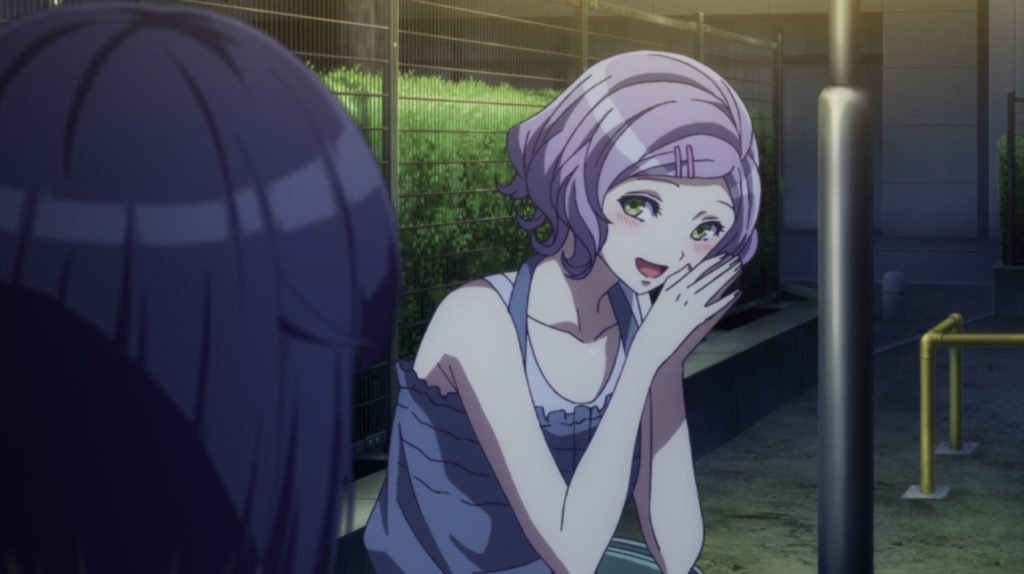 What she brings to the series is something different from what either Ikuto and Chiyuki have been able to contribute to the show so far. While both of these characters are resolute in their beliefs and their determination to succeed, even if Ikuto at times needs encouragement to go down a certain path, Kokoro relies on others and needs the chance to grow into her own. While she may not stand out and hides due to her shyness, her abilities get the chance to shine in a way that is more surprising, and it helps to keep episode 5 of Smile Down the Runway fresh.

Placing a focus on this character allows the series’ central ideas and motivations for our two main characters to flourish. Up until this point Ikuto has been inspired by Chiyuki’s work, yet lacked a person they could look confide in within the same sphere of work as them. Kokoro is that person, and her never-give-up attitude to designing is what pushes him forward to improve at the flaws which he recognizes yet is unsure how to correct. It pushes his character forwards organically as they each compliment the other.

All Eyes on Chiyuki 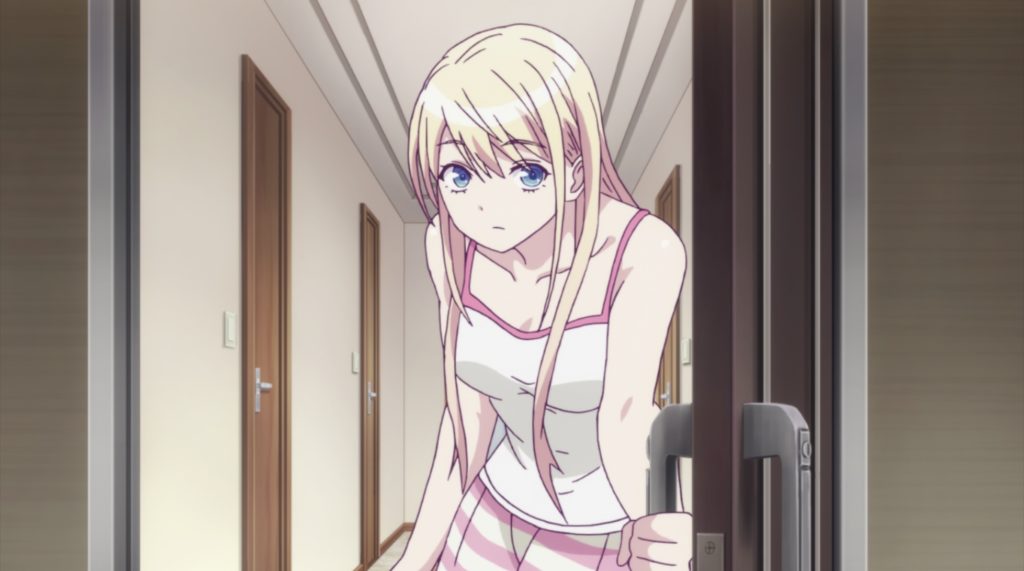 Even though Kokoro and Chiyuki never interact within Smile Down the Runway episode 5, you can feel how the former’s presence in how Ikuto and the audience perceive Chiyuki’s growth since the runway show. The relative struggles each of them has is emphasized by their polar opposite natures, elevating the other as they go about overcoming obstacles standing in their way.

If Kokoro is struggling from the various forces of pressure surrounding them despite genetics blessing them with the height and attributes necessary to succeed on the runway, Chiyuki’s role in the episode is to demonstrate the various ways she has to work to stand out and make her height less of an issue.

Admittedly I’m a little uncomfortable with how Chiyuki is framed in this episode. The camera unnecessarily lingers on her butt and chest as she performs stretches in the comfort of her own home while helping Ikuto find inspiration for the clothes they have to design for the event. It ends up demeaning the rather inspirational lines she gives to him when he’s struggling, as a result, as well as how this work is helping her to reach her own goals and overcome her shortcomings.

However, when you look past this at the contents of this scene and consider it within the episode as a whole, you can see the potential for how these three characters compliment each other. 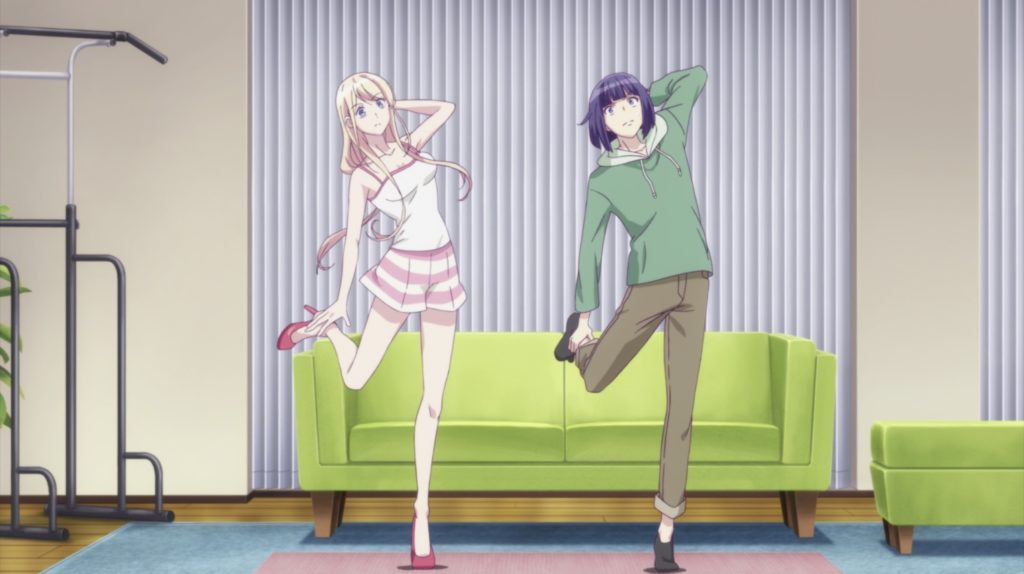 Contrasting Kokoro’s natural gifts to the intense work walking in heels and stretching Chiyuki religiously partakes in emphasizes what she has to overcome if she is to make it on the runway circuit while being as small as she is. Kokoro’s dream isn’t in this field but in design, even if she could find a career modeling relatively easily, and overcoming her difficulties designing while resisting calls to quit make her determination shine through. This determination inspires Ikuto. It’s a self-fulfilling circle that has the potential to further inspire each character as the weeks go on.

Although the episode excels when focused on these dynamics, episode 5 of Smile Down the Runway falls apart when the focus shifts. The rivalry between Ikuto and the fitter who snapped at his celebrations during the runway show feels forced and unnecessary and is perhaps the biggest offender in this regard. Chiyuki’s sidelining, too, in spite of the establishing of her current situation and future intent (a trip to Paris for a weekend to put her name out there), is also hindering the development of not just her character but the stories of everyone else in turn.

Smile Down the Runway Episode 5: Emotional Feelings Right in the Kokoro 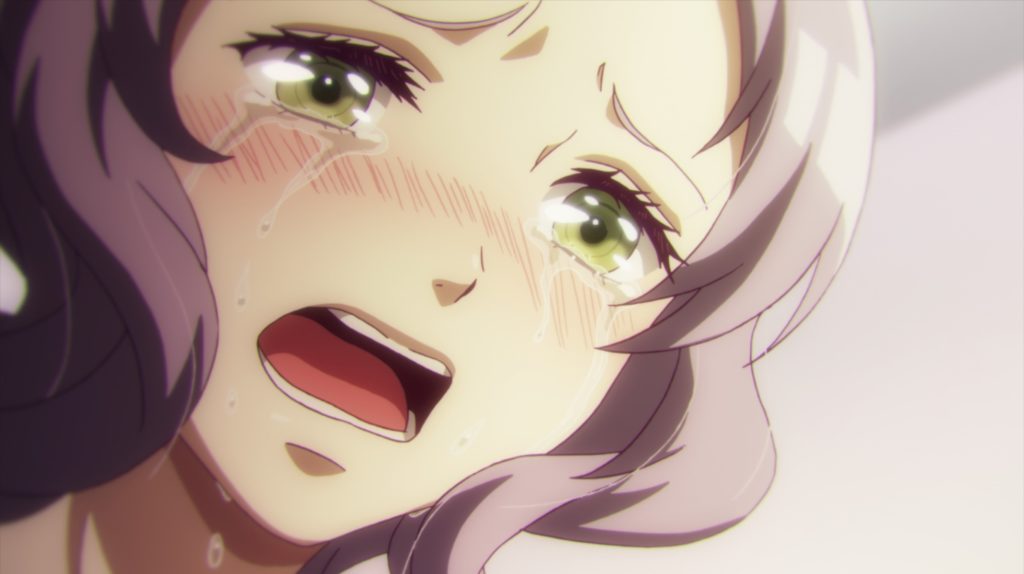 As a whole, however, episode 5, indeed the series of Smile Down the Runway as a whole, is much healthier for the introduction of Kokoro. It seems clear, from how this episode has been handled, that the creators plan to make Kokoro much more of a central focus of the series than other side characters, including the fellow fashion student from last week’s episode, and I’m more than happy with this if it turns out to be the case.

If they go in this direction, I think the series going forward will be vastly improved. Chiyuki and Ikuto are stoic and determined figures in contrast to Kokoro’s uncertainty, yet all face similar issues. Their stories complement each other particularly well in this episode even when they don’t interact, and it elevates them each as a result. While the episode itself suffers from some unnecessary fan service and the fact that it fails to develop any previously established plot thread and drags its feet in places, the character-establishing purpose of this episode is important.

The question, however, is whether the show can capitalize on this. To learn that, we’ll have to wait until the next episode.