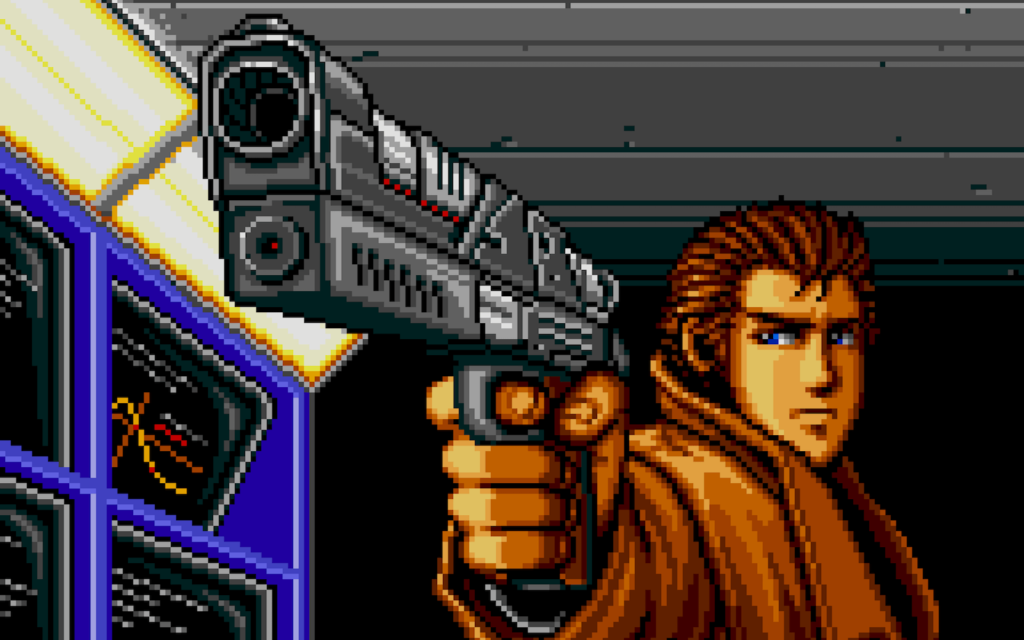 Snatcher is a cyberpunk post-apocalyptic mystery adventure game released by Konami in 1988. It was originally released for the MSX2 and PC-8801.  Despite the game not doing very well in its commercial release, it received many positive responses and managed to get a cult following, leading to the release of an MSX2 role-playing remake called SD Snatcher, and A CD-ROM remake in 1992. Snatcher also later got an english-language port for the Sega CD.

Snatcher was developed by a small team, which helped create a tight, engaging story. It is considered the spiritual predecessor to the japan-only release of the game Policenauts. an interesting combination of elements, and has an overall visual novel feel. There are also some semi open-world exploration elements, as well as some first-person shooter action sequences.

The game was praised widely for its intricate high-quality cutscene graphics, especially for the time, engaging storyline, and an interesting complex cast of characters.

Hideo Kojima, who directed, designed, and wrote Snatcher, wanted the games to have a cinematic feel, and took inspiration from a lot of films that were popular at the time, such as Alien and Blade Runner.

Snatcher combines elements from many different sources, such as  Blade Runner, Invasion of the Body Snatchers, and Metal Gear – also written and designed by Kojima – which there are several nods to. At the beginning of the game, you are gifted a robot companion named Metal Gear MK2 (basically the same robot from the Metal Gear series) who functions as a guide through the story’s narrative.

How Do You Play Snatcher?

Fifty years ago, a biological weapon from an unknown world called Lucifer Alpha landed on earth and wiped out most of the world’s population. In the present year of 2047, we follow the protagonist and recent amnesiac Gillian Seed as he pounds the pavement of Neo Kobe City, an artificial city built somewhere in Japan.

Gillian leaves his wife at the beginning of the game because they both have gaps in their memory that leave them unable to relate to each other on the level they used to. But Gillian knows the Snatchers somehow hold the key to both of their memories, and so leans fully into his job as a Junker in the hopes it will help him recover the truth about their pasts.

Gillian works as a Junker for a task force by the same name – basically a bounty hunter for robot entities called Snatchers. Snatchers – also known as Bio-roids – are artificial life-forms that not only kill but replace humans and infiltrate the population. This mirrors modern-day fears about being replaced with the advancement of robots and artificial intelligence technologies.

The player navigates the game in much the way you would a modern-day visual novel –  moving from place to place, investigating the environment, talking to people and asking questions, collecting items, and so on.

This being pre-Nintendo DS days, there is no point and click interface, but a menu that allows you to select the things you wish to interact with and investigate,  which some players may find frustrating. While there are multiple dialogue options, there is a linear story that the player is guided toward, so no multiple endings here. There are occasional first-person shooting sequences in which the player shoots the enemy within a 3×3 grid.

As to be expected, the game deals with complex themes, societal questions, and does not shy away from violence or gore. One of the first events in the story is the murder of a fellow Junker, and much of the plot is driven by finding out who killed him and why.

Snatcher is also not shy about dealing with more adult themes –  Several versions of the game are censored for the depiction of nudity and some violence, and Gillian regularly hits on the women he comes across, to the point of being a little creepy at best. There’s even a scene where he has to interview a stripper.

In 2011, Kojima was approached about the idea of a Snatcher sequel and he was open to the idea, so long as there were enough copies sold. But as it stands, Konami is not currently interested in a re-release. It’s a shame, because with some tinkering, it could easily be a new switch retro classic.

You can play it on an emulator, but there are full playthroughs available to watch on YouTube. If nothing else, the movie-level effort put into the cutscenes make for an interesting watch.