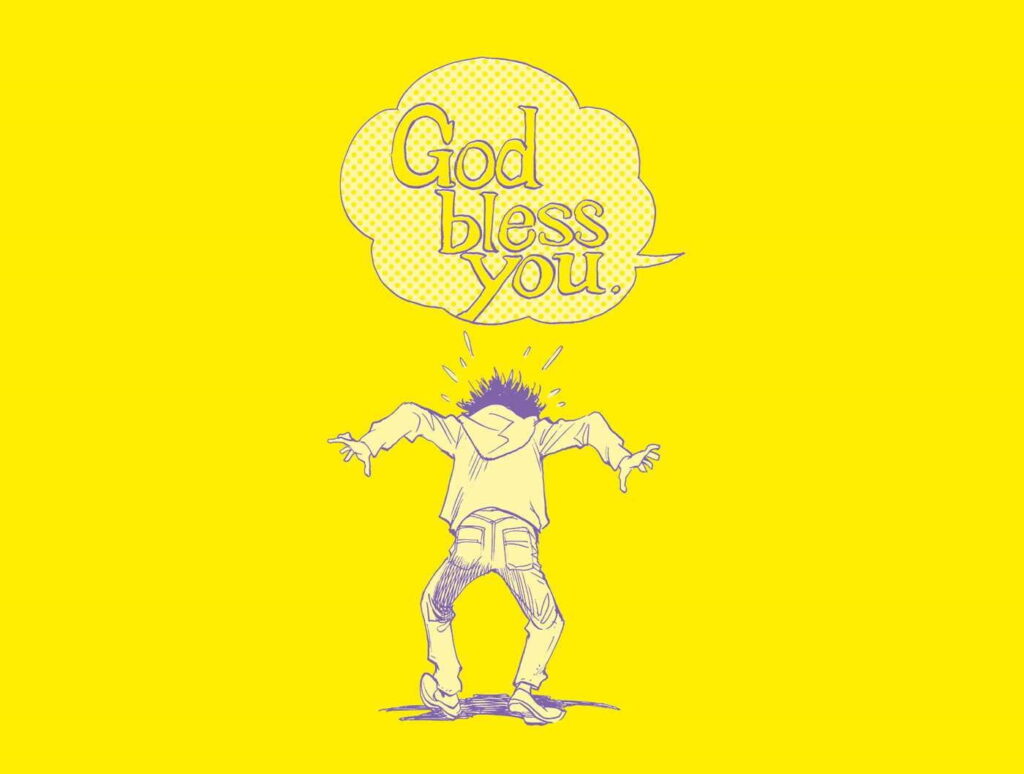 The release of Sneeze: Naoki Urasawa Short Story Collection (Kushami: Urasawa Naoki Tanhenshu) in English is a welcome move by VIZ Media. Not only does it provide more Urasawa content for fans in the English-speaking world, it also provides us with a great snapshot of what makes Urasawa so great: his idiosyncrasies, his passions, and his influences.

Naoki Urasawa has had an illustrious career. Debuting in 1985 with Pineapple Army, the 60-year-old creator has continued to be a leading light of the manga industry, winning the Osamu Tezuka Cultural Prize twice and contributing to the legitimization of the medium through such educational programs as Manben. Some even call him the “Osamu Tezuka of his generation,” but I think this description is too simple: it fails to take into account some key differences between the creators.

Music has always been one of Naoki Urasawa’s primary obsessions. In Talkin’ About Bob Dylan (Diran wo Katarou) – Urasawa’s book about one of his favorite performers written with Koji Wakui – the artist talks about when he was a kid, struggling to pick between “being a mangaka and being a musician.” For young Urasawa, both Osamu Tezuka and Bob Dylan were his idols in equal measure – who knows what would’ve happened if he’d have chosen the latter.

Regardless, Sneeze provides a perfect outlet for us to discover some of Urasawa’s music obsession, collecting as it does three short stories about music or musicians. The first, ‘Fathers,’ is a little bit all over the place; it initially follows Urasawa and his fellow middle-aged friends as they experience a folk izakaya, but quickly shifts focus to a Bob Dylan concert.

That’s no big deal, however, as this segment shows just how much Urasawa is transfixed by music – and Dylan in particular. The way that Urasawa captures the little details of his performance is astounding: everything from the way that Dylan walks across the stage to how he appeals to the crowd is clearly born from the mind of a fan who spent the whole time drinking it all in.

Unfortunately, it seems as if Urasawa has yet to meet with Dylan (not surprising given how reclusive the artist has been since his motorcycle accident in the 1960s), but he did enjoy a close friendship with another legendary folk artist: Kenji Endou.

Endou was arguably just as influential as Bob Dylan in terms of boosting folk music’s popularity in post-war Japan, as he and others took influence from American artists and even translated their songs into Japanese. Of course, the main character of 20th Century Boys is also named after him.

‘It’s a Beautiful Day’ in Sneeze tells a different story; one told to Urasawa by Endou before he died. As he explains afterwards, he had always wanted to do it, but didn’t get the chance to do so due to regular serializations until after Endou passed away in 2017. Either way, he was surely a great source of inspiration.

Urasawa’s connection to music hasn’t always been as a fan, either. Alongside making friends with various musicians, the mangaka has also released material of his own – most notably Mannon, which recently got a vinyl release through Speedstar Records. ‘Musica Nostra’ tells the story of how that happened, following Urasawa as he visits Los Angeles and records with various famous musicians.

In all honesty, this is probably the best story in Sneeze based purely on Urasawa’s reaction when Jim Keltner – session drummer for various artists, including Bob Dylan and The Beatles – sends Ringo Starr a picture of Urasawa’s Beatles manga and gets a reply. Starstruck doesn’t even begin to describe it.

A Thriller Out of Anything

The fact that so many of the short stories in Sneeze concentrate on music speaks to the fact that, outside of regular serializations, Urasawa has always been pursuing other endeavors – it seems as if he did not have to make the choice between being a musician and being a mangaka, after all.

Still, Urasawa is undoubtedly known, most widely and most famously, as a mystery and thriller author. While his first original work Yawara! was a sports comedy series, he would go on to become a legend thanks to such series as Monster and 20th Century Boys. Both focus heavily on mystery storytelling, which Urasawa continued to employ throughout the rest of his career.

As a result, that many of the other short stories in Sneeze focus on mystery or thrillers should come as no surprise. But these are not Urasawa stories as you know them: they are weird, wonderful, and prove that he can make a thrilling narrative about literally anything.

‘Damiyan!’ begins the Sneeze story collection in a very bizarre fashion. Published in Weekly Big Comic Spirits in 2016, it tells the story of the titular Damiyan and his friend as they lend their services to a local yakuza. What are they offering, you may ask? The ability to make anyone collapse with just a single glance.

Unfortunately, finding out about that power is half the fun, so the first entry in Sneeze has effectively been ruined for those who have yet to read it. Even so, it’s not that deep, and later mystery stories are much more effective – ‘Throw It to the Moon!’ being a great example.

Following the central character Jessie from childhood to adulthood, ‘Throw It to the Moon!’ immediately creates sympathy by placing him at his lowest: having once worked at The New York Times before staking his career on a story that turned out to be a falsehood. Even more effective than that, however, is how the mystery develops: Sneeze’s second story opens with a mysterious old man giving a bunch of vague predictions, and seeing how they come true was honestly astounding. It’s perfectly crafted Urasawa storytelling at its finest.

How about some of the others? ‘Henry and Charles’ is entertaining as it follows two mouse protagonists, showcasing obvious influence by classic western cartoons (Urasawa points to Looney Tunes in the afterword). ‘Monster Kingdom,’ too, is intriguing in light of Asadora!, where the author also uses the concept of kaiju – considering that it was only published five years before that series. Could this have been a trial run for a longer kaiju-themed work? Maybe.

If these more mystery-focused stories in Sneeze prove one thing, however, it’s that Urasawa can craft a compelling narrative out of literally anything, regardless of the characters or the concept. That’s doubly true for Solo Mission, which we have yet to talk about: despite being only eight pages long, it manages to set up an effective character dynamic before delivering a one-two punch in the form of a twist ending. What more could do you want?

Those unfamiliar with the work of Naoki Urasawa may find Sneeze a little uncompelling. Sure, these stories are solid, but they are nothing compared to the masters of the short form in manga – Yoshihiro Tatsumi being the first that springs to mind.

Nevertheless, what made Sneeze unforgettable for me, as a massive fan of Urasawa who considers him one of my foremost creative inspirations, was how it provided in miniature so much of what I love about his stories.

The music stuff comes mainly from sharing his taste and reading material that it is not yet available in English (mainly Talkin’ About Bob Dylan), but the mystery storytelling is undoubtedly more universal: anyone hankering for more Urasawa until Asadora! (and Billy Bat!) are released in English should check it out.

You can pick up Sneeze: Naoki Urasawa Short Story Collection via VIZ Media.