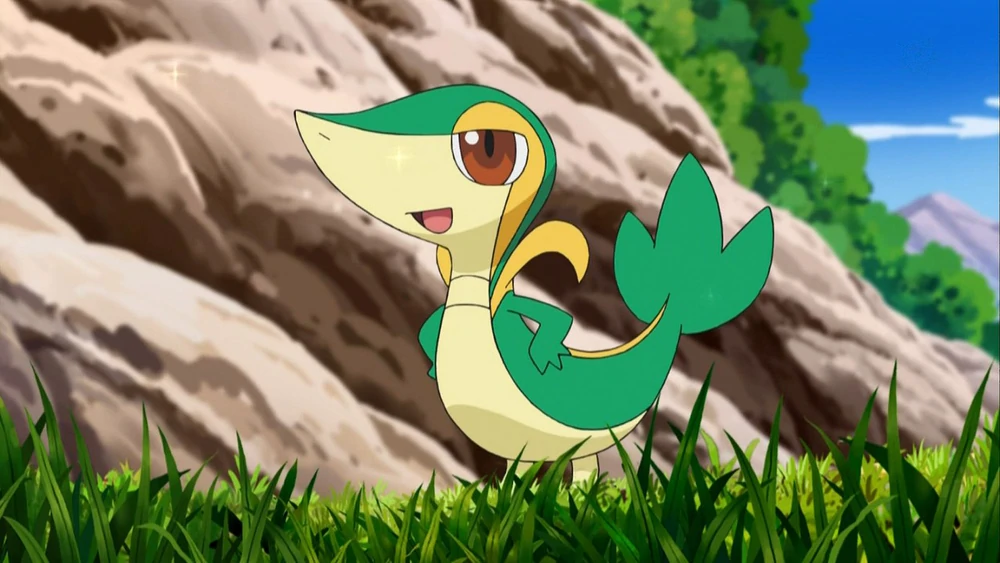 Flourishing all the way to a milestone 25th anniversary, Pokémon is older than some of our parents were when they introduced us to the world, and that has nearly the entire OTAQUEST line-up in their feelings. One almost feels like our parents created us just to one day experience Pocket Monsters. We’re pondering our favorite Pokémon generations; we’re reminiscing about Pokémon oddities already a lifetime old.

As we simultaneously look towards Pokémon‘s continued success and juxtapose it against our own personal experiences with the games, anime, and its unique culture (without getting too grandiose about it), we can surely say ‘damn, there’s a lot to like about Pokémon, huh?’ Part of Pokémon‘s near-permanent appeal inarguably is its simple but instantly recognizable monster design… Something Snivy perfectly embodies.

Snivy entered the Pokémon world (and the real world for that matter) in 2010, when the fifth generation of Pokémon ‘Black and White’ first declared themselves to the world. Continuing the underdog grass legacy started by Bulb Of Saur 25 years ago, Snivy made waves in the 2010 internet meta for their poise, their braggadocio, and their undeniable charm.

Before their name was unveiled publicly, internet denizens took to calling this plant reptile ‘ whMUGLEAF’ because, well, just look at that grin. Obviously I and thousands of other young adults still playing Pokémon in 2011 named their in-game Snivy ‘SMUGLEAF.’ We instantly fell in love with this serpentine creature for its design alone, even though its arms fall off when it evolves.

Snivy bridges what should be an oxymoronic gap between ‘simplicity’ and ‘complexity’, all while exuding a completely individual flare. ‘Leaf’ and ‘Reptile’, these are the two basic design archetypes of Snivy. Anybody can easily infer these a glance, but they come with enough subtle accents to inch up the recognizability factory considerably.

The yellow around Smugleaf’s eyes that runs back and then pops out of their neck as a regal collar, adds some inherent personality to the creature. The three-pronged leafy tail is both adorable and sharp. The 5th gen grass starter exists in the middle of the ‘cute’ and ‘intimidating’ Venn Diagram, a worthy goal for any Pocket Monster.

Finally, Gamefreak slapped on the mon’s now-signature smug smirk to create a legend.

We’re not saying Snivy is the best Pokémon of all time. Every fan has their own favorite and we could never convince you otherwise. However, they are a ‘perfect Pokémon‘, SMUGNESS and all.

We here at OTAQUEST fundamentally reject that the best of Pokémon design came from the first generation alone, as you’re kidding yourselves if you think Pokémon like ‘Hypno’ or ‘Mr. Mime’ could hold a candle to dear SMUGLEAF.

Of course being a starting Pokémon probably meant Snives got a bit more time and consideration put into their look than some others over the years… But they’re a true testament to being able to do a lot with a little, which from the very beginning separated and put-on-a-pedestal Pokémon from all the rest.