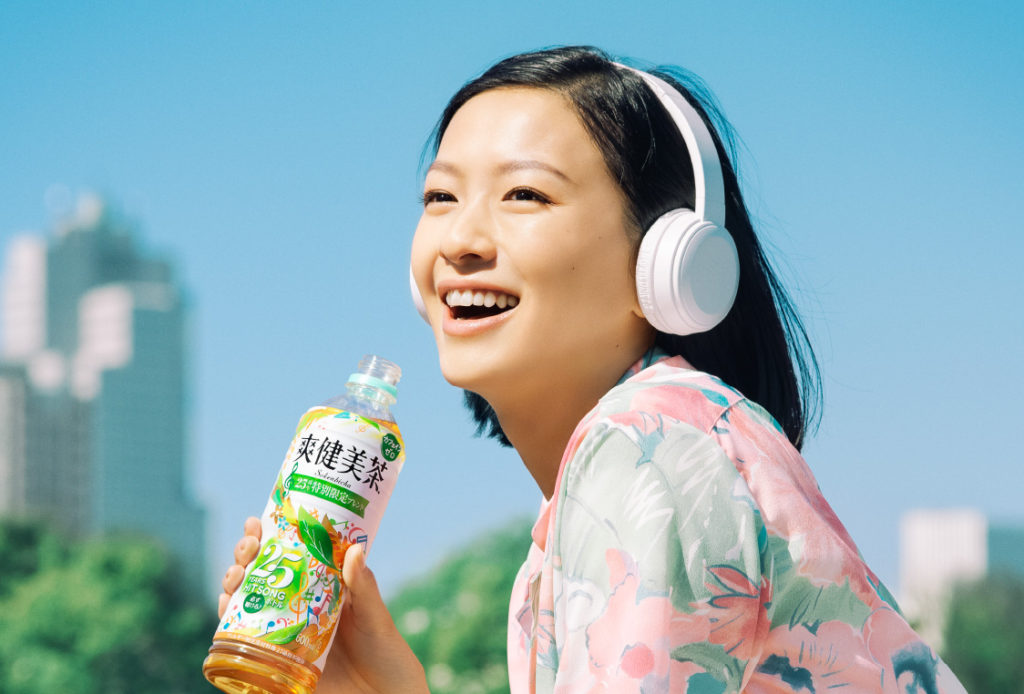 If you’re unacquainted with Sokenbicha and live outside of Japan, I probably couldn’t blame you. The Coca-Cola sub-brand has, for 25 years, been quenching thirsts for anyone in Japan looking for an off-the-shelf bottled barley tea. Now, looking back on those past 25 years, Sokenbicha is eyeing the current generation of Japanese musical talent to celebrate. In a campaign which launched in Japan today, Sokenbicha finds themselves working with the likes of HoneyComeBear, Moe Shop, Neko Hacker, TeddyLoid, TORIENA, Yunomi, KOTONOHOUSE, yonkey, yuigot, Masayoshi Iimori, and Yasutaka Nakata.

Right now a quick trip to your local conbini will present you with a handful of options; you’ve got a blue, orange, pink, and green bottle of Sokenbicha to choose from. Each of these colors corresponds to a different type of song, with each type receiving new songs throughout the month. For example, if I was to go and purchase a pink bottle right now I’d get access to KOTONOHOUSE’ cover of Momoiro Clover Z’s “Hashire!”. If I purchased the bottle on May 20, I’d also have access to yonkey’s cover of Fuyumi Sakamoto’s “Mada Kimi ni Koishiteru”, repeated with new songs weekly until May 27.

With a bottle of Sokenbicha averaging around the cost of an actual song on iTunes, you’re greeted at the bottom of the webpage with a section titled “My Collection”. With each song you unlock from the various sections during the course of the campaign, a corresponding bubble will populate and you’ll be able to access the song from there freely. Unfortunately, given the format of the promotion, songs can only be listened to through the webpage, and only on your smartphone. That being said, such a list of songs honestly makes it a pretty decent tradeoff, and one can only hope someday in the future we’re able to see the list go online.

With a steady flow of songs dropping through the program over the course of May, I’m beyond excited to see what such a stacked roster of musicians bring to the table. Not just that, these are also some of the biggest songs in Japanese music history from the last 25 years, and that in itself is a big deal. While I can’t quote the availability of these songs internationally, unless you’ve got some crazy up-to-date Japanese import stores, it’s still incredibly cool nonetheless. For those interested in checking out further details on the campaign, be sure to visit Sokenbicha’s official website.