As if Karakai Jouzu no Takagi-san creator Souichiro Yamamoto didn’t have enough on their plate. Despite already having two series in concurrent serialization, it was announced today that Yamamoto would be adding a third to their belt – a serialization based on their Twitter webcomic, Shougi no Yatsu.

That being said, it’s not immediately obvious that Yamamoto’s new serialization is based on the webcomic. Rather, publishers Kodansha have decided to give the series a new name and omit the original’s name from all of the press releases. But even if it’s going to be called Soredemo Ayumu wa Yosete kuru, those who have been following Yamamoto’s work online recognized the series straight away from the key visual: 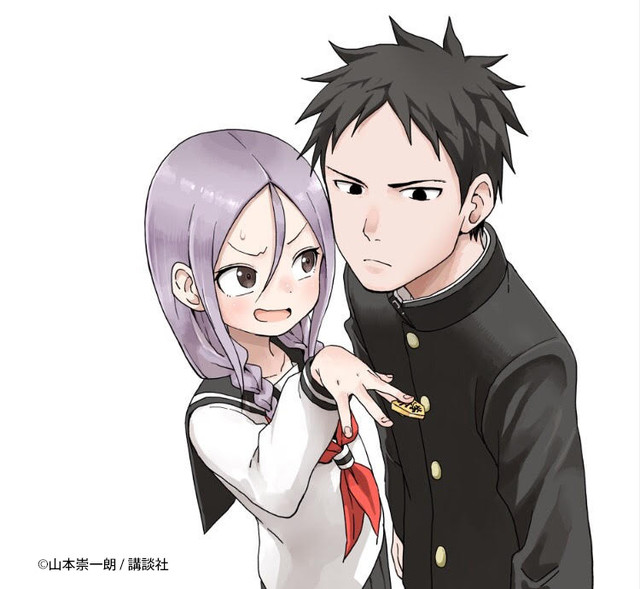 These characters are exactly the same as the ones who have been appearing in a series of webcomics posted to Twitter under the name Shougi no Yatsu by Yamamoto since last April. Their designs are more refined than they are on Twitter, but I’d assume that’s just because Yamamoto has just put more effort into them.

There are currently 19 ‘chapters’ of the webcomic available via Twitter, and the story is pretty much what we’ve come to expect from Yamamoto – that classic ‘push and pull’ relationship as two character butt heads while they struggle with their feelings of love for each other.

What is surprising though, is that the announcement of Shougi no Yatsu’s serialization means that Yamamoto will be tackling three series in concurrent serialization come March 6, when Soredemo Ayumu wa Yosete kuru begins in Weekly Shonen Magazine. This is because aside from Takagi-san, Yamamoto began another serialization in February with Kunoichi Tsubaki no Mune no Uchi.

It is true, however, that the above two series are being published in Gessan on a monthly basis, and Soredemo Ayumu wa Yosete kuru will be published in Magazine on a weekly basis – thus spreading out Yamamoto’s deadlines a little bit. But even so, I’m not sure whether to respect or fear Yamamoto’s tenacity – most mangaka struggle with one series, let alone three.

Despite this, I’m looking forward to seeing Yamamoto work their slice of life magic once again. Soredemo Ayumu wa Yosete kuru also joins Giji Harem as the second webcomic to get serialized in recent months – just showing how much a strong social media following can influence a publisher’s decisions.