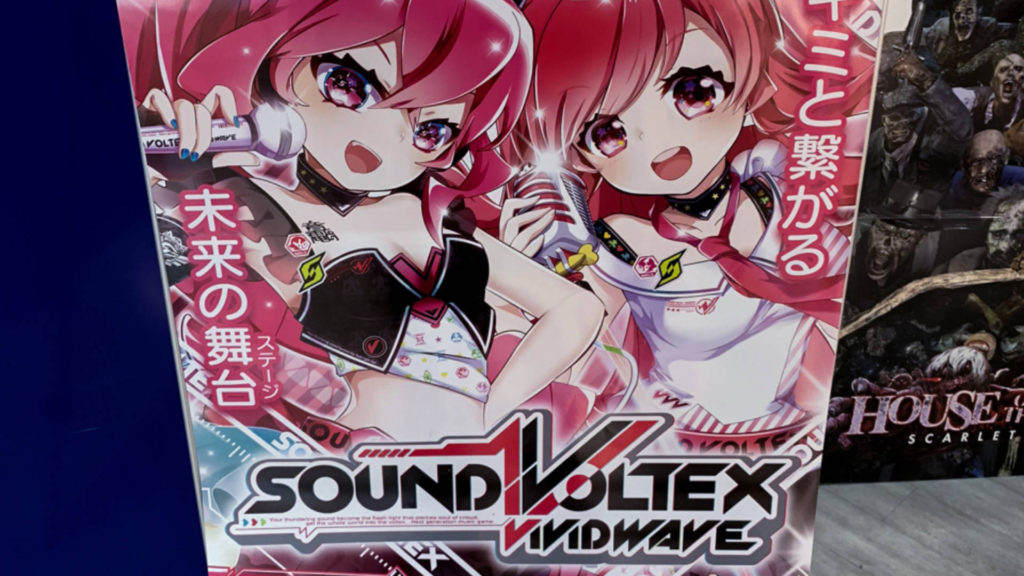 If you have gotten comfortable with the futuristic themes of an intergalactic space war between Raisis and Grace in SOUND VOLTEX, I hope you’ve gotten over it, because now, we’re going to the Idol Stage. This is Sound Voltex VIVID WAVE (Not to be confused with the similar looking font of Hachioji P’s album VIVID WAVE). As a fun side note, this is the first SOUND VOLTEX game since the original SOUND VOLTEX BOOTH to not feature a roman numeral after the title, so you can add that to the list of visual departures too. We made our way to GAME Silk Hat in Kawasaki near Tokyo to check out the location test. The tickets to play are given out as a random number which we were not as lucky as we were with the Beatmania IIDX26 ROOTAGE location test, where we got number 27. This time, we drew…156. By 3 in the afternoon, the person who drew number 65 was able to play. So with that being said, we didn’t get to play — but we got to see a decent amount of the action.

A harsh departure from the visually pleasing aesthetic of sharp angles, moving pieces, and overly futuristic looking interfaces, we are now presented with an extremely pink and white interface, a la SOUND VOLTEX II – Infinite Infection, which is still visually appealing, but different. This time around, we’re presented with angular text, which is very reminiscent of the font used for Beatstream II, we’re also presented with characters placed on the screen during mode selects (complete with breast physics), through to the song select screen which is quite simply an updated version of the song select screen we’ve come to grow and love from SDVX3 and SDVX4 only this time, there are some new options so you can access from the song select screen such as your note speed and judgment offset. There have also been some new sorting functions added as well.

Upon inserting your coins you’re presented with the standard ‘E-Amusement Pass’ login. Once you’ve authenticated, you’re asked if you wish to transfer your play data to SOUND VOLTEX VIVD WAVE. Once this has been completed, you’re on to the mode select screen which is when the changes begin. On the mode select screen, you’re presented with a character, which I could at this time only assume is your selected ‘Navigator’. This feature was not implemented on the Location Test build, so it displayed characters at random. The character takes up the left half of the screen, and your modes being displayed on the right half of the screen. Previously, you were presented with ‘Light Start’, ‘Standard Start’, ‘Blaster Start’. On the location test build, we were presented with a new kind of start, titled, ‘Vivid Start’. Vivid Start was described as 2 songs, and 1 Automation Paradise. This brings us to the next new implementation on VIVID WAVE.

Automation Paradise – Quite possibly the most surprising new addition to the game, it is a randomly generated setlist of 3 songs from a predetermined list which have been mega-mixed together. On the location test, there was a handful of songs which were ‘Automation Paradise-ized’ all of which were pre-determined at 180BPM, which we’ll list below:

In regards to new tracks, there was not a huge amount of tracks that were present on the Location Test build of the game, unlike the recent location test of Beatmania IIDX26 ROOTAGE, there were only 9 new songs in the game, 2 of them coming from recent album releases including Camellia’s new album “GALAXY BURST” and lapix’s new album “L”. We also are graced with the Pop Team Epic theme as well as the return of Sampling Masters MEGA, and longtime BMS artist ‘paraoka’. However, with such a small new song list being available at this time, we can only assume that the release won’t be coming until after the beginning of 2019. Upon selecting your track, you are presented with the new gameplay interface which is very similar to what we’ve experienced in previous SOUND VOLTEX games, however this time, the background of the play area looks to be what you would grow akin to seeing at idol shows with multiple colored Lumica light sticks and a grand stage behind the playfield. Once completing your track, the result screen displays a similar large character display with your grade ranking directly next to it in a large font with your play stats displayed as well.

While we didn’t get to play the game directly ourselves, we did get to spend some time basking in its glory, and needless to say, we’re impressed in what we saw. All in all, SOUND VOLTEX VIVIDWAVE is shaping up to be what looks to be an interesting addition to the franchise and is appearing to try to reach a more mainstream crowd. As always, we will be on top of the upcoming announcements regarding SOUND VOLTEX VIVIDWAVE.