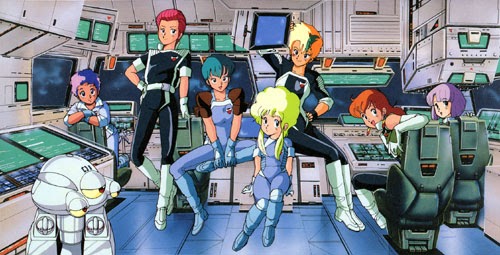 Gall Force is somewhat unique for being based on hobbyist model kits.  There are nigh-infinite anime series based on manga, quite a few series based on light novels and several based on giant robot toys.

But, you can count the number of anime series based on models — not singing idols or fashion models, but plastic models — on one hand. 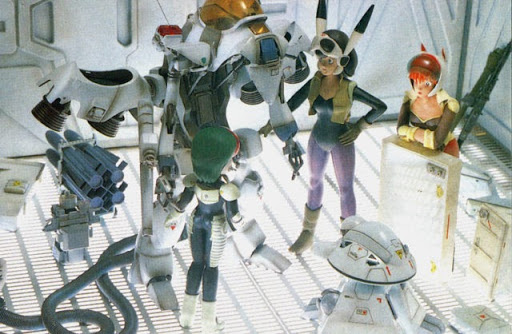 Star Front was a 3D photo novel which appeared in Model Graphix. Model Graphix is a Japanese hobby magazine which specializes in plastic model kits and figurines.

Naturally, given its hobbyist origin, the Star Front story features a lot of mecha, spaceships, futuristic vehicles and science-fiction weapons.  These are all actually scratch-built models, which are depicted as being operated by (models of) the Gall Force characters. There are also manga-style illustrations which go along with the story.

In Star Front, three Gall Force heroes — Rabby, Patty and Rumy — fight the evil Commander Dohn (or Dorn) of the Paranoid Fleet.  They must defend the planet Chaos while waiting for the rest of the Solnoid Fleet to arrive.

The story and characters are similar to the first OVA, but different enough to make a separate story.  As a result, some people consider Star Force to be either non-canon or else representing an alternate timeline.  Still, there would be no Gall Force without this unique version.

For many fans, the story of Gall Force really begins in 1986 with the anime OVA film Gall Force: Eternal Story.

Eternal Story tells about the crew of the Star Leaf, a space battlecruiser which is part of the Solnoid Fleet. The ship was damaged in a battle and got separated from the rest of the fleet.

Left on their own, the crew of the Star Leaf heads for planet Chaos, which was part of their original instructions.  There are only seven people remaining onboard the ship — Captain Eluza and her crew: Rabby, Lufy, Catty, Pony, Patty and Remy.

The Solnoids are all female, and they have been fighting against the Paranoid Fleet. Just like in Star Front, the Paranoids are led by Commander Dorn.

Technically speaking, neither the Solnoids nor the Paranoids are human. They’re all aliens.

But the Solnoids are at least humanoid (and cute female ones besides). Meanwhile, the Paranoids are always shown wearing powered armor suits — which, following the example of Gundam, Macross and many other space anime series, traditionally means that they must be the bad guys.

Unfortunately for the Star Leaf, it seems that everything is not quite that black-and-white.   They don’t realize that they are actually part of a secret experiment — and members of both the Solnoids and the Paranoids may be involved.

One of the crew members is implanted with an alien life form. Our heroes end up fighting both the Paranoids and the Solnoids to protect this new life.

As it turns out, much of the action took place in our solar system long before human beings arose. It is heavily implied that the “new life” may be the beginning of intelligent life on Earth.

The story continues in the 1987 OVA, Gall Force: Destruction.

This sequel takes place ten years after the original movie.  Lufy, an original crewmember of the Star Leaf, is discovered frozen and brought back to life.   She is reunited with Catty on a new spaceship, the Lorilei.

As the war continues, both the Paranoid and Solnoid homeworlds are destroyed.   Catty is revealed to be an android, and there are many Catty soldiers in the Solnoid Fleet.

The war intensifies with a planet-destroying weapon developed, and the former Star Leaf members must stop it.

Gall Force 3: Stardust War (1988) brings the first story arc to a conclusion. It seems that both sides in the war are determined to bring about Mutually Assured Destruction.

The OVA came out at the very end of the Cold War, when nuclear war between the United States and the Soviet Union was still a possibility — albeit a fading one.  The Gall Force series reflects this, with its two opposing sides locked in perpetual war.

In the 1989 OVA, Rhea Gall Force, the action moves to the 21st century.   Ancient alien technology — remnants from the first movie — is discovered on Earth.

Humans use this technology to create new weapons and develop new synthetic lifeforms.  World War III starts, and the synthetic creatures turn against the humans.

This is followed by the Earth Chapter Arc of Gall Force. These OVAs came out in 1989-1990.  Post-apocalyptic people start a new civilization on Mars.

A few human survivors are left behind on Earth. Mars sends troops to help the Earth resistance.

Mankind returns to Earth, and a new cyborg race called the Yumans rises up.  Inevitably, there is a conflict between humans and the new race, who consider themselves superior.

Both sides in the human-Yuman battle are threatened by an artificial intelligence called GORN. Of course, a small group of heroes — who resemble the original Gall Force team — must stop GORN.

The main characters are very similar, but there are no Paranoids.  Instead, the story features two factions of warring Solnoids.

It seems that the Solnoids are divided into “West” and “East” armies.  Eluza, Rabby, Patty and Rumy take the side of the East in the civil war; while Lufy is initially with the West.

Catty and Pony are leaders of Conch, an anti-war organization.  These seven heroes team up and discover that the war is secretly being pushed forward by Commander Pfizer.

TV Tropes notes that Gall Force: The Revolution has an “all-star cast.”