For years, science fiction stories have depicted outer space as an endless, metaphoric ocean. Star Trek has the USS Enterprise, named after the many U.S. Navy ships with that moniker. The Enterprise is crewed by a captain, commanders, lieutenants, and ensigns, and it belongs to an organization called Starfleet. Star Wars has Star Destroyers, and space battles which resemble naval battles. 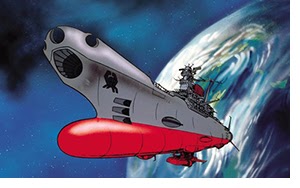 The Japanese science-fiction series Space Battleship Yamato takes that idea a bit more literally. In the 1974 anime television series, the giant titular spaceship is actually built around the shell of the Japanese battleship Yamato.

It’s a visually appealing idea. You have that big gray, curving hull with the bridge in the back and all of those gun turrets — the old guns have been replaced by futuristic equivalents, but they still look like big battleship guns.

In case there was any doubt as to the space battleship’s oceanic origin, there is also a big red bulge called a bulbous bow in the front.

Note: On Earth, bulbous bows help big ships deal with drag and add stability. In space, they just look cool. Also, it turns out that the Yamato is designed so it can be used for ocean travel as well as space travel.

It even has space anchors, or Rocket Anchors, used in the same way as a regular one, but also available for gravity ‘slingshot’ moves (not the usual method).

The original Space Battleship Yamato series (or Uchuu Senkan Yamato) takes place in the year 2199. Earth is attacked by aliens. The aliens, known as either Gamilas or Gamilons, have destroyed the Earth’s surface with radioactive bombs.

Mankind has retreated underground, but it can’t stay there. In order to survive, human beings must learn to live in space. But they must also find a way to fight back against the Gamilons.

Fortunately, humans have an ally: Queen Starsha of the planet Iscandar/ Iskandar. Starsha sends a message capsule to the humans, which contains instructions on how to build Wave Motion technology.

Using this information, Earth is able to build a faster-than-light spaceship.

The new spaceship is the greatest remodeling project in history, making a World War II-era battleship worthy of space travel.

You may have noticed that we haven’t even gotten to the actual plot yet. The basic premise is just that awesome.

The first few episodes deal with the planning, construction, and launching of the space battleship. The Gamilons want to prevent Earth from launching the ship.

Once the Yamato gets launched into space, there are still more problems. The Gamilons have a hidden base on Jupiter and another base on Pluto.

The Gamilons are determined to stop the Earthlings and their spaceship. Fortunately, the Yamato is heavily armed with a lot of weapons, especially the Wave Motion Gun.

The Wave Motion Gun is a large weapon that can be seen on the bow of the ship. The gun has been described as a ‘laser beam on steroids.’

It can destroy just about anything, although it takes time to charge up. It could also destroy the ship if six shots are fired at once.

The gun was invented by the Iscandarians, along with the Wave Motion engine. The engine propels the ship and provides power for the gun.

The Yamato’s ultimate destination is Iscandar, where Queen Starsha will provide them with the technology needed to save the Earth.

By the end of the first season, it is revealed that Iscandar and the homeworld of the Gamilons/ Gamilas are twin planets.

We also learn that the Gamilons’ attack on Earth happened because their own world was dying.

In the end, the Yamato is able to return to Earth and save the world.

A Space Battleship Yamato movie was made in 1977. This film took the first season of the anime and turned it into a film. In 1978, it was dubbed into English as Space Cruise Yamato or Space Cruiser.

A second film was created in 1978. This was called Farewell to Space Battleship Yamato: Warriors of Love or Arrivederci Yamato.

In Farewell to Space Battleship Yamato, the Yamato faces a new threat, the Comet Empire. The Yamato is sacrificed by ramming it into the emperor’s ship.

The Comet Empire returns, but the Yamato is not destroyed.

Yamato: The New Voyage (1979) was a TV movie. The Gamilas homeworld is destroyed by a new enemy, the Black Nebula Empire.

Desslar, leader of the Gamilons, makes peace with the Yamato in order to fight the new alien threat.

The Black Nebula Empire returns in the movie Be Forever Yamato (1980). This time, the Earth is threatened.

It seems that the Black Nebulans are from the future. When the Yamato crew travels to the Black Nebula galaxy, they discover that they have traveled into a future where the Earth has been conquered.

The Galman and the Bolar are at war with each other, and this war threatens Earth. The Gamilons are related to the Galmans, and they liberated the Galmans from the Bolars.

The Earth is allied with the Galmans. The Yamato rescues an exiled queen, and both the Galmans and the Bolars fear her. The Bolars declare war on Earth.

The movie Final Yamato came out in 1983. This time, the enemy is a warrior race known as the Dinguil. The Dinguil plan to flood the Earth and make it their new home.

Final Yamato was not final. In 2009, the movie Space Battleship Yamato: Resurrection came out. It takes place in 2220, after Final Yamato.

Resurrection features a wandering black hole, which will wipe out the Earth. Mankind must be evacuated. Once again, there are aliens to fight, and the Yamato returns.

A manga, Cosmoship Yamato, was produced at about the same time as the original anime series. It ran from November 1974 to April 1975. Space Battleship Yamato was adapted for American audiences as Star Blazers. Star Blazers ran from 1979 to 1984. The Star Blazers version includes episodes from seasons 1, 2 and 3 of the anime.

People’s names were changed, and the Yamato became the Argo.

They also made some typical censorship changes for the English-language version. Alcohol references were removed. They avoided showing death or killing people. If scenes of death were unavoidable, the bad guys would be robots or people would narrowly escape off-screen.

In 1994, Yoshinobu Nishizaki made a sequel to Space Battleship Yamato, called Yamato 2520.

Nishizaki was one of the co-creators of the original series. Animator Leiji Matsumoto sued Nishizaki, and the series was left unfinished.

Three episodes were released as an OVA.

A live-action version of Space Battleship Yamato came out in 2010. The film is based on the original story of the 1974 anime. The film stars Takuya Kimura as Susumu Kodai, and Meisa Kuroki as Yuki Mori.

A new anime remake of the original series started in 2012. This is called either Star Blazers 2199 or Space Battleship Yamato 2199.

It was originally shown in movie theaters as a series of films. Later, it was shown on television. It makes seven movies or 26 episodes.

The 2199 series also had a 2014 movie, Space Battleship Yamato: A Voyage to Remember.

It is an adaptation of the Yamato II series and the Arrivederci Yamato movie.

It was released in movie theaters and streamed online by Japanese video services. In 2018, the series was broadcast on television. There were 26 episodes, or seven films.

Captain Juzo Okita — Captain of the Yamato. As captain, Okita is stern, calm and tough.

In Star Blazers, he is Abraham Avatar. He is elevated to admiral in the 2199 version.

Leader Abelt Dessler — Emperor of the Planet Gamilas. He is called Desslok in Star Blazers. Sometimes he is arrogant, while other times he is more polite.

In the second season, he ends up underneath Emperor Zowrdar (Zordar) of the Comet Empire. Eventually, he switches from an enemy to an ally of the Yamato.

Queen Starsha — Queen of Iscandar. Helps Earth by providing them with technology. She is one of the last remaining members of her race.

Susumu Kodai — In the first series, he is Tactical Division Officer of the space battleship. He ends up in command when Okita is unable to continue.

She is Nova Forrester in Star Blazers.

Star Blazers: Space Battleship Yamato 2199 and 2202 were available on Crunchyroll, but they have been removed.